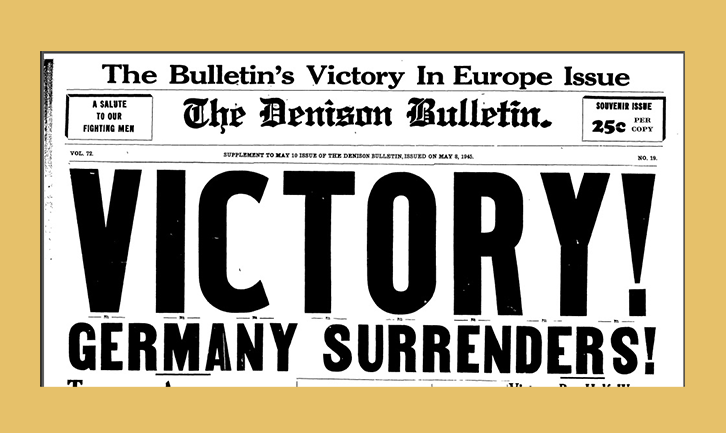 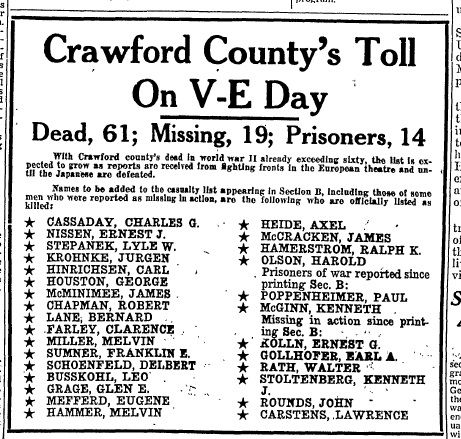 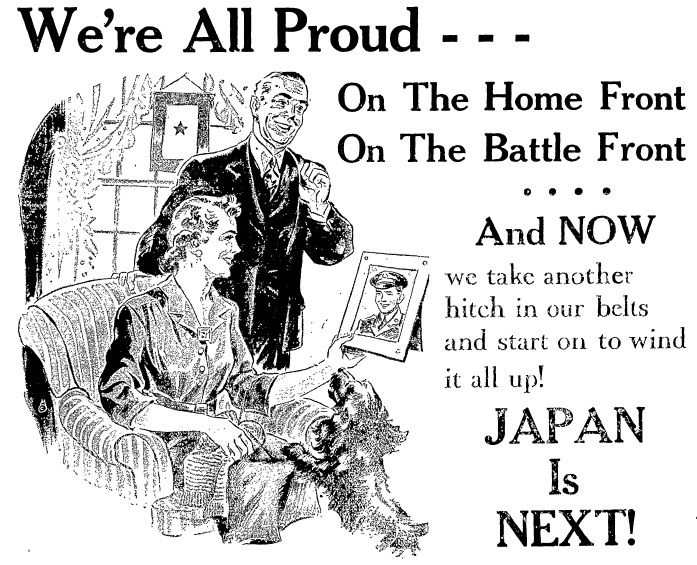 V-E Day – Victory in Europe Day – during World War II was formalized on this day 75 years ago.

The surrender of German armed forces was ordered on May 7, 1945, by Karl Dönitz, who became the head of state of Germany following Adolf Hitler’s suicide on April 30.

The signing of the formal surrender documents took place the next day, May 8, 1945.

Germany declared war on the United States on December 11, 1941, four days after the Japanese attack on Pearl Harbor.

The end of the war in Europe had been expected weeks before it took place.

The newspaper listed the momentous events of those 10 days:

Sunday, April 29: Death of Benito Mussolini at the hand of Italian patriots disclosed.

Friday, May 4: German armies in Holland, Denmark and northwest Germany lay down arms.

“News of Germany’s unconditional surrender was heralded in Denison at 9 a.m. when the air raid warning system was sounded, followed by the ringing of church bells. Church services opened one hour later,” the Bulletin reported.

According to the Review, “V-E Day in Denison was taken as a solemn occasion, with but little hilarity and celebration. And the public was fully responsive to the solemn mood.”

“It is estimated that at least 40,000,000 casualties resulted during the nearly six years of strife and terror which was started when Hitler’s arrogant armies invaded Poland on Sept. 1, 1939,” the Bulletin noted.

The full cost of the war would not be known for years to come, but part of the price appeared in the column next to the Review story of the Denison celebration.

“Donald Rice Killed in England,” the headline noted. Rice, of Deloit, was a bombardier with the 445th Bomber Group and had died just two weeks before. “His parents have been notified by the War Department,” the story stated.

Charles G. Cassaday, Robert Chapman, Ernest J. Nissen and Lyle W. Stepanek were among the unfortunate men to have a change of status confirmed.

Another story in the May 8 Bulletin related the reason for the subdued celebrations in Denison.

“Victory is but half won says Truman this morn,” a headline stated.

The other half of the victory was yet to come in the Pacific.

An advertisement for Doud Milling Company in the Bulletin’s special victory edition stated it clearly:

“We’re all proud --- on the home front, on the battle front; and now we take another hitch in our belts and start on to wind it all up! JAPAN is NEXT!”

V-J Day, Victory over Japan Day, was still more than three months away.