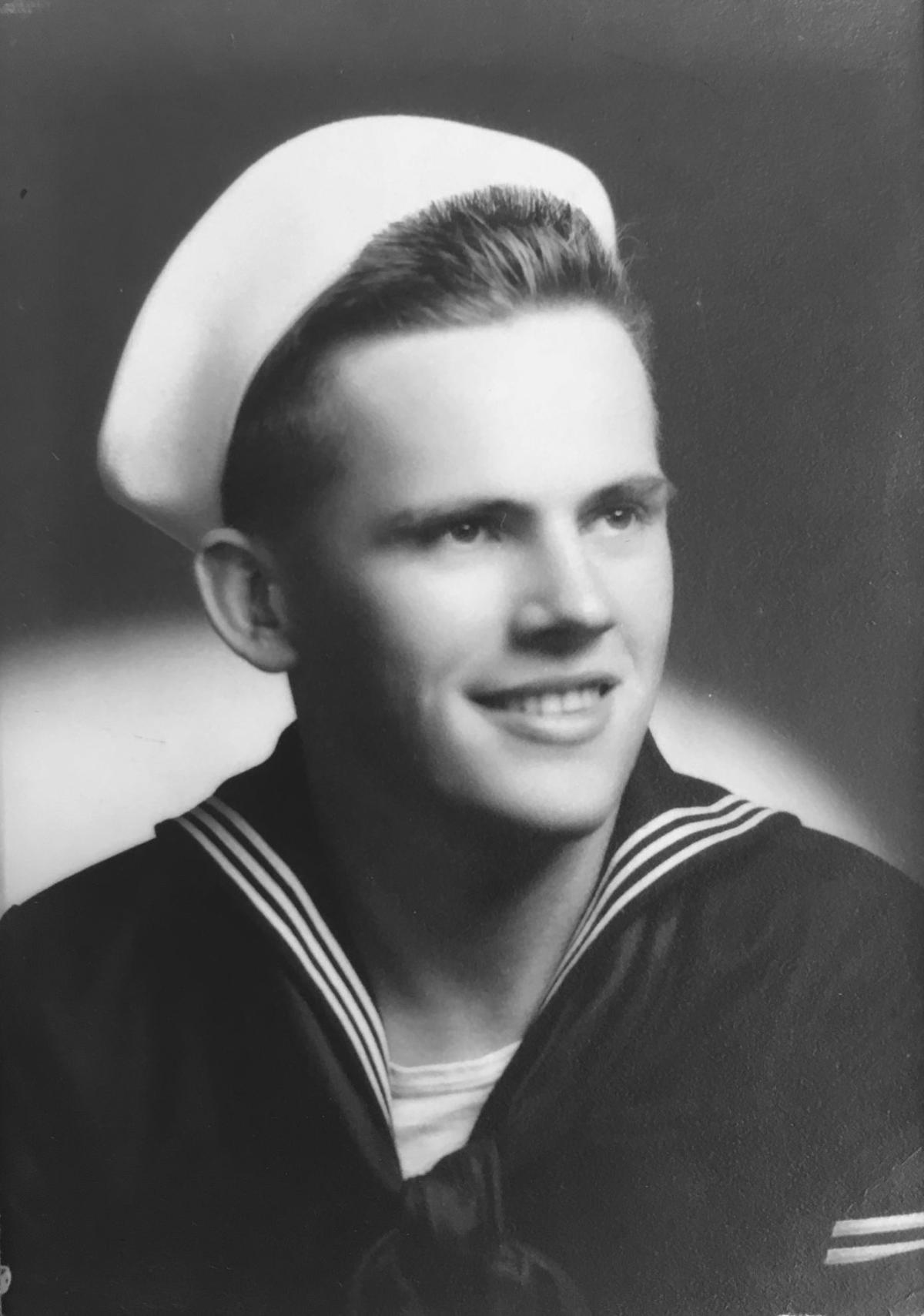 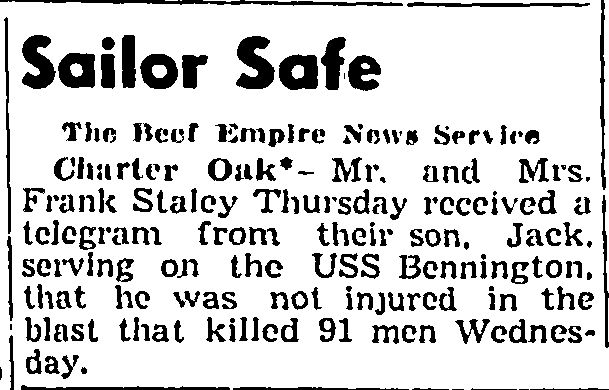 On May 26, 1954, Crawford County native Jack Staley was awake early.

“After being out to sea for two months, I was getting a little fidgety,” Staley said. “I got up a little early because I couldn’t sleep.”

He was aboard the aircraft carrier USS Bennington as a member of the aviation ordnance crew responsible for loading bombs and rockets onto the ship’s aircraft.

Staley was scheduled to leave USS Bennington in two days, which was one of the reasons he couldn’t sleep.

“I thought I might as well go up and eat,” Staley said.

He went to breakfast an hour earlier than usual – and that decision likely saved his life.

Staley grew up on a farm near Charter Oak.

On that May morning in 1954, Bennington was cruising off Rhode Island as deck

The ship was an Essex class aircraft carrier that had been built during World War II.

Bennington supported the Okinawa campaign in 1945 and the ship’s planes participated in attacks on a Japanese task force that culminated in the sinking of the Japanese battleship Yamato.

Bennington was recommissioned in 1952 after a two-year modernization program that equipped the ship to handle the jet aircraft that were coming into service at the time.

Improved hydraulic catapults were among the enhancements the ship received.

The new Type H, Mark 8 catapults were designed to accelerate a 15,500 pound load to 105 knots (121 mph) in 1.69 seconds, according to the specifications available at maritime.org.

While Staley was eating breakfast that morning, the catapults were already in use launching aircraft for pilot carrier qualification flights.

After breakfast, he went back to his bunk area.

“We heard a noise, but didn’t think too much about it,” Staley said.

In the forward part of the ship, hydraulic fluid from one of the catapults had leaked out and ignited.

According to a story published in Naval History Magazine, several crewmen said the first explosion sounded like a hammer striking a bulkhead.

Soon after, two much larger explosions ripped through the forward part of the ship.

“We didn’t know what had happened,” Staley said.

Bennington suffered severe internal damage and a fire raged for about 45 minutes.

“Anybody who was in the mess hall was killed there,” Staley said.

“We were told to stay in our area. After about an hour we were called down to be stretcher bearers and take people out of there. Some were injured and some were deceased.”

The dead and wounded were taken to the hangar bay.

Staley said he saw solid metal hatches that had been bent backward by the blasts.

One of the ship’s doctors had been killed.

The infirmary had beds for 60, but hundreds needed medical attention.

“There was hardly room to stand on the lower flight deck,” Staley said. “You had to watch where you were walking.”

Helicopters were used to ferry the wounded from the ship to shore.

Staley witnessed medics giving a thumbs-down sign for one individual who was about to be loaded onto an evacuation helicopter.

“That was it,” Staley said. “He was not going to go to the shore hospital.”

It was the second-worst peacetime disaster in U.S. Navy history.

Most of the deceased were killed by the blast and fire, but some died of asphyxiation at their posts while trying to bring the situation under control.

“When we pulled in to dock, I looked over and there were 24 hearses lined up. I counted them,” Staley said. “That will always stick in my mind.”

He was released to Quonset Point that day.

He remained at Quonset Station until his discharge two months later.

Staley hitchhiked all the way back to Charter Oak.

Bennington was his first and last ship.

The ship was repaired and served until 1970, when it was decommissioned. It remained on the Naval Vessel Register until 1989.

“I read in the paper that it was sold to a British firm and then it went to India for scrap iron,” Staley said.

Bennington was scrapped in 1994.

Investigators were unable to determine the exact chain of events that led to the explosions aboard the ship.

Hydraulic catapults had been implicated in other accidents and the disaster aboard the Bennington was the last straw.

In July 1954, the Navy announced that steam-powered catapults would be installed on all United States aircraft carriers.

Four years ago, Staley visited the Rhode Island memorial to the men who died aboard the ship.

He said he still thinks about that day.

“I wear my Bennington shirt and Bennington hat on Memorial Day and Veterans Day,” Staley said.