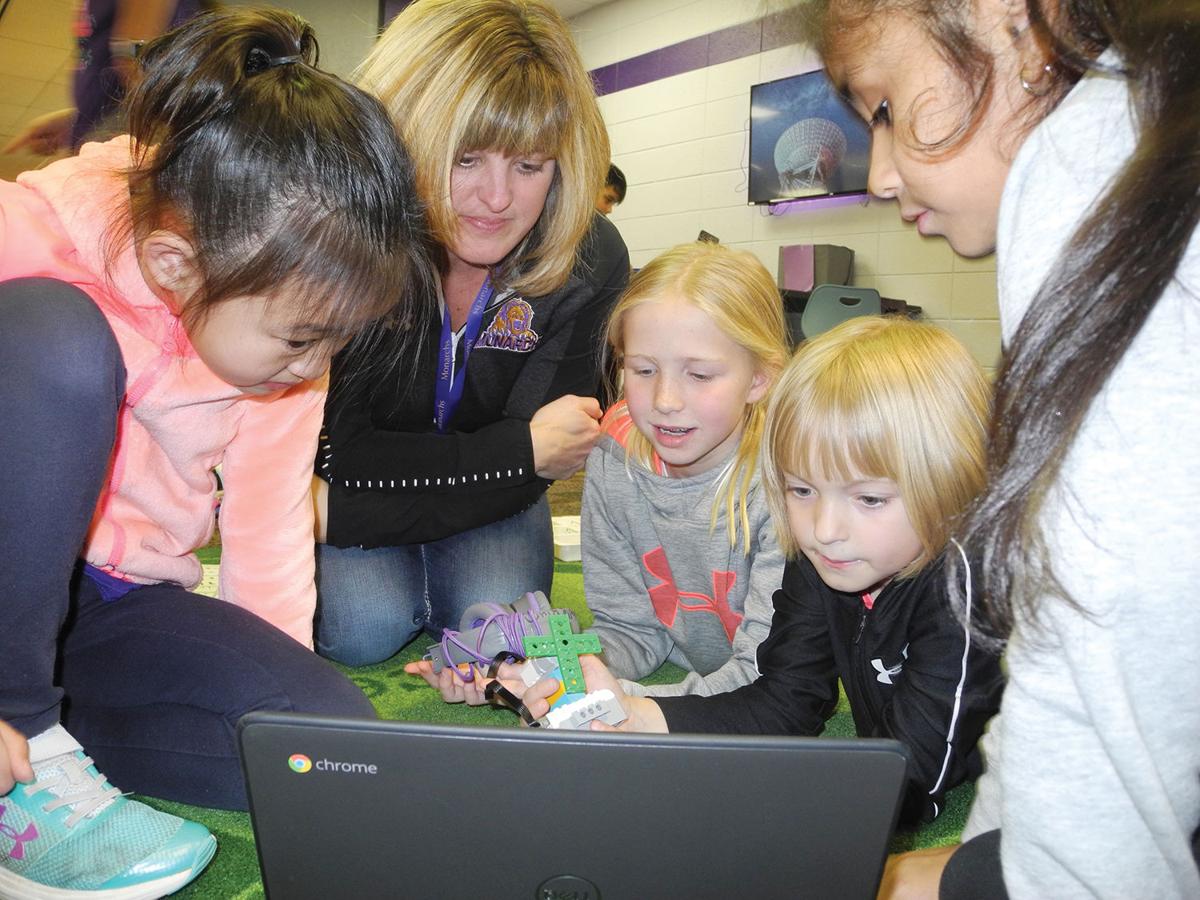 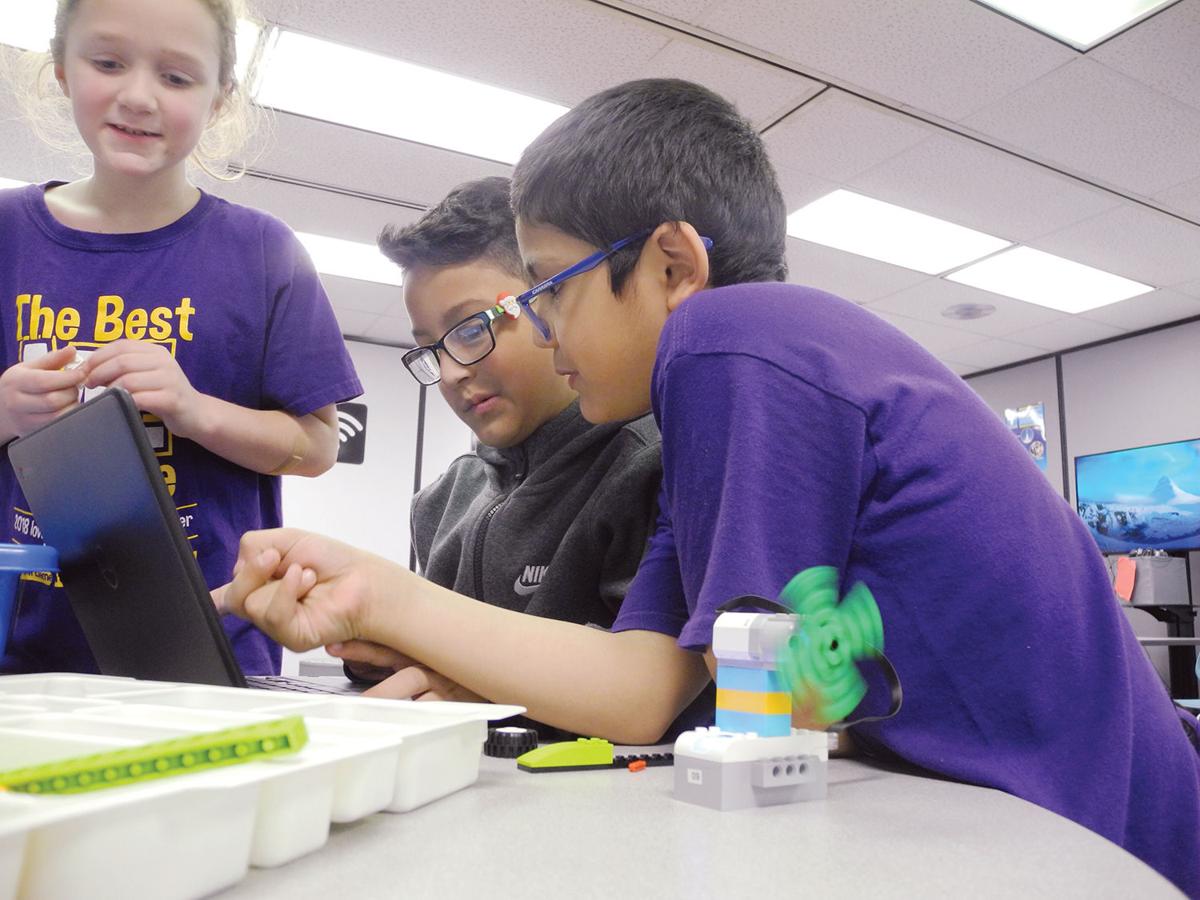 Olivia DeVore, Filiberto Gonzalez and Luis Valdez get the fan on their creation to spin after writing a code on their Chromebook. The fan is connected to the Chromebook by Bluetooth. Photos by Gordon Wolf 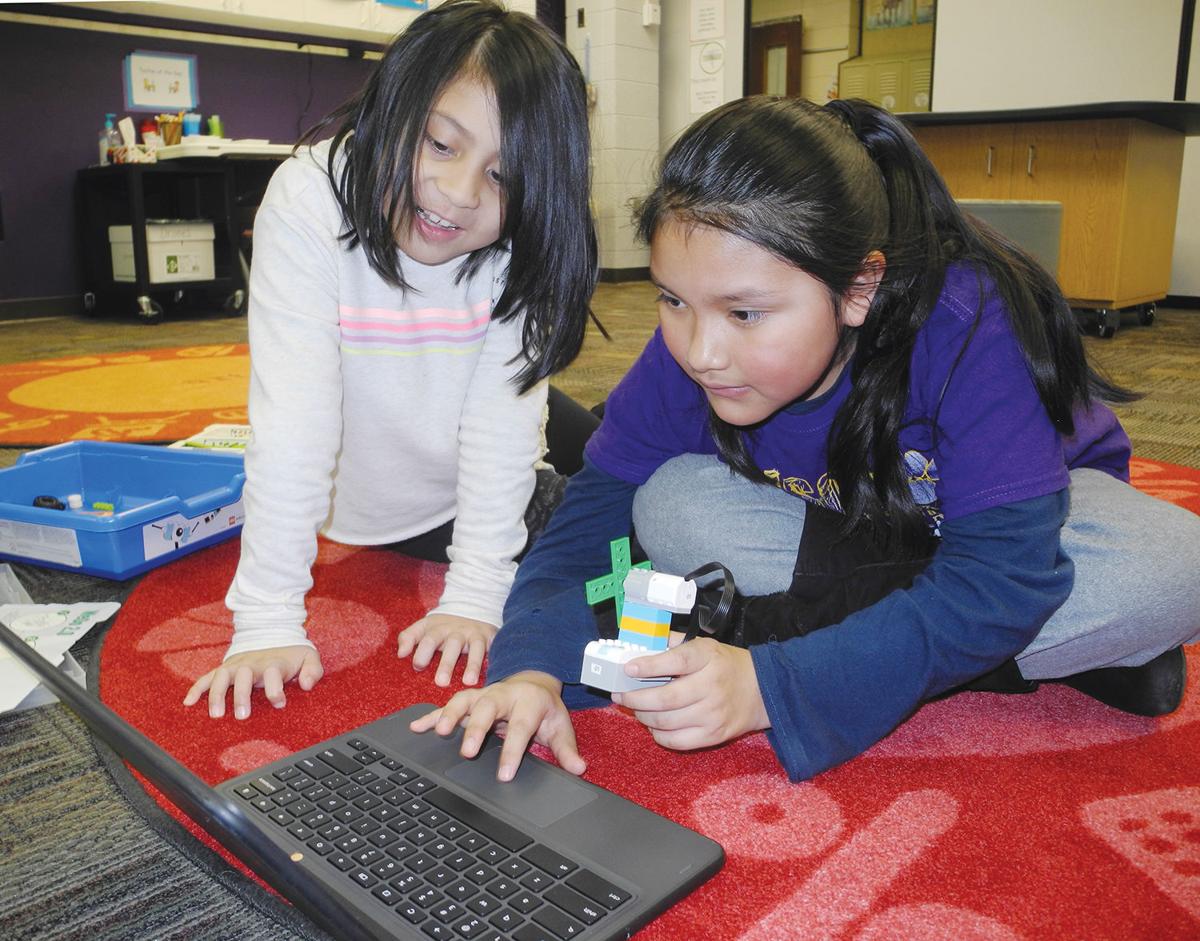 Valerie Carrillo and Yoselin Martin write code on a Chromebook to make the fan move. Photos by Gordon Wolf 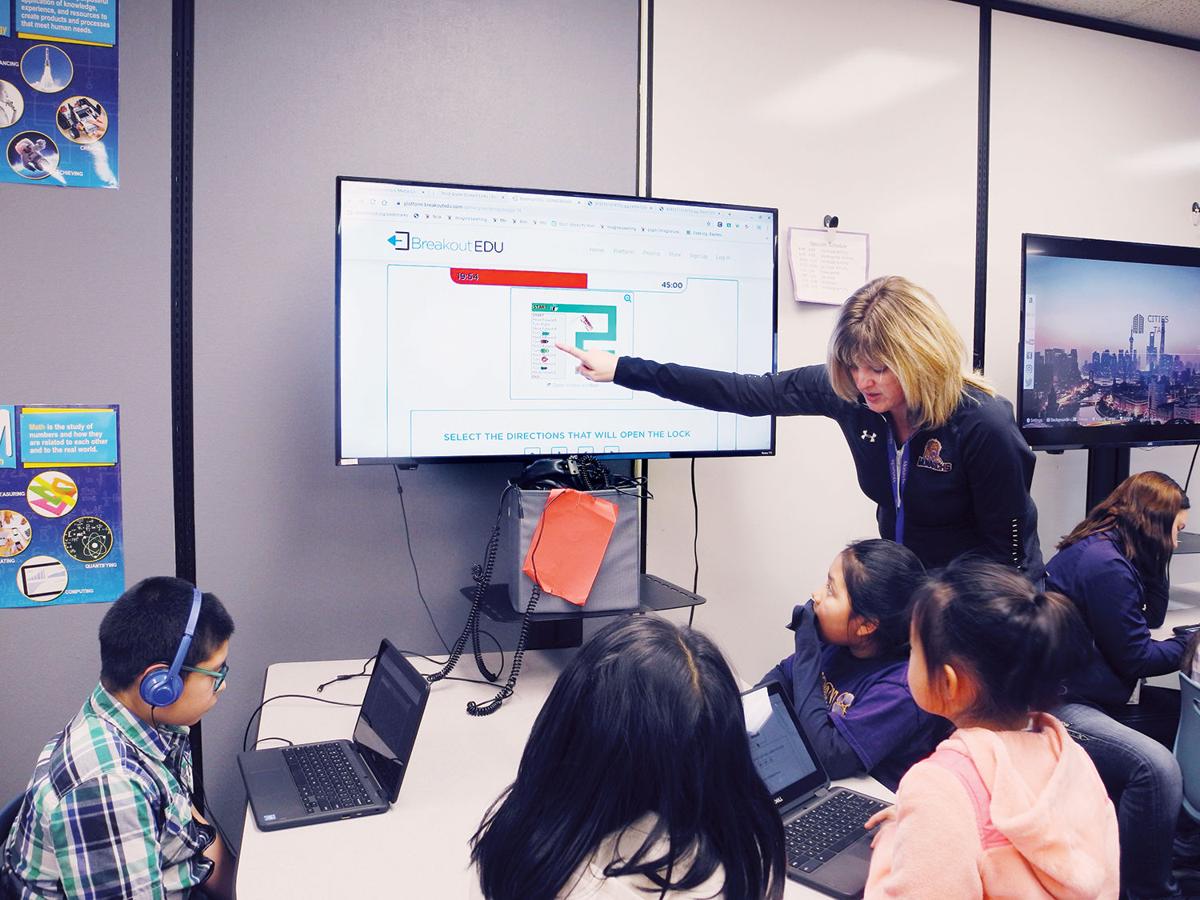 Olivia DeVore, Filiberto Gonzalez and Luis Valdez get the fan on their creation to spin after writing a code on their Chromebook. The fan is connected to the Chromebook by Bluetooth. Photos by Gordon Wolf

Valerie Carrillo and Yoselin Martin write code on a Chromebook to make the fan move. Photos by Gordon Wolf

Earlier this month, students at Denison Elementary School took part in the Hour of Code, an annual event to increase participation in computer science by exposing students of all ages to computer science, to show that it is fun and creative.

Hour of Code takes place each year during Computer Science Education Week, which this year was December 9-15.

Information from the Hour of Code website (https://hourofcode.com/us) says the observance began as a one-hour introduction to computer science “designed to demystify ‘code’ and to show that anybody can learn the basics of computer coding.

At Denison Elementary, all students from kindergarten through third grade learn some level of coding, not just during the Hour of Code but throughout the year.

They said it’s similar to learning a foreign language - the younger you are, the easier it will be to retain.

Younger students are taught Block-Based Coding that allows students to drag blocks of code together in a puzzle format in order to make their programs run.

As students get older they are exposed to the coding language of JavaScript or Python. Johnson and Gierstorf said this language allows students to type in a series of words or commands in order to run their program.

“We have also found that employers are looking for employees who can communicate, collaborate, be creative and have critical thinking skills (the 4 C’s),” said Gierstorf. “Coding programs allow students to practice all four of these skills.

“They can communicate and collaborate with friends as they try to solve a task in coding.

“Many of the coding puzzles give students a chance to be creative as they design their own picture, dance moves or computer games. Students quickly learn that they don’t always get their program to run correctly the first time, so they have to use critical thinking in order to debug their program to fix any mistakes.”

While the students are concentrating on solving the coding challenges, they are absorbing and development other skills, such as troubleshooting and sequencing.

“When students are looking for errors in their programs, they are troubleshooting and rethinking about the sequence of their program without even realizing what they are doing,” said Gierstorf.

Johnson and Gierstorf said that as students are becoming more proficient in coding, they are seeing teachers at the elementary level wanting to have their students write multiplication coding games or create stories using Scratch, another free coding program.

“They are also trying out their coding skills with a robot called the Hummingbird,” Johnson said. “The middle school students transition into using JavaScript and HTML to create a web page, a video game, and an app prototype,” he added.

Many of today’s elementary school students will have occupations that don’t yet exist. Johnson and Gierstorf said these jobs will most likely involve technology in some aspects, and while not all students will go on to become computer programmers, the problem-solving skills that programming requires will enable them to be successful.

Gierstorf and Johnson said a lot of the coding lessons at the elementary level are based on using code.org, a free program that provides students with a variety of challenges that require them to write a code in order to solve a problem.

The problems promote critical thinking as they become more challenging as the students move through the puzzles, they explained.

Code.org also engages students by using characters that are familiar to them.

“For example, some puzzles require Scrat (from the movie Ice Age) to be programmed to get to his acorn,” said Gierstorf. “Other puzzles ask students to program Angry Birds to reach a certain destination or program characters to perform certain dance moves.”

The classroom changes extend to the teachers, too.

“My approach to teaching has definitely changed,” said Gierstorf. “Previously my instruction was more teacher-directed while students created an end project that all looked the same.

“Although I still give some direction on how coding and robotics work, students are given more time to explore and experiment to see what they create using coding. Through this approach, I have found that students are much more engaged, and it can be difficult to get them logged out of their computers at the end of their class time.”

Lessons from the Exploration Station

In the first session, the third-graders were participating in what Gierstorf called a digital breakout.

“This lesson provided students with several clues, and those clues (related to coding) helped them unlock four different locks. Their challenge was to break out before the end of class,” she explained.

Students had the choice of working alone, with a partner, or in a small group. Students working in a group were able to cast their Chromebooks to the various displays in the Exploration Station.

“This allows the groups to collaborate easier as they work through their programs together,” Gierstorf explained.

In a second session, the third graders were working in groups using Lego kits to build certain structures.

Those structures ranged from a glowing snail to a cooling fan or a moving satellite.

After they were done building their structure, students connected their creation to their Chromebook via Bluetooth, wrote a computer program and made their snail change color, and made their fan or satellite move, Gierstorf said.

“Other coding blocks allow their creation to make different sounds while setting the speed of their movement,” she continued. “The variety of coding blocks is where students can experiment, be creative and make their design unique to their group.”

Coding and computer science education has expanded this year at Denison Elementary School through the Exploration Station.

The Exploration Station was created by revamping the existing computer lab.

The rows of traditional, rectangular tables and stationary desktop computers for each student were replaced with pods, each equipped with a large TV display to allow students to work together to solve problems.

Portable Chromebook laptops and tablets replaced the desktop computers, and equipment to teach coding was purchased.

A $50,000 grant through the Computer Science is Elementary project and funding from the school district was used to redesign the computer lab into a STEM (Science, Technology, Engineering and Mathematics) classroom by the beginning of this school year.