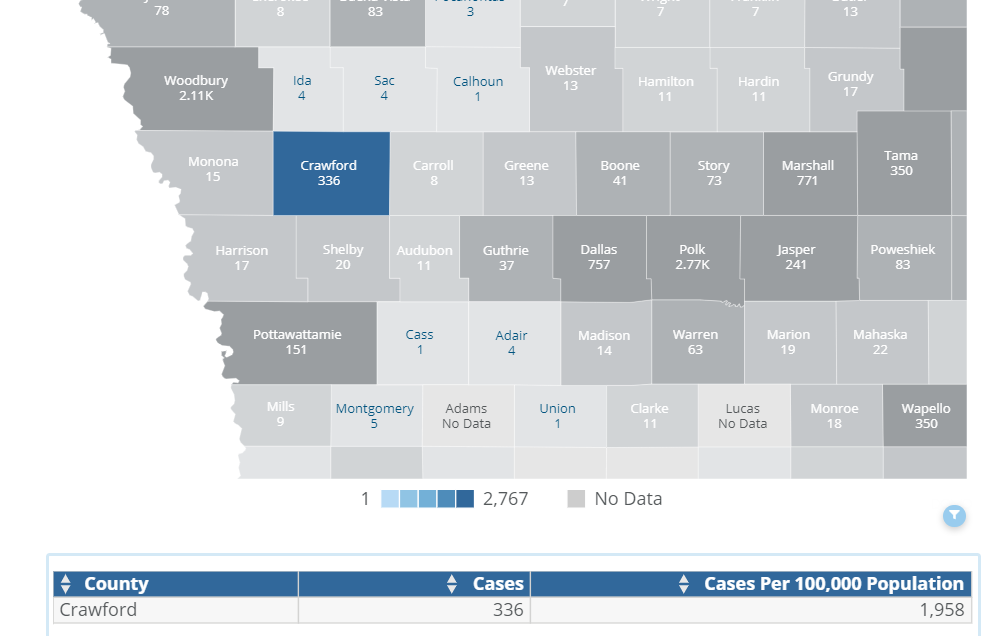 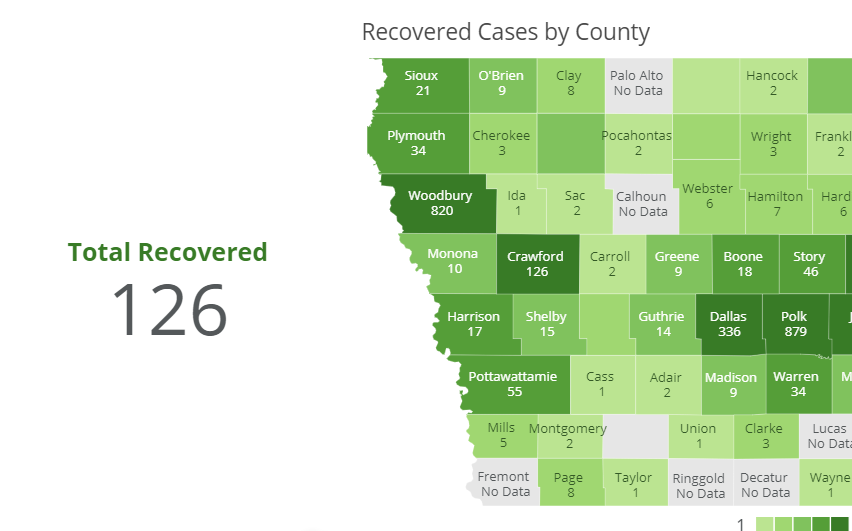 Note: Figures in the headline are from coronavirus.iowa.gov, which posts statistics as of the day before. Friday's posted positive COVID-19 count for Crawford County was 336 (for statistics as of May 14).

Those following the state’s coronavirus statistics website, coronavirus.iowa.gov, noticed a sharp increase in the number of positive COVID-19 cases in Crawford County from Wednesday to Thursday, from 207 positive cases to 300.

A backlog in cases may have been the reason for a one-day jump of 93 positive cases.

Kim Fineran, director of Crawford County Public Health, said her department received 81 notifications through the state system on Wednesday, and that 62 of those tests had been completed anywhere from seven to 14 days prior to the notifications coming in.

She assumed that these were among the backlog of tests at the State Hygienic Lab that Gov. Kim Reynolds spoke about during one of her press conferences this week.

Fineran said that testing continues at a fairly steady level by the medical providers in the community.

And, after a soft rollout on Saturday and Sunday, the Test Iowa site at Denison Middle School began operating for full days on Monday.

Today is the last day the Test Iowa site in Denison is scheduled to be open. People must take the assessment on the website, testiowa.com, to determine if they are eligible to receive a test. People can also call 211.

No count on the number of tests conducted at the Test Iowa site at Denison Middle School has been released yet by the state.

However, during yesterday’s news conference, Reynolds said that more than 4,300 individuals had been tested throughout the state through Test Iowa since that initiative began 23 days ago.

On Saturday, the eighth Test Iowa site will open in Storm Lake, the governor pointed out.

Denison Mayor Pam Soseman said getting the Test Iowa site in Denison was a challenge. She pointed out it wasn’t just her but many people pushing to get a testing site in the community.

Soseman added she is ecstatic that the Test Iowa site is in Denison.

“I just hope that as many people as possible take advantage of it, and I know the survey (assessment) created some difficulty for people wanting to be tested and they were denied testing,” the mayor added. “I realize when they probably started this they weren’t as familiar with the asymptomatic cases as they are now.”

Yesterday the governor commented that the parameters of the assessment would be expanded.

Soseman said that since Test Iowa opened in Denison, the number of calls she had been receiving from concerned individuals has slowed, but she added that she still welcomes calls.

Fineran said that testing for staff at Quality Foods, Smithfield (both Denison and Carroll locations), and Monogram, along with long-term care facilities, was part of the request that was submitted to get the site in Denison.

“Testing was part of a large community effort and we are very happy that it is available locally,” she said.

Another number that continues to increase in Crawford County is the individuals who tested positive and have now recovered. As of Thursday, that number was 110.

No more COVID-19 deaths for Crawford County have been reported since April 11; that was the only death reported for the county. The state’s COVID-19 death toll was listed at 318 on the state’s website yesterday.

It should be noted that the data posted on coronavirus.iowa.gov is for data as of the day before.

In her news conference on Thursday, Reynolds again emphasized that those 65 years of age and older and those with existing health conditions continue to be the most vulnerable victims of COVID-19. She added that, sadly, 57 percent of all COVID-19 deaths in the state are among residents of long-term care facilities.

Of the current positive cases among county residents, three are hospitalized.

On Wednesday, Reynolds signed a new proclamation continuing the Public Health Disaster Emergency. The proclamation permits salons, barbershops, and massage and tattoo establishments to reopen throughout Iowa in a limited fashion with appropriate public health measures in place. It also permits restaurants (but not bars), fitness centers, libraries and race tracks to reopen in the 22 counties where they have remained closed. The changes were effective as of 5 a.m. today.