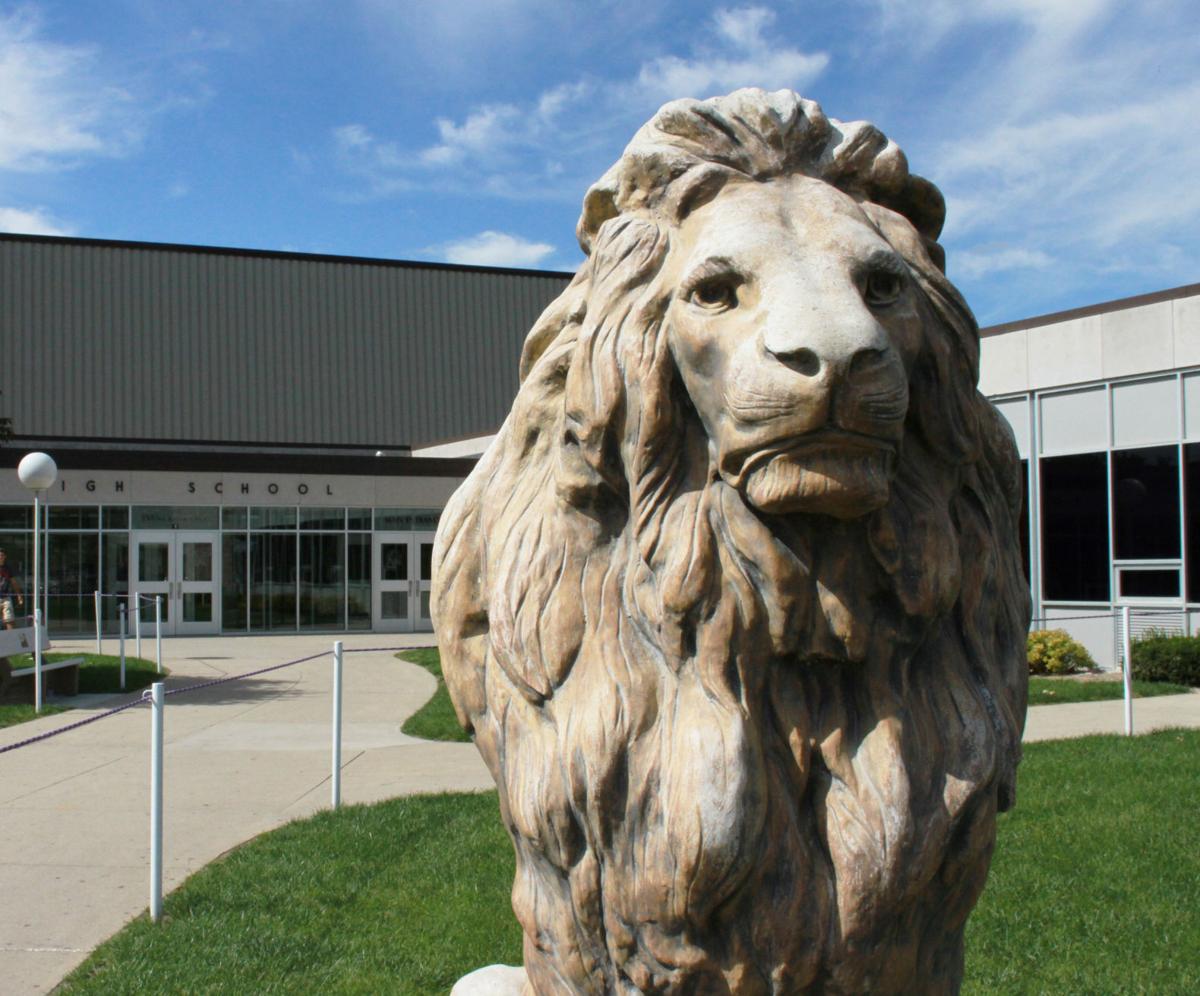 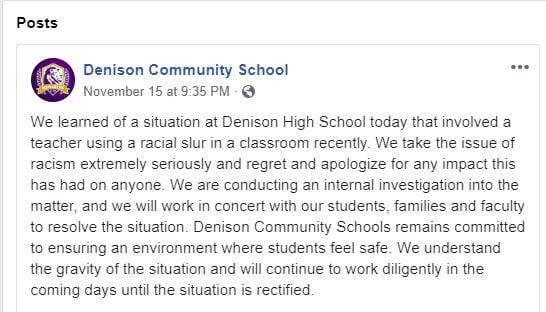 A teacher at Denison High School is at the center of a social media firestorm and increasing media coverage concerning her use of the “N” word when explaining to a student the pejoratives used by an individual being studied in a government class lesson.

Crystal Holt, who has been a full-time teacher at Denison High School since 1996 and a government teacher for nearly all of those years, was placed on paid administrative leave Sunday, she said.

The turmoil did not start until a day after the word was said. A highly vocal discussion, which has been posted to Facebook, came not from the government class students but from a different mix of students attending a second-block English Class on Friday.

Holt explained she was teaching a lesson on the death penalty in her first-block government class last Thursday morning. Students were divided into two mock juries to analyze a case for its aggravating and mitigating circumstances. They were asked to identify the sentence they believe should be given.

The case centered on Sgt. Kenneth Junior French who, on August 6, 1993, entered a restaurant in North Carolina and killed four people and injured six with a pump shotgun.

“I was going back-and-forth between the mock juries to see what was going on, and as a teacher you assess and see what they’re writing. And one of the groups had put up hate crimes, which is OK, because that’s part of the case,” said Holt.

Holt said she asked the students why they had listed hate crimes and that one of the students responded that French had used pejorative terms.

She explained to the Denison Bulletin and Review that the reading the students had about the case said French was at a friend’s party and was overhead telling the people to shoot and kill black people, using pejorative terms.

One of the students in that mock jury asked what pejorative means, Holt said. She answered that it means derogatory. The student asked what derogatory means.

Holt said the students in that mock jury did not appear to react to the use of the “N” word. She does not think students in the other mock trial heard it as they were busy discussing the case.

“We had that discussion and nothing was said. I went back and forth to the other group and they continued to debate and to figure out what the sentence should be,” she said.

Holt said nothing was said to her in that first-block class or all day on Thursday.

She said during the second-block class period on Friday, Nancy McCarville, the dean of students, pulled her out of class and asked Holt if she had used the “N” word in class. Holt answered that she had and when asked how she used it, she described the death penalty case students were discussing.

Holt said she was asked to speak to students in another teacher’s class – a second-block English class - to explain what had happened in government class the day before because the students seemed to be very upset.

She doesn’t believe that any students from the first-block government class on Thursday were in the second-block English class on Friday, but she can’t be sure without checking class rosters, and she can’t do that because she is on paid administrative leave.

In the recording of the discussion posted on Facebook, Holt can be heard explaining the context in which she said the “N” word, and the English teacher can also be heard talking with the students about context.

Holt said the students were very upset, deeply offended and she’s heard emotionally hurt because she used that term in a teaching context.

Some students walked out of the English class, Holt said.

Holt said she has used the French case in her government class for nearly 20 years.

“The unit is very powerful and the lesson is very good. I do change lessons plans but this is a really good case because it has so many elements that students need to discuss,” Holt said. “That’s the point – critical thinking and to be able to discuss it. That’s one of the points of that case because it does deal with racism and it’s a good case to highlight the issues of racism.”

She said in the years she has used the French case, there’s never been an issue like the one that developed last week.

She added that she knows the “N” word has come up in other classes she has taught in the past.

She cited a quote from Supreme Court Justice Louise Brandeis: “Sunlight is said to be the best of disinfectants.”

Holt said, “As a teacher, we have to use disinfectant for social diseases, and one of the things about teaching is we have to attack that, and racism is a social disease, so I think it’s’ something we need to hit head-on.

“I think that’s what we need to do and that’s why I thought the case I’ve been using is one of those tools to be able to do that. And the classroom is the perfect place, it’s the perfect setting to expose it, because our hope is to be able to eliminate it. It’s a horrible social disease,” she added.

Holt said she talked to Superintendent Mike Pardun in her classroom on Friday and then on Saturday morning talked with Pardun in his office with Principal Dave Wiebers on the phone because he was unable to attend in person.

A post to the Denison Community School Facebook page at 9:35 p.m. on Friday says, “We learned of a situation at Denison High School today that involved a teacher using a racial slur in a classroom recently. We take the issue of racism extremely seriously and regret and apologize for any impact this has had on anyone. We are conducting an internal investigation into the matter, and we will work in concert with our students, families and faculty to resolve the situation. Denison Community Schools remains committed to ensuring an environment where students feel safe. We understand the gravity of the situation and will continue to work diligently in the coming days until the situation is rectified.”

She said the school district’s post on Facebook makes her look guilty because people could assume she’s just saying the derogatory term in general to people.

The Denison Bulletin and Review has received two phone calls that said some students are planning a walk-out and rally today at the school.

“It breaks my heart that there’s this division in our school, there’s separation and disunity and even outright hatred and now it’s in our community,” said Holt. “And that’s the point of having this exposed so you can discuss it. You can’t put it in the lock box and say that is not a permissible thing to discuss and talk about.

“Not that I’m saying to use the word over and over, but you’ve got to be able to discuss it, otherwise that’s why we’re here today in 2019 because people are so offended and so hurt instead of having that discussion that’s difficult.”

“It breaks my heart that there’s this division in our school, there’s separation and disunity and even outright hatred and now it’s in our community,” said Holt. “And that’s the point of having this exposed so you can discuss it. You can’t put it in the lock box and say that is not a permissible thing to discuss and talk about.

“Not that I’m saying to use the word over and over, but you’ve got to be able to discuss it, otherwise that’s why we’re here today in 2019 because people are so offended and so hurt instead of having that discussion that’s difficult.”

Holt grew up in Denison and is a Denison High School graduate. She said she chose to come back to her community and is planning to stay in Denison forever, adding that many generations of her family have lived in the community for years.

Holt said she currently serves on the high school building’s leadership team, which helps with teaching instruction and building operation climate, and added that she was a model teacher, which helps other teachers in their teaching skills. She also served on the Iowa Core committee to write social studies standards.

Holt used to be involved in the Science Bound program at the high school level but let that go. She said the program is continuing and had a high percentage of program participants who went on to attend Iowa State University. She been a student senate sponsor for a number of years because it is a school-building, community-building, student-led activity that teaches skills.

She said she and her husband, Steve (Rep. Steve Holt) have taken in high school kids who are 18 and have been kicked out of the house by their parents and had no place to go.

Holt works with the community’s cultural diversity committee and is excited because it was revamped and has a new focus. She teaches citizenship classes on Thursday nights.

“I do all those things because that’s what we’re supposed to do, and to make our community vibrant and strong and be involved in all the different activities with the kids,” she said.

“I guess that’s frustrating because I have ties and connection, and it’s hard to be put on administrative leave when you love teaching and you think you could be helping to fix this problem that we’re dealing with.”

A voice message was left for Denison Community School Superintendent Mike Pardun to comment on the situation; he was not in the office at the time the call was made. An email was also sent to Pardun. As of press time neither had been responded to.

Denison Community Schools had teacher inservice on Monday instead of classes.

Students filled the circle by the Wall of Pride outside Denison High School at around 10 a.m. today in a walk-out and rally and to ask the adm…

Teacher to transition back into classroom

I think this is ridiculous. I think the students needed an excuse to skip school or class. I come from a family of multiple races. This is a part of history. How else is someone to learn from the past if they don’t know the past.