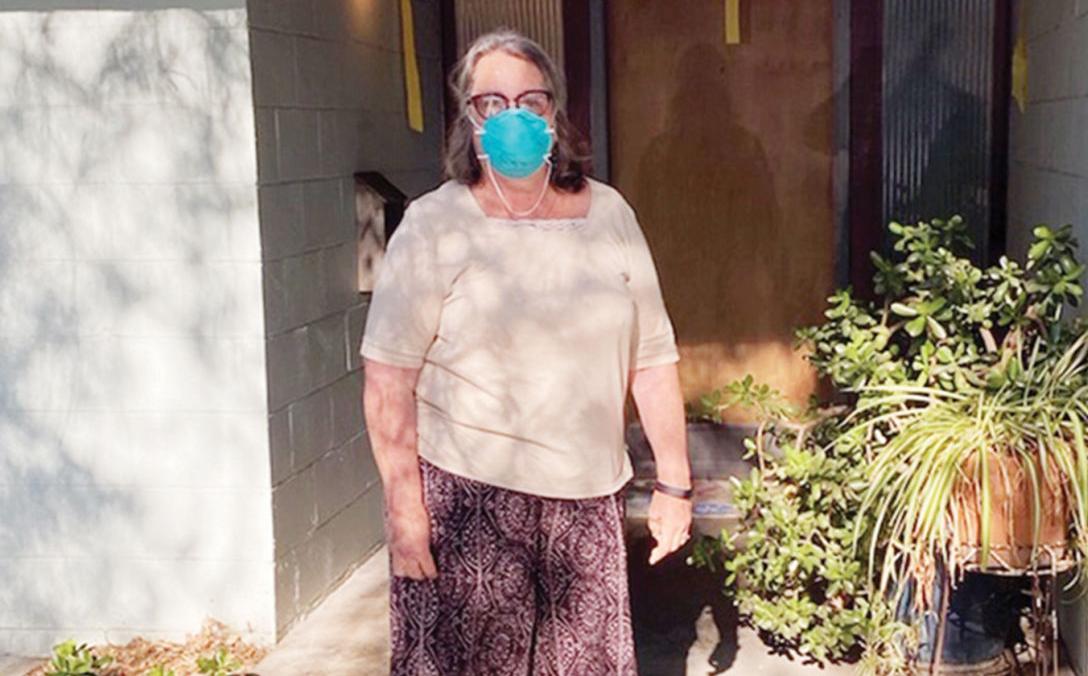 Janet Cornelius back at home in Sacramento after being quarantined from her cruise aboard the Grand Princess.  Photo submitted 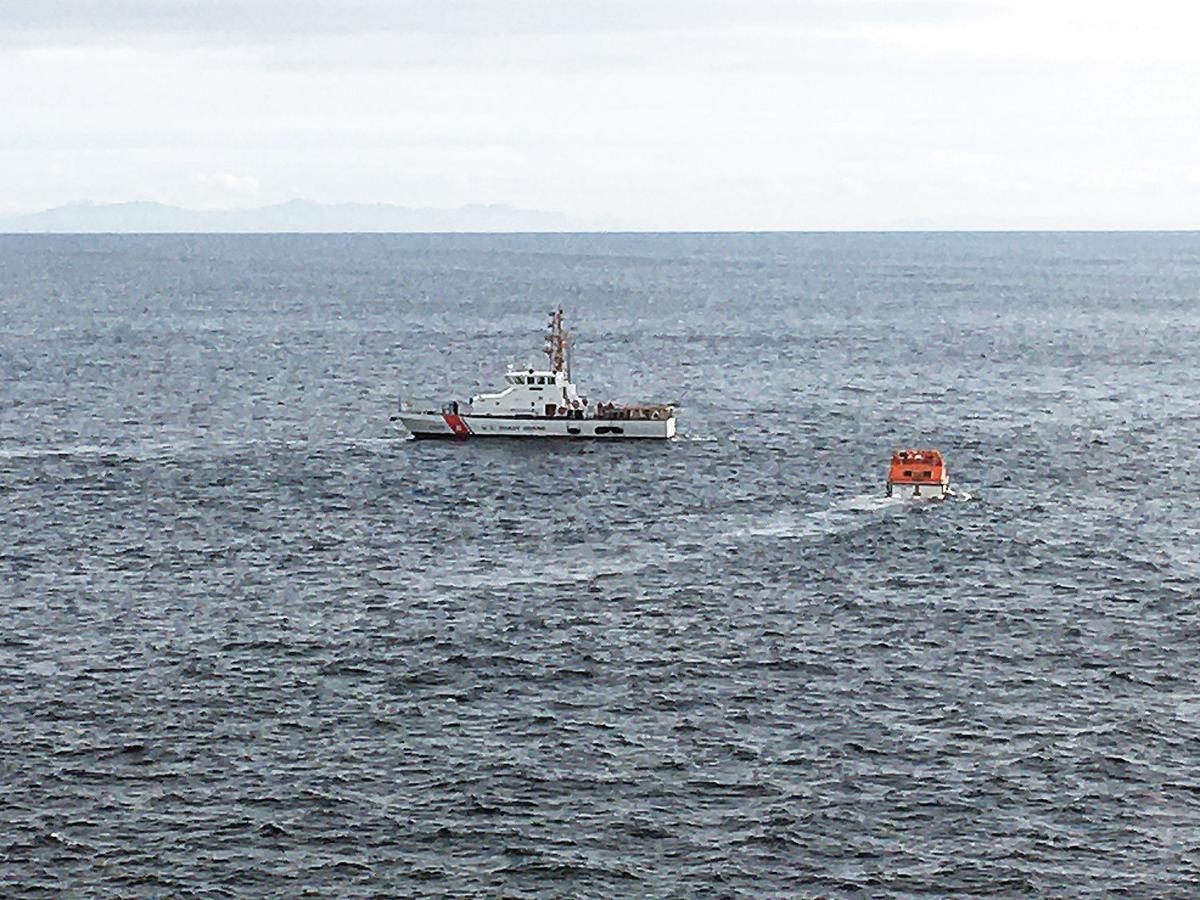 A photo taken from the cruise ship Grand Princess of people being transferred to a Coast Guard boat.  Photo submitted 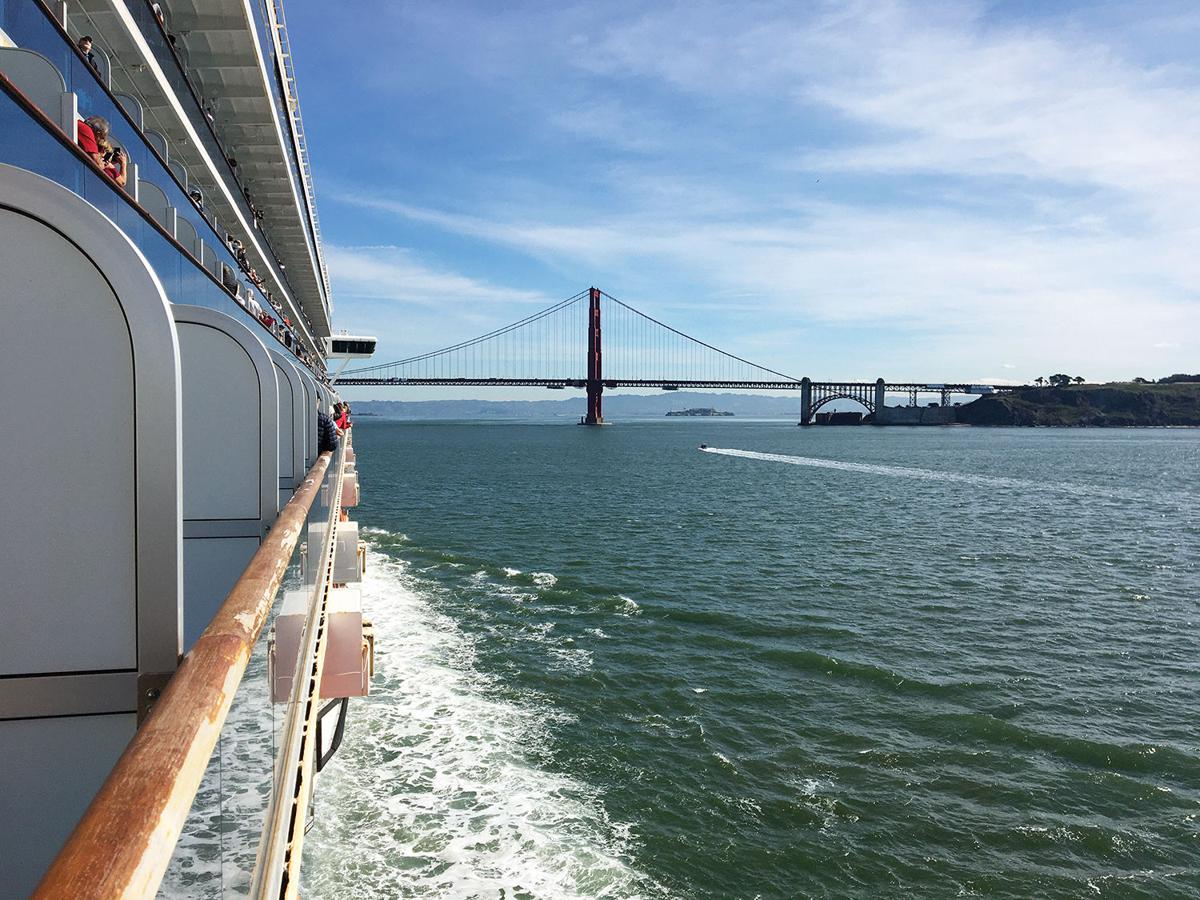 Janet Cornelius took this photo from the balcony of her cabin aboard the Grand Princess as the cruise ship was heading toward the Golden Gate Bridge. It would eventually dock at a commercial pier in Oakland on March 9. 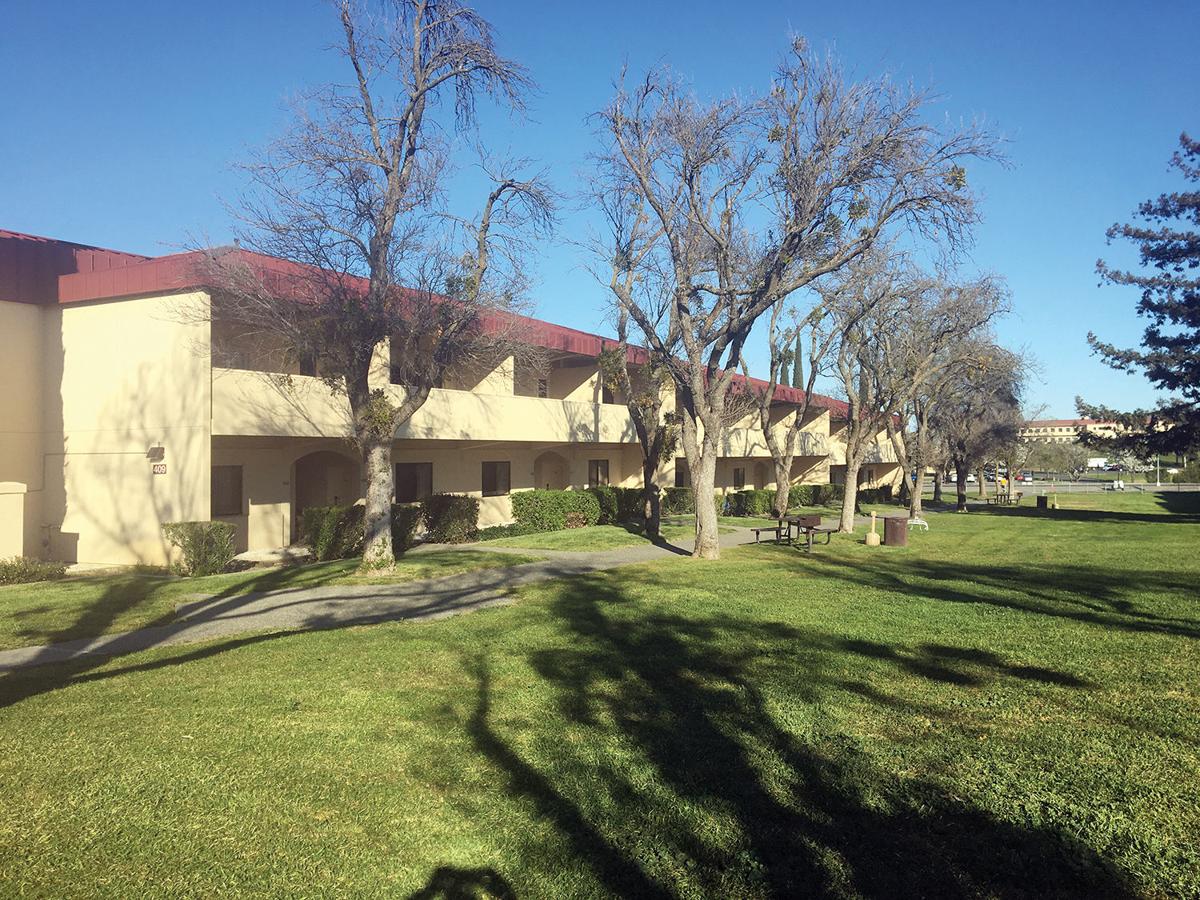 A view of the housing area that Janet Cornelius stayed at on the Travis Air Force Base in California. She went there for quarantine after disembarking from the Grand Princess cruise ship.

Janet Cornelius back at home in Sacramento after being quarantined from her cruise aboard the Grand Princess.  Photo submitted

A photo taken from the cruise ship Grand Princess of people being transferred to a Coast Guard boat.  Photo submitted

Janet Cornelius took this photo from the balcony of her cabin aboard the Grand Princess as the cruise ship was heading toward the Golden Gate Bridge. It would eventually dock at a commercial pier in Oakland on March 9.

A view of the housing area that Janet Cornelius stayed at on the Travis Air Force Base in California. She went there for quarantine after disembarking from the Grand Princess cruise ship.

When former Denison resident Janet Cornelius decided to go on a cruise to Hawaii, she never envisioned becoming part of a national and international story about a ship that, for a while, had no port.

She was part of a group of 11 that left San Francisco on February 21 aboard the Grand Princess to head for Hawaii and then, on the way back, stop in Ensenada, Mexico, before docking in San Francisco on March 7.

The Grand Princess did not make the stop in Ensenada nor did it dock in San Francisco on March 7. It ended up docking in Oakland on March 9.

The reason - the coronavirus.

After being in isolation on the ship and at Travis Air Force Base in Fairfield, California, Cornelius is at her home in Sacramento, as of March 17, along with her wife and her wife’s mother. They will be in quarantine at their home until March 31.

Cornelius is a 1971 graduate of Denison High School. Her father, Ted Cornelius, owned Ted’s Champlin in Denison and also owned the “It’ll Do,” which was located in the Little China building in uptown Denison.

The purpose of the cruise to Hawaii was to celebrate her mother-in-law’s 90th birthday. The Grand Princess had made its four-day trip to Hawaii, and the passengers had spent about four days there.

Around the second day of the four-day trip back, the ship veered off its course to Ensenada and began heading toward the San Francisco area after receiving information about the man who had tested positive for the coronavirus.

Cornelius said the passengers were confined to their cabins on Thursday, March 5.

“They told us had there had been a case of coronavirus on the ship prior to our cruise. At that point, nobody on the ship had been tested but they also had some crew members that had taken ill, including our waiter. The last two nights that we had dinner in the dining room, he was not there. He was ill,” she said.

Some steps to limit exposure had been taken in the days before passengers were confined to their cabins.

“When we went to the buffet, we couldn’t serve ourselves. The crew would use tongs. That was the first step. They did that for a day or two, and then we were confined to our cabins,” Cornelius said.

She added the ship’s staff was in contact with officials with the Centers for Disease Control (CDC) the entire time.

When passengers were confined to their cabins, they were given free access to the Wi-Fi.

“They also had an intranet on board the ship that we could log into, so with our cell phones we were all communicating with each other – the 11 of us,” she said.

“We would take pictures off our balcony and send them to others to show them what was going on,” she said.

The 11 in the group were in six cabins – two to a cabin with one person alone in the sixth cabin. A 12th person in the group decided not to go on the cruise because she was concerned about the coronavirus, said Cornelius. At that time, the big news was about the Diamond Princess with its cases of coronavirus. That ship was on a cruise out of Yokohama.

During the time the Grand Princess passengers were confined to their cabins, crew members would come around with meals and gave everyone masks.

“I was very grateful that we had upsized our cabin, so we had a sofa area where we could eat,” said Cornelius. “One of the cousins had an inside cabin.”

Cornelius joked that if that had been her, they would have had to pull her out in a straightjacket. But the cousin did well with the inside cabin by Facetiming with her kids and grandkids.

After the Grand Princess docked in Oakland around noon on March 9, some passengers disembarked that day. Other left the ship on Tuesday, including Cornelius.

But it took a while before Oakland became the destination.

“They were trying to figure out where to take us so we were circling around off the coast outside of San Francisco,” Cornelius said.

“I was very unhappy with the president telling us that we could not dock. That it was ‘not our fault.’ I am an American citizen. We left from an American city and were returning so I was outraged when I heard that statement,” she added.

When the ship got close to the Farallon Islands, where a Coast Guard base is located, a Coast Guard boat came out with some test kits. A helicopter also delivered test kits, said Cornelius.

She said of the people tested, 19 crew members and two passengers tested positive at that time.

Her mother-in-law disembarked on Monday and was hospitalized. She ended up testing positive and was put in isolation in a facility near Monterrey, along with her daughter.

Some in the group of 11 were from Texas and were flown to Lackland Air Force Base near San Antonio.

The cousin who had the inside cabin ended up in isolation in southern California.

Three, including, Cornelius ended up at Travis Air Force Base.

Cornelius was not tested.

“We were given a choice whether or not to get tested. A lot of people opted not to because they told us if they didn’t have the test results back before we were to leave, we wouldn’t be able to leave. They’ve since rescinded that,” she explained.

Cornelius said Travis Air Force Base had several places where cruise passengers were isolated. One was a four-story hotel. Cornelius ended up in another area that had a series of individual buildings. She was isolated in what could be described as a small, one-bedroom apartment with a kitchenette and a separate living area.

“I felt guilty because I was all by myself,” she said.

Meals were catered and twice a day temperatures were taken.

A temporary chain link fence had been put up so those in isolation could go out and walk.

“We just had to keep our distance and we had to have a mask on. Anytime you stepped out or anyone opened your door, you had to have on a mask. They provided several of them,” she said. “All in all it was not bad.”

Especially since the apartment was equipped with cable TV.

“I don’t have cable TV at home, and my wife doesn’t like to have the TV on, so I binge-watched HGTV,” she said. “I was quite happy with that.”

Cornelius ended up getting out of quarantine at Travis Air Force Base early.

“When my mother-in-law stopped showing symptoms and had basically recovered, even though she wasn’t tested, they released her.”

“Because they were going to be quarantined for 14 days and I wouldn’t have been able to go home otherwise, they released me at the same time,” she explained.

The County of Sacramento has an order on in-house quarantine, she added.

So far Cornelius has not shown any symptoms of coronavirus and her wife tested negative.

“All in all, I don’t know if Princess Cruises could have done more. But they handled the situation from our end very well and have been very kind to us.”

Cornelius said Princess Cruises is refunding all the money the passengers paid and they are giving a 100 percent credit on the face value of the cruise toward a cruise in the future.

“Obviously that’s not going to be any time soon,” she added.

But Cornelius said she will go on cruises in the future. She has gone on a number in the past.

The adventure provided a lot of memories for Cornelius and the others in her group.

One is a touching moment that occurred when the Grand Princess pulled into port at the commercial dock in Oakland. All the dock workers came out and cheered the passengers.

“Everybody came out on their balconies to thank them,” she said. “It was very sweet.”

When Cornelius was released from Travis Air Force Base, she was taken in an ambulance to her home in Sacramento. A U.S. Marshal escorted the ambulance.

“Costly transportation,” Cornelius said. “And within five to 10 minutes of my arrival, a county health official served us our quarantine notice.”

The homecoming in Sacramento, however, had a nice surprise.

“The neighbors who had been cat sitting for us tied a yellow ribbon around our oak tree and a bow at our door,” Cornelius said.

“In addition, we found a loaf of homemade bread and flowers from them inside. Another neighbor dropped off a bottle of wine. Different friends have brought dinners over and another shopped at the farmer’s market for us.”

One thing Cornelius learned about herself through the experience is that she can really be OK in solitude – through reading, walking and reflecting.

But the homecoming in Sacramento offered a more important lesson.

“I realize now is what amazing neighbors and friends we have,” she said. “People have been so sweet and generous. And we are very grateful for our ‘village.’”

Cornelius is a retired architect. After graduating from Denison High School, she attended the University of Iowa and then moved to Lubbock, Texas. She then decided to enroll at Texas Tech and earned a degree in architecture. Her career eventually took her to California. She was in Austin when the economy took a bad turn in 1987, and she followed the jobs to California.