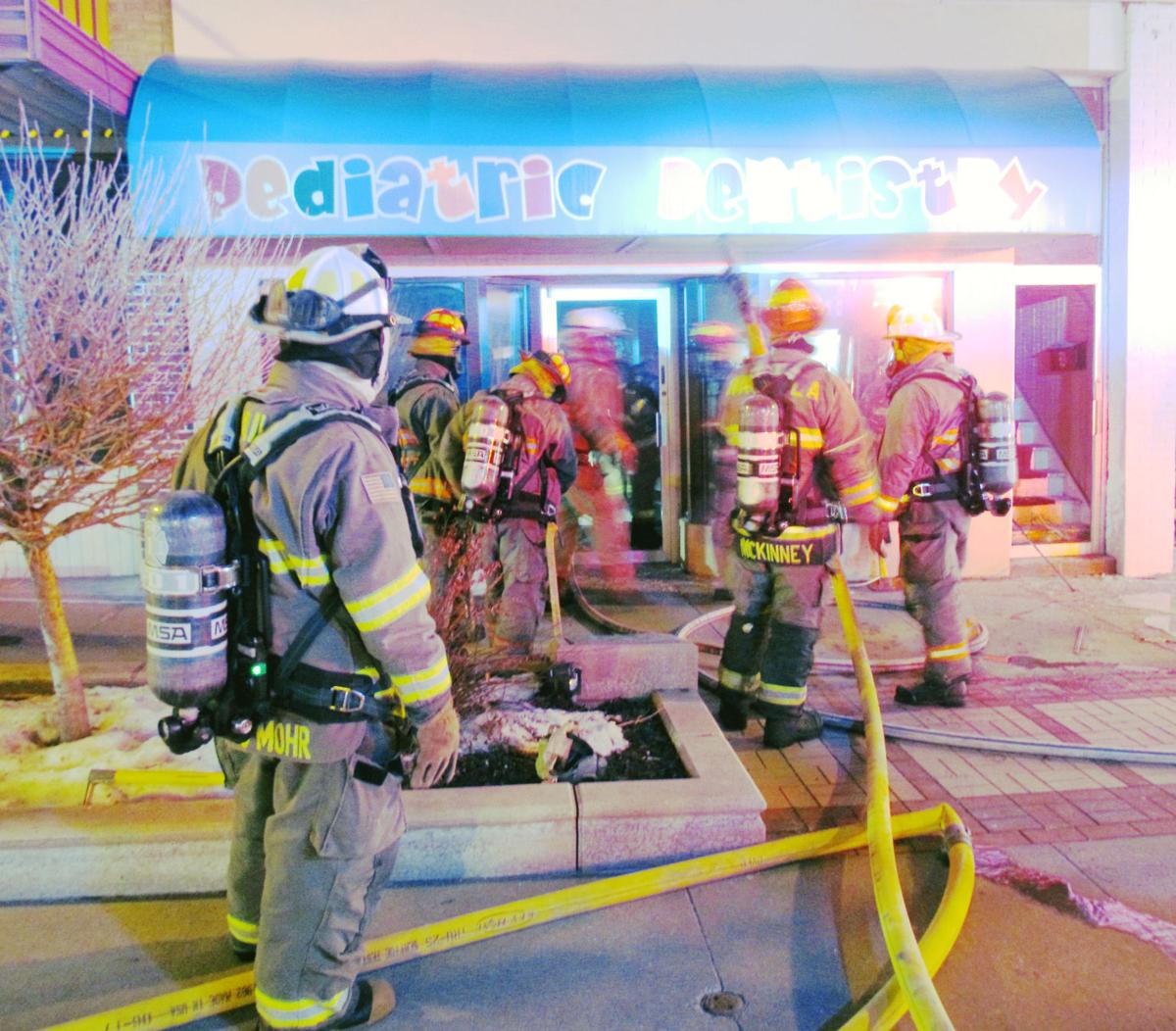 Firefighters begin an entry into Pediatric Dentistry on North Main Street in Denison Tuesday night where a fire broke out in the basement. Photo by DVFD 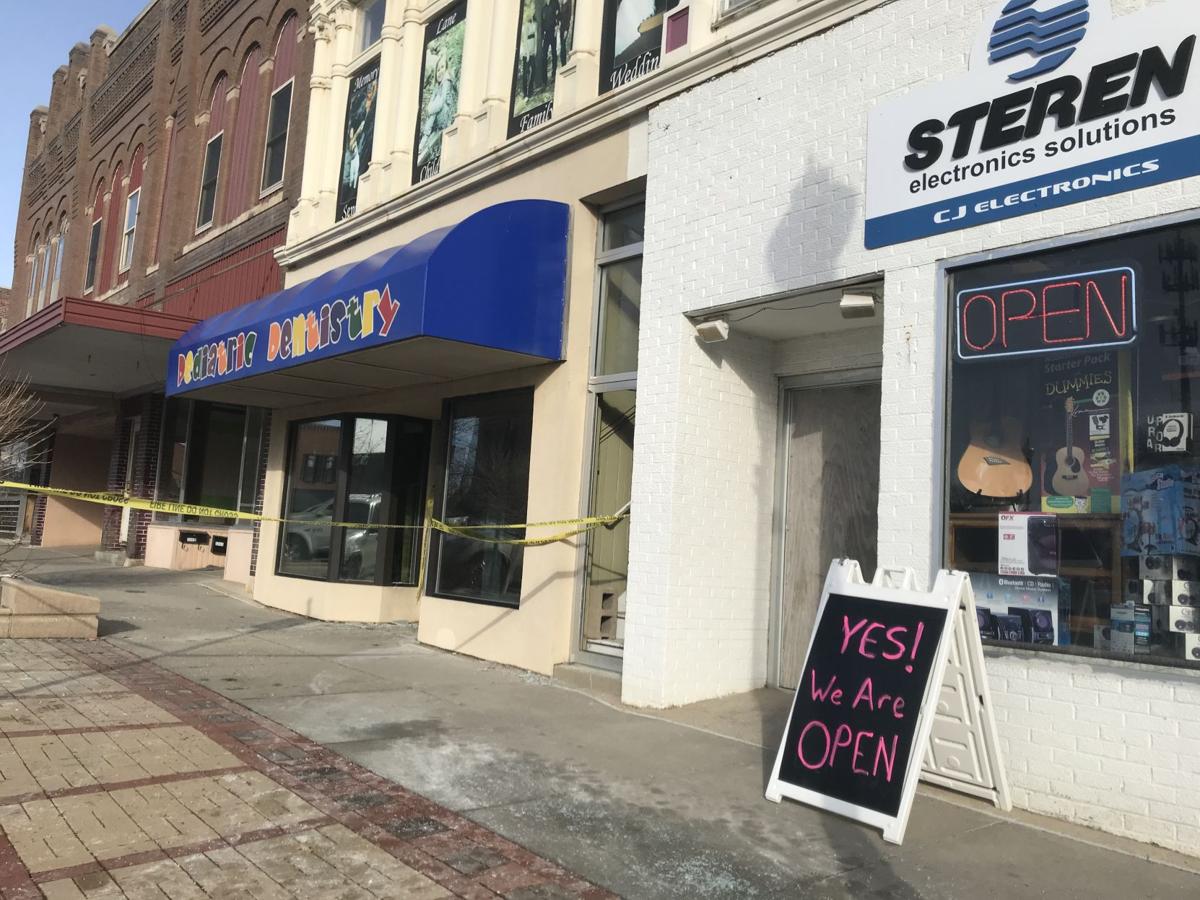 Steren Electronics made sure people knew it was open for business. Photo by Gordon Wolf

Firefighters begin an entry into Pediatric Dentistry on North Main Street in Denison Tuesday night where a fire broke out in the basement. Photo by DVFD

Steren Electronics made sure people knew it was open for business. Photo by Gordon Wolf

A fire Tuesday night in the basement of the Pediatric Dentistry building in uptown Denison damaged that business, temporarily closed the adjacent Steren Electronics business and caused occupants of some second-story apartments to be temporarily displaced.

Firefighters and equipment from the Denison, Dow City-Arion, Manilla and Vail departments were involved containing the fire.

No one was injured.

Steren Electronics was open for business on Wednesday afternoon.

The fire call was made at 9:47 p.m. on Tuesday, and firefighters went first to the basement of North Main Coin Laundry, 34 North Main, where smoke had been reported. No fire was present, and the search for the source of the smoke was extended.

Firefighter crews investigated at the back and fronts of the buildings in that block of North Main and located the fire in the basement at the dentistry building.

Snowgren said crews searching for the fire could see smoke coming from the second floor apartments and hallways but couldn’t determine immediately where the source was. There were no initial telltale signs, he said.

Crews used thermal imaging equipment to look at hot spots on the floor, walls and ceilings.

Once the fire was located in the basement of Pediatric Dentistry, the Denison Volunteer Fire Department used its Bresnan cellar nozzles for the first time. Snowgren said the nozzles had been purchased in 2010 or 2011.

One nozzle fits a 1-1/2 inch hose and the other fits a 2 -1/2 inch hose. The nozzle is lowered through cuts made in the floor. They are designed as rotating distributors to spray water outward, to suppress the fire below, and upward, to protect the floor from which firefighters are operating.

“Generally there is one way in and out way out, and they are hard to get to,” he said. “The way in is where all the heat and smoke are coming. That makes it pretty challenging.”

The cellar nozzles knocked down the fire so firefighters were able to enter the basement with less risk and begin the final extinguishment and overhaul.

Among the challenges posed by fires in a commercial area where stores are adjacent to each other is determining what type of construction firefighters are dealing with.

Going south from the North Main Coin Laundry are a vacant store front, the dentistry building and then Radio Shack. Snowgren said that even though they are different storefronts, it may still be one original building but just divided up.

It’s also the reason that the smoke from a basement two storefronts to the south could travel to the basement of the North Main Coin Laundry building.

“There can be common raceways, conduits, gas lines or water lines,” said Snowgren, “any little opening. What really pushes the smoke is the pressure from the fire.”

Combustion creates an area of high pressure, and pressure always seeks a state of equilibrium.

Keeping fire from spreading a priority for firefighters

Denison Fire Chief Cory Snowgren said that cellar fires create another unique risk for firefighters in that the fire can jump from cellar to cellar. He said it takes a lot of communication and teamwork to fight a basement fire in an uptown district and that crews have to know where other crews are operating.

The risk of the fire spreading from business to business was a concern for firefighters on Tuesday night.

“I wasn’t the only one who had ‘Laub Block’ going through my mind,” said Snowgren.

He is referring to the Henry C. Laub building, which had been located on the northeast corner of the Main Street and Broadway intersection, several storefronts south of where Pediatric Dentistry is located today.

In March 1932, that building, which covered about a quarter of a block, was destroyed by fire.

“At the fire station, down in the meeting room, we have pictures and newspaper articles of the Laub Block fire,” said Snowgren. “We’re all very aware of our history, and that’s where we hope that type of history stays - in history.”

It is not the first time that many of the current firefighters have been reminded of the Laub Block fire.

- On Wednesday morning, July 10, 2010, firefighters were able to confine a fire to a single building, Family Fitness, at 1225 Broadway. That building is located west from the southwest corner of the Broadway and Main intersection. Nine area fire departments were called in for mutual aid.

Firefighters had to battle the heat of the fire inside and a 110-degree heat index outside. Four firefighters went to the hospital for treatment of heat exhaustion and were released a short time later. The cause of the fire was determined to be electrical. Snowgren had just been hired as Denison’s fire chief at that time; he served in a support capacity at that fire since he had just arrived in town.

- On the evening of Monday, June 4, 2007, an unattended charcoal grill sitting on the roof outside an apartment in the upper level of the Radio Shack building ignited the roof material and the fire extended about 20 feet into the apartment. The Radio Shack business received smoke and water damage.