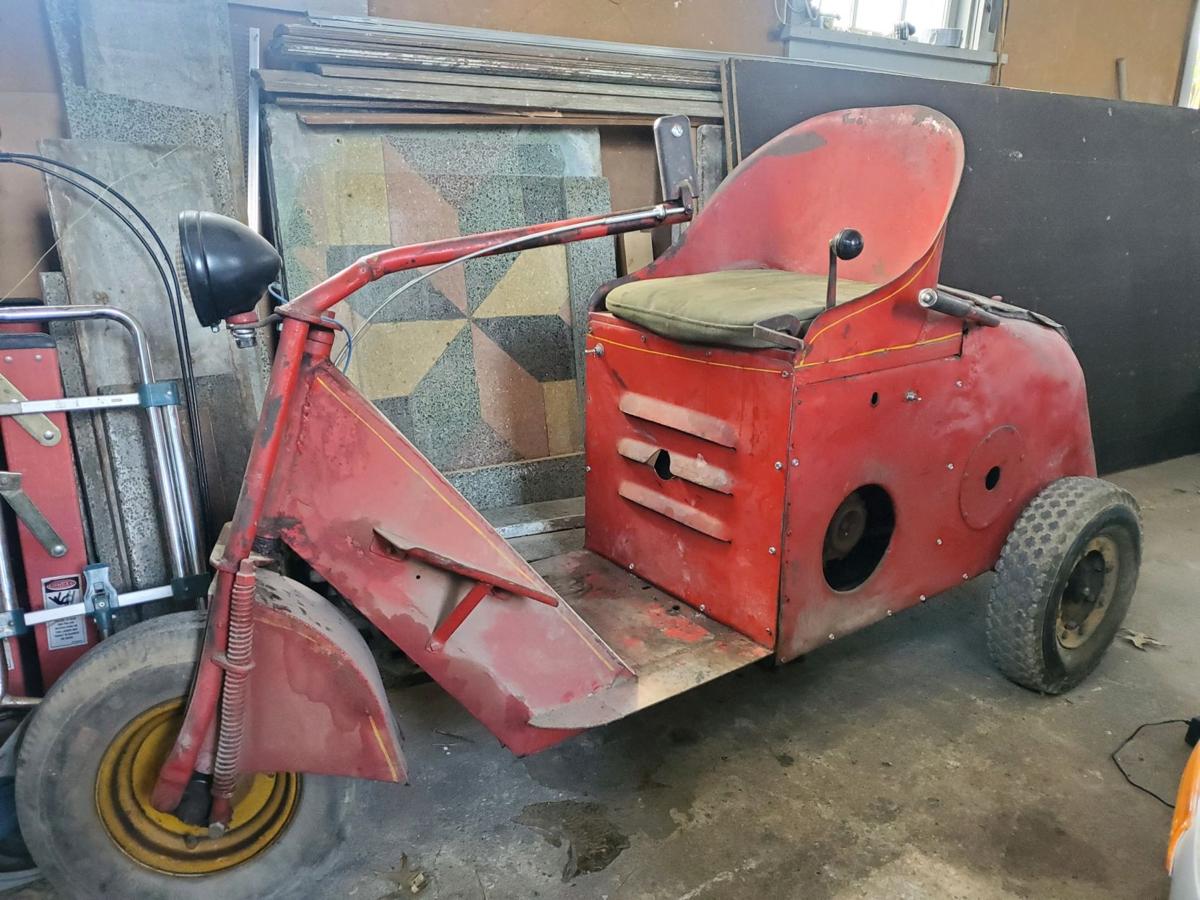 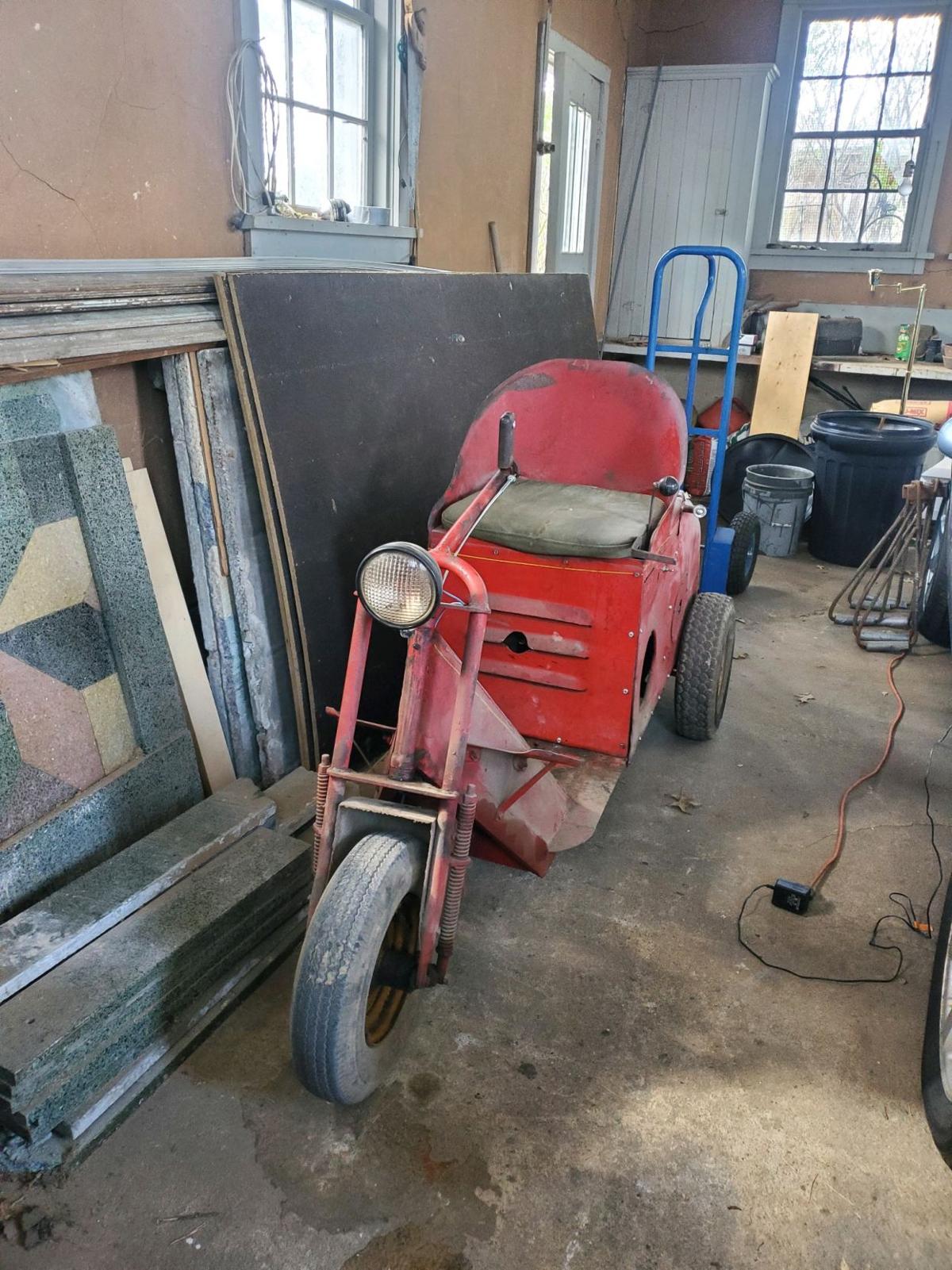 “I grew up behind Hy-Vee,” said Denison resident Nathan Mahrt. “Lee Bliesman used to walk by all the time. Every once in a while he would stop by to see what I was working on.”

One day, in the mid-1980s, Bliesman stopped in while Mahrt was working on a motorcycle. The conversation turned to a scooter that Harold Fink had built in 1946 for Bliesman’s uncle Frank Larsen.

Larsen was the Crawford County Recorder for 38 years; he contracted polio at age six and was paralyzed from the waist down.

“Larsen came to my dad and asked him if he could build something to accommodate his needs,” said Harold Fink’s son, Kevin.

The result was a scooter that was essentially a powered wheelchair.

Bliesman still had the scooter in the 1980s; he told Mahrt he should take a look at it sometime.

“I never did, but I didn’t forget about it,” Mahrt said.

The scooter ended up in the old Denison Bulletin Building on 1st Avenue North, which Lee and Lois Bliesman owned.

After Lee died, Luis Navar, of Denison, bought the building.

“Luis called me to look at some of the stuff in the basement that might be interesting for Denison history,” Mahrt said. “I saw it and I immediately knew what it was.”

Navar was taking items out of the basement for recycling; he told Mahrt he could have the cart if he wanted it.

Fink recognized his creation right away.

“I asked if he thought he could get it running again and he said, ‘Sure,’ and then he started working on it,” Mahrt said.

“He was a mechanical genius. He could make anything,” said Kevin Fink. “If you asked him how to do something and let him think about it overnight, he’d have an answer in the morning - or maybe that same day.”

“I told Harold once I needed a machine that would dig my basement out and he came up with a thing that did that,” Mahrt said. “It was a tracked vehicle that would go in, fill up a wagon and then it would come out and dump it into the truck.”

Harold refurbished everything on the scooter, which was based on a Cushman scooter that he had ridden at one time, Kevin said.

“He took parts from wherever to make it,” Mahrt said. “It’s like an amalgamation of a bunch of parts put together to make a handicap cart that a person could drive safely uptown.”

The January 23, 1951, Denison Review noted that “Larsen is a familiar figure on Denison streets as he pilots a motor-driven scooter to and from work.”

Some of the parts were missing, but Harold was able to get the scooter running again.

“He really enjoyed working on it,” Mahrt said. “He said it brought him back to when he was 22 again.”

“He took the gearboxes apart and got everything working back to its normal capacity and he actually drove it,” Kevin said.

Larsen did not have the use of his legs, so all the controls were designed to be run by his hands.

The scooter is powered by an eight horsepower 1946 Briggs & Stratton engine.

“It will go up any incline,” Mahrt said. “I drove it up 1st Avenue North - that steep incline by Hy-Vee – it goes right up that, no problem.”

Larsen had to register the scooter as a motorcycle to use it; the last time it was registered was 1961.

“It’s got a gearbox on it that’s bulletproof,” he said. “You could, literally, very slowly make your way to California and it would make it.”

The most remarkable aspect of the scooter was its ability to be used indoor and outdoor.

“It has a generator starter on it, so when he (Larsen) would come up to a store he’d turn the gas motor off,” Mahrt said. “He had a button and a lever and instead of starting the thing and engaging the starter on the motor, it would run the vehicle. So he could go in a store and it would be electric.

“Think about 1946: you have a guy in Deloit, Iowa, making a handicap cart, like a Hoveround or a Little Rascal, but his was gas powered and it was also electric,” Mahrt said. “That’s crazy. They didn’t have anything like that.”

Mahrt said he doesn’t know of anything like it today, either.

Harold built another scooter for Larsen to use; the second one had four forward gears, as opposed to the single gear of the original scooter.

“He told me that Frank Larsen had that one, too, but it went too fast for him,” Mahrt said. He doesn’t know what happened to the second scooter.

Harold Fink died in 2017, not long after he restored the original scooter to working order.

“It got parked and it sat for about three years and things got gummed up so I decided to take it apart,” Kevin Fink said.

Kevin and his son, Travis, cleaned the carburetors and gas tank and got it running again this spring.

Travis, who was close to his grandfather Harold, rode the scooter to Mahrt’s house two weeks ago.

Mahrt said he doesn’t have any plans for the scooter.

“It was just one of those things that was too cool to see go to recycling,” he said.