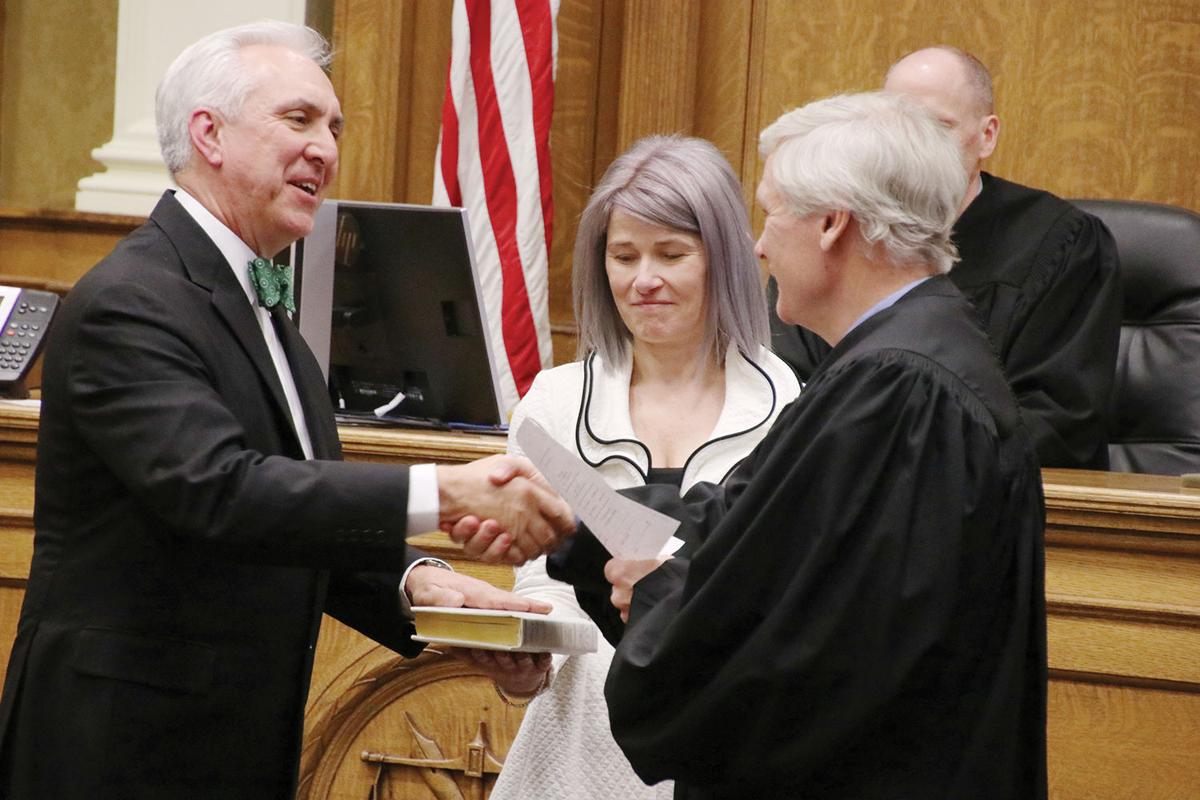 Roger Sailer (left) is congratulated by the Hon. John D. Ackerman after receiving the oath as district court judge during an investiture ceremony Friday afternoon in the Crawford County Courtroom. Sailer, of Schleswig, had served as the Crawford County Attorney. In the middle is Sailer’s wife, Maura. Behind, seated at the bench is the Hon. Steven J. Andreason, who presided at the ceremony. VFW Post 3930 and American Legion Post 645, of Schleswig, presented the colors. Rep. Steve Holt led the Pledge of Allegiance and Fr. Randy Schon with St. Rose of Lima Catholic Church gave the invocation and benediction. Photo by Gordon Wolf 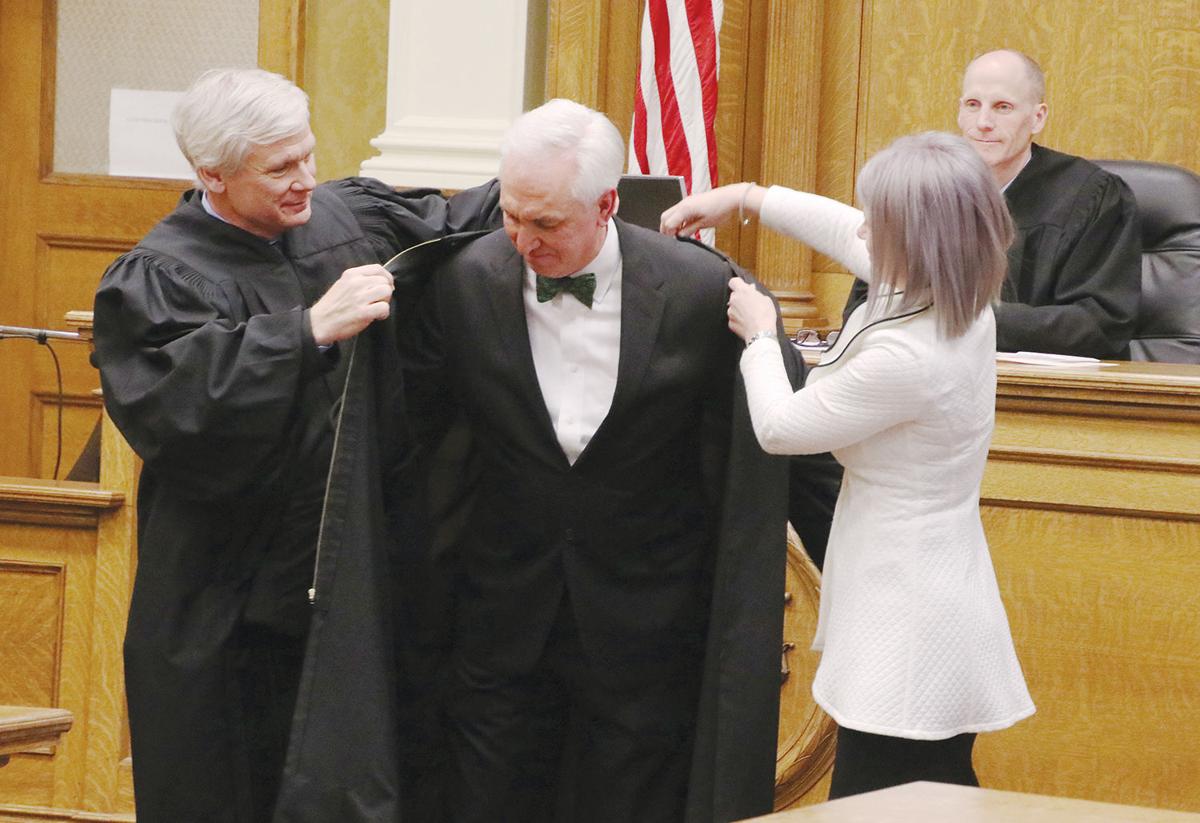 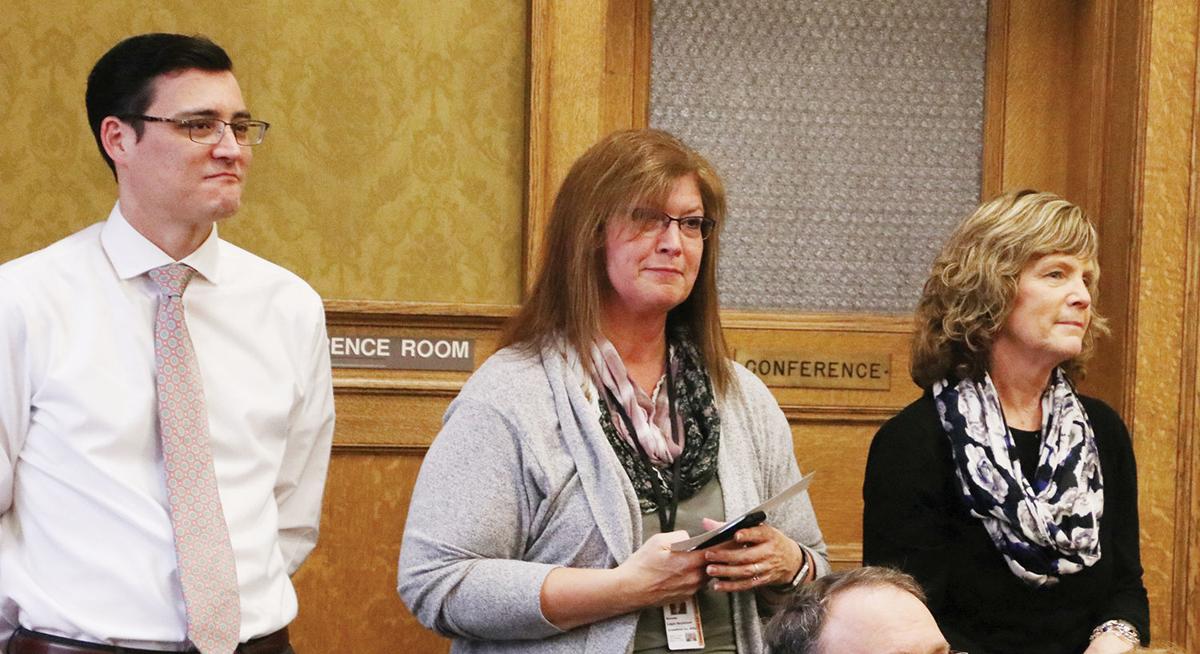 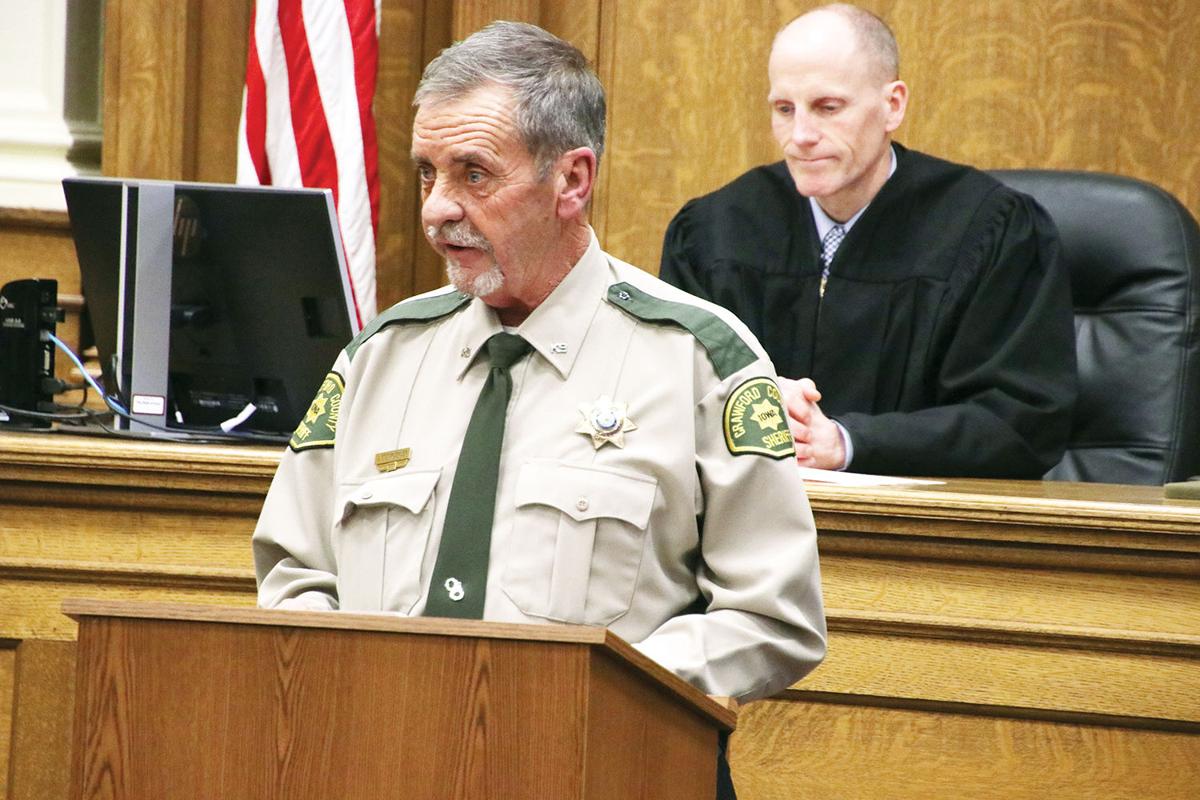 Roger Sailer (left) is congratulated by the Hon. John D. Ackerman after receiving the oath as district court judge during an investiture ceremony Friday afternoon in the Crawford County Courtroom. Sailer, of Schleswig, had served as the Crawford County Attorney. In the middle is Sailer’s wife, Maura. Behind, seated at the bench is the Hon. Steven J. Andreason, who presided at the ceremony. VFW Post 3930 and American Legion Post 645, of Schleswig, presented the colors. Rep. Steve Holt led the Pledge of Allegiance and Fr. Randy Schon with St. Rose of Lima Catholic Church gave the invocation and benediction. Photo by Gordon Wolf

People usually think of a courtroom as a solemn place, and it usually is.

But during a ceremonial session on Friday afternoon, seriousness was mixed with levity in the Crawford County Courtroom for the investiture of Roger Sailer as a district court judge in Judicial District 3B.

Sailer had served as county attorney for Crawford County from July 2013 to his investiture.

His appointment filled the district court judgeship vacated by Julie Schumacher, who had been appointed to the Iowa Court of Appeals on August 29 last year.

Both Schumacher and Sailer are from Schleswig, and they had been colleagues in private practice with Mundt, Franck and Schumacher in Denison and then when both served as assistant county attorneys under Michael Mundt.

“If I have such a thing as a father figure in my legal career, it has to be Michael Mundt,” said Sailer. “He not only gave me my first job as a lawyer but he immediately took a keen interest in me as a lawyer, as a person and as a growing individual. He has been nothing in the world but helping and encouraging from the minute I met him.”

Sailer introduced his wife, Maura, and said her family had become his family.

Sailer recognized the family members as well as friends who traveled to the investiture from Boston, Massachusetts and from Lincoln, Nebraska

Maura Sailer gave an example of her husband’s respect for the judiciary, telling a story about the last case he tried in front of a jury, on May 13 last year. She said her husband worked hard on the case, as had the witnesses. A jury of 12 individuals returned guilty verdicts, although the convictions were tempered by the fact that a man with young children was facing a prison sentence.

“He says sending someone to prison is never anything to celebrate,” Maura commented.

Later, upon a proper motion by the defendant, the presiding judge set aside the jury verdict.

“Roger was amazed and humbled at the awesome power of the court,” Maura said. “He and his witnesses had firmly believed in the guilt of the defendant and in a court of law he had successfully convinced a 12-person jury of the same, and yet the wheels of justice took another turn.”

When the court set aside the jury verdict, her husband did not agree with that conclusion but he understood and respected the decision of the court, Maura added.

“This case reflects Roger’s shatterproof respect for an independent, fair and impartial judiciary,” she said. “As a district court judge I have full confidence the public trust and the delivery of justice is in good hands.”

The Hon. Jeffrey A. Neary provided much of the levity by reading comments from Sailer’s colleagues in the Crawford County Bar Association and by presenting a picture of Sailer wearing an Iowa Hawkeyes pullover.

Sailer is a diehard Nebraska Cornhuskers fan, and he was obligated to wear the pullover after losing a bet over the Iowa/Nebraska game on November 29. The Hawkeyes won 27-24.

Neary said he was very pleased when he heard that Sailer was applying to be a judge.

“My work with Roger, as a district court judge, has led me to believe he is now in the place he needs to be in,” he said.

The eighth comment was both tongue in cheek and serious: “His three-piece suits are pretentious. His sweater vests are atrocious. His taste in football teams is questionable. And he’s one of the most honest and trustworthy attorneys I’ve ever had the pleasure to work with.”

Neary recited quotes from two justices, one from Harvey Uhlenhopp, a former Iowa Supreme Court justice, and the other from William Rehnquist, a former chief justice of the U.S. Supreme Court.

Rehquist’s quote is, “The right to one’s day in court is meaningless if the judge who hears the case lacks the talent, experience and temperament that will enable him to protect imperiled rights and to render a fair decision.”

Neary said, “I think that really says it all, and I have great confidence that Roger has what it takes to do all those things and in fact has those as we stand here today, but will only flourish in this opportunity.”

Continuing in the solemnness of the investiture ceremony, Neary gave the 10 commandments about being a judge and said that Sailer fits those commandments.

“That’s important to keep us alive and living long,” he said.

Neary left the courtroom temporarily during his presentation and returned dressed as Carnac the Magnificent, a character Johnny Carson played on the Tonight Show. Carnac was a seer from the east who could divine the answers to questions placed in sealed envelopes.

The judge gave the answers to questions in five sealed envelopes. The last answer was “Court reporter, the clerk and court administration.”

The question was, “Who’s in charge of your courtroom, your court file and your life.”

Crawford County Sheriff James Steinkuehler commented on the years he worked with Sailer.

“Farewell to one great colleague. Roger, your hard work and dedication were an important part of our teamwork here in Crawford County. As you turn the page in your life story, we join together in wishing you every success in the future as a district court judge.”

He added that he knows the hard work Sailer put in and said that they both have seen and dealt with some “pretty horrific cases here in Crawford County.”

“I can’t think of another individual who worked so hard on getting convictions on cases and giving closure to the loved ones left behind. It has been a great pleasure working with you, Roger, and now you’re off to your next big challenge. Good luck and God’s blessings to you and your family,” the sheriff said.

After taking the oath and slipping on his judge’s robe, Sailer turned to the audience and said that throughout the long process of becoming a judge, his general feeling has been one of excitement.

“I don’t mind telling you now as I stand here and understand what’s happening, it is exciting but the prevailing feeling is very humbling, and I’m very struck by the seriousness of what this all means and what’s ahead,” he continued.

He thanked those on the judicial nominating commission for choosing him as a finalist and thanked Gov. Kim Reynolds for appointing him.

He said that throughout the application process he was asked the attributes of judges he knows that he hopes to emulate.

“I could not have asked for a better group of people to draw those attributes from. It’s an outstanding panel of judges we have in this district and I sang their praises,” Sailer said.

“I could go on down the line,” Sailer said, pointing to the judges seated in the jury box. “All of them are terrific examples.”

He was also often asked about his philosophy of what a judge should be like.

For that answer, he turned to a sign that he and Maura have at the back door at their home, something they look at every day as they leave for work.

Sailer encouraged those who are in the market for a philosophy to adopt it.

“This is how I’ve certainly attempted to live my personal and professional life,” he said, not yet showing the sign to the audience.

He turned the sign around to show that is says, “Work hard and be nice.”

Sailer is a May 2007 graduate of Creighton School of Law. He was an associate with the Mundt, Franck & Schumacher Law Firm in Denison from September 2007 through July 2013 and served as an assistant county attorney from May 2008 through July 2013.

Prior to attending law school, Sailer served in the U.S. Army and worked in the broadcast media industry.

In his application to be considered for a judgeship, Sailer wrote that during his service in the U.S. Army Military Intelligence Corps, he worked in a sensitive position for the National Security Agency for which he had to undergo an exhaustive investigation into his background, family, work history, affiliations, friendships and financial affairs. He was granted a Top-Secret-SCI security clearance, the highest level attainable.