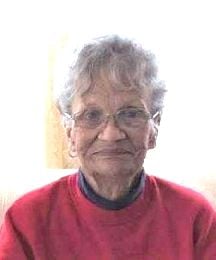 Henrietta (Henri) Beckenhauer November 6, 1933 - July 22, 2019 Henrietta Joan, daughter of Henry and Margaret (Lindstrom) Hollander, was born November 6, 1933 at Walkertown, Iowa. She attended school in Manilla and then married Paul Lehrkamp. The family lived in Carroll and three sons and one daughter were born to this union. Henri was united in marriage with Howard Beckenhauer then moved to California where a daughter was added to the family. She worked at GM making Firebirds, Trans-Am, and her favorite, the Camaro. In 1983 she moved to Iowa, where she has resided since. She managed Tobe's Place in Defiance for many years. She enjoyed and took pride in helping raise her two youngest granddaughters. Henri loved bowling, playing solitaire, and watching the Iowa Hawkeyes, Dancing with the Stars and Mollie B's Polka Party. In her spare time she enjoyed crocheting, sewing and playing with Cuddles (dog given by Tonya). Through the years Henri suffered from heart illnesses. Her death, however, was sudden and unexpected. She died at home on Monday, July 22, 2019, at the age of 85 years, 8 months and 16 days. Henri was preceded in death by her parents; sister Betty Pedersen (Clarence); brothers Kenny and Bob Hollander; son Gary Lehrkamp; and daughter Becky McHenry. She is survived by her significant other Chrissy Christensen, Manilla; children: Bob Lehrkamp (Lydia), Des Moines; Lonny Lehrkamp (Cindy), Carroll; Tonya Heiman, Ralston, NE; son-in-law Bryant McHenry, Tulsa, OK; 12 grandchildren; 12 great grandchildren; sister Pam Prusa (Gary), Manilla; other relatives and friends. www.ohdefuneralhome.com Funeral Service Saturday, July 27, 2019, 10:30 am. Trinity Lutheran Church Manilla, Iowa. Officiating Reverend Andrew Johnson. Music: In The Garden by Elvis Presley, How Great Thou Art by Elvis Presley, Amazing Grace by Elvis Presley, Hallelujah by Susan Boyle, My Heart Will Go On by Heavenly Sisters. Honorary Urn Bearers, Henri's Grandchildren Angie, Josh, Shawn, Gary, Jeff, Tiffanie, Sonya, Travis, Kenzie, Logan, Taylor, & Caylin.

To plant a tree in memory of Henri Beckenhauer as a living tribute, please visit Tribute Store.