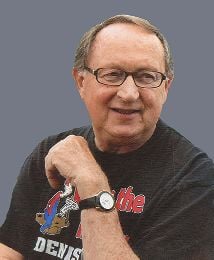 Bruce Binning October 28, 1941 - June 18, 2019 Celebration of Life for 77 year old Bruce Binning of Denison, Iowa, will be held 3-4 PM, Thursday, July 11, at the Stables of Copper Ridge in Denison, followed by a luncheon and social gathering till 6 P.M. The Huebner Funeral Home in Denison is in charge of arrangements. Bruce Arnold Binning was born in Oelwein, Iowa, to Donald and Emma Binning on October 28, 1941.He passed away at home on June 18, 2019, in the loving embrace of his family. Bruce spent his early years in Oelwein, Denison and the Quad City area. After attending his freshman year at Denison High School, he moved with his family to Muscatine, where he graduated with the class1959;there, he met his childhood sweetheart and love of his life, Joyce(Hartsock). He and Joyce were married in 1962 in Davenport, Iowa and made their first home in Iowa Falls, where first child, Angie was born. Sons Kelly and Chip would following the next 10 years to complete the family. While living in Iowa Falls, Bruce crossed paths with a family friend from Oelwien, Dick Knowles, former publisher of the Denison Bulletin and Review. In 1965, Mr. Knowles offered Bruce a job as a photographer at the Bulletin; a position he held and cherished for 52 years. A visionary in the news photography industry, Bruce was an award winning photographer for many decades and received the Iowa Newspaper Association's Distinguished Service Award in 2016. Simply known as "the camera man", multiple generations have grown up seeing the iconic "Photo by Bruce A. Binning"under most photos in the Denison Newspaper. It gave him great joy to capture the beauty and daily life of Crawford County residents, and he felt privileged to do so. There was no greater family man than Bruce. In an era where dads weren't always hands on in parenting, Bruce couldn't wait to get home from work to spend time with Angie, Kelly and Chip. Most evenings were spent at the park, playing games or attending their school events. A big kid at heart, he was also a favorite with neighborhood children, and was a role model, mentor and father figure to many who weren't even his own. He continued this supportive role with his grandchildren, proudly attending every band concert and athletic event. Bruce was a lover of life and appreciated simple pleasures. Roaming the back roads of the Loess Hills, a good western on TV, a beautiful sunset, shucking fresh sweet corn on a summer's evening or a full moon on the horizon was enough for him. A testament to his youthful spirit, Bruce has an extensive Pez Dispenser collection, Looney Tunes memorabilia and Mickey Mouse watches. Most recently, he developed a fondness for small scale cannons and loved blowing up tomatoes and apples in the fall, much to the delight of his grandchildren. His quick wit, political incorrectness and endless humor made him a source of laughter and entertainment for those privileged to know him. Left to celebrate and remember Bruce is his beloved wife of 57 years, Joyce; daughter Angie and husband Alan; son, Kelly and wife Oksana; son Chip and fiance' Michelle; a sister, Linda and her husband, Doug; grandchildren Mitch, Caitlin, Ethan, Courtenay, Bryce, Beau, Drew and Cayson; 8 great grandchildren; nieces, nephews and many special first cousins. He was preceded in death by his parents Don and Emma, and brothers Dennis and Donnie.

To plant a tree in memory of Bruce Binning as a living tribute, please visit Tribute Store.