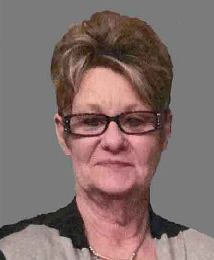 Brenda Kay Blum October 24, 1958 - May 11, 2020 Brenda Kay Blum was born October 24, 1958, in Denison, Iowa, the daughter of Harold and Ellen Henningsen. She passed away at her home in Denison, Iowa, on May 11, 2020, at the age of sixty-one. Brenda was baptized into Christ November 16, 1958, at Zion Lutheran Church in Denison, Iowa, and later confirmed her faith. She received her education in the Deloit and Denison Community Schools and graduated from Denison High School with the Class of 1977. Brenda was united in marriage to Kevin Kuehnhold in September of 1977 and they were blessed with two sons, Jason and Jesse. She was later united in marriage to Tom Blum on July 9, 1994, and they were blessed with one daughter, Paige. A hard worker, Brenda began her employment career in high school by working at Pucci's Pizza and at Cronks. She was also employed at Kehl Drug, Hardee's, Kum & Go, and most recently at Breadeaux Pizza. Brenda enjoyed cooking and was considered the "food artist". Her other interests included: watching football games, watching her nephew Dale race and watching her grandchildren in their school events. She loved music, country and rock, new and old, dancing, riding motorcycles, plants, and taking pictures. Television favorites were Lifetime movies and local channels. Brenda was always concerned about her appearance and always had to be presentable. She was a social butterfly and enjoyed socializing with friends and family over food and beverages. Brenda was preceded in death by her parents, Harold and Ellen, and one sister, Betty. Survivors include: two sons, Jason and his wife, Dawn, and Jesse and his wife, Jennifer; one daughter, Paige and special friend, Chris; six grandchildren: Easton, Ace, Waylon, Gage, Hannah, and Ava; two brothers, Howard and his wife, Linda, and John and his wife, Kim; one sister, Beverly and her husband, Steve; one brother-in-law, Bill; nieces, nephews, other relatives and friends. Private Family Services were held 2:00 P.M., Monday, May 18, 2020, at Huebner Funeral Home in Denison, Iowa. Rev. Chad Trunkhill officiated the service with interment in Crawford Heights Memory Gardens in Denison. Music selections included recordings of "On Eagles' Wings" by Josh Groban and "How Great Thou Art" by Henry Henningsen. Bagpiper, Joanie Buller played "Amazing Grace" at the cemetery. Serving as honorary pallbearers were Brenda's grandchildren: Hannah Kuehnhold, Waylon Kuehnhold, Easton Kuehnhold, Gage Kuehnhold, Ace Kuehnhold and Ava Kuehnhold. Serving as pallbearers were Jerrod Henningsen, Jason "Johan" Sander, Jeremy Michaelis, Chris Abelson, Nick Jedlicka and Mike Ransom. The Huebner Funeral Home in Denison was in charge of arrangements.

To plant a tree in memory of Brenda Blum as a living tribute, please visit Tribute Store.