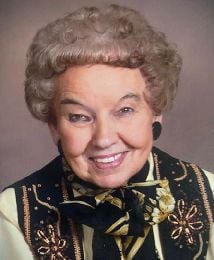 Mary Jane Brasel December 11, 1928 - March 20, 2020 Mary Jane Brasel, the daughter of Jay William Ahart and Marian Elizabeth McCabe, was born on December 11, 1928 in Dow City, Iowa, and passed away peacefully in her sleep on Friday, March 20, 2020 at the age of 91 years at Highline Place in Littleton, Colorado. Mary Jane grew up on a farm in Dow City and attended the Dow City School, graduating from high school with the class of 1946. After graduation, Mary Jane worked at her father's International Harvester Dealership and later married Leonard "Russell" Brasel on March 2, 1954. Mary and Russell Brasel of Dow City were united in marriage at St. Mary Catholic Church in Dow City, this union was blessed with one son and one daughter. They farmed and raised "greyhound" racing dogs which gave the Dow City school its mascot name. While Russell became postmaster of the Dow City Post Office, Mary Jane took an active roll in raising her family. Later she worked in Denison at Broadway Fashions and later became a Real Estate Agent with the McCord Insurance Real Estate Company. Mary Jane loved meeting and working with people in the community. After the death of Russell, the Brasel Family bought the Dow City Hardware building where they completely remodeled the building and made it a Memorial Building in the memory of Russell Brasel to be enjoyed by the community. Mary Jane took such pride in the building and loved scheduling and getting ready for events. Whether it be a funeral, wedding, or graduation, she was always there to help, and after the event she would clean the facility spending hours to make it shine for the next group. Mary Jane loved living on the farm where she raised cattle. Despite being a hard worker, Mary Jane was incredibly social enjoying getting together with her dear friends where they played cards, dominos and went out to eat. They enjoyed many road trips to Branson, Colorado, Omaha and neighboring towns. She was an active member of the United Methodist Church. One of her greatest joys was spending time with her three grandsons. Mary Jane spent the last couple years at Cherry Hills Assisted Living in Centennial, Colorado, where she enjoyed making new friends and seeing family on a regular basis. Mary Jane is preceded in death by her husband, Leonard "Russell" Brasel; parents, Jay William and Marian Elizabeth Ahart; two sisters: Mable Jean and Kathleen; three brothers: John Louis, Richard Jay, and William Lee. She is survived by her two children: Susan Anne and Timothy Jay of Greenwood Village, Colorado; daughter-in-law, Janet Michele of Greenwood Village, Colorado; three grandchildren: Tyler Jay and Justin Thomas of Greenwood Village, Colorado and Colton Russell of Campbell, California; sister, Bonnie Glotfelty of Ames, Iowa; brother, Edward Ahart of Anaheim, California; and many relatives and friends. Funeral Services will be held at a later date. The Huebner Funeral Home in Denison is in charge of arrangements.

To plant a tree in memory of Mary Brasel as a living tribute, please visit Tribute Store.