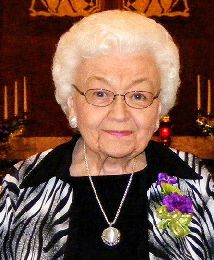 Dorothy Ann Marie Dettbarn February 12, 1926 - January 3, 2020 Dorothy Ann Marie Dettbarn, 93, passed away Friday, January 3, 2020, at Eventide Lutheran Home in Denison, Iowa. Dorothy, the daughter of Alfred and Anna (Hansen) Ewoldt, was born on February 12, 1926, in a farmhouse south of Vail, Iowa. She was raised, and was proud to have lived her whole life, in Crawford County. She attended several country schools and graduated from Vail High School in 1943. On June 6, 1945, Dorothy and Myron Dettbarn were married in Mapleton, Iowa, by Rev. E.G. Otte, minister of the United Church of Christ. Together they farmed and raised their family on the Dettbarn family farm northwest of Westside, Iowa, before moving to Westside in 1984. She was a loving and caring wife, mother, grandmother and great-grandmother. She enjoyed her vegetable and flower gardens, baking and sewing. Her homemade pies and embroidered and quilted gifts were family favorites. Dorothy was an active member of the United Church of Christ and later the United Church of Westside. She served on many church committees and was a member of the United Church Women. She served as officers on the Pruter Plaza Board and the Westside Cemetery Association. For many years, she enjoyed bowling on several leagues, quilting with the Busy Thimbles, playing in card clubs and attending Cubs baseball games, dances and trips with Myron and their friends. She enjoyed attending and supporting school music and sporting events, especially those of her children and grandchildren. Dorothy is survived by her children: Linda (Steve) Nicolaisen of Correctionville, Lila (Kenny) Crawford of Vail, Larry (Mary) Dettbarn of Carroll, and Leesa (Rich) Stoffers of Coon Rapids; eight grandchildren: Tracy (Joel) Lohry, Aaron Nicolaisen, Keith (Missy) Crawford, April (Christopher) Thelen, Jessie (Curt) Riesberg, Jill Dettbarn (Lonnie Stewart), Mitchell (Morgan) Dettbarn and Jake Stoffers; twelve great-grandchildren; and one nephew, Donald (Toni) Ewoldt, Jr. of Ripon, California. She was preceded in death by her husband Myron in 2009, grandson Jason Nicolaisen, brother Donald Ewoldt, Sr. and nephew John Ewoldt. Funeral Services were held 10:30 A.M., Tuesday, January 7, 2020, at United Church in Westside, Iowa. Rev. Robert Cook officiated the service with interment in the Westside Cemetery in Westside. Organist Janine Kock provided accompaniment for congregational hymns "Precious Lord, Take My Hand," "Where He Leads Me I Will Follow" and "Hymn of Promise." Serving as pallbearers were Aaron Nicolaisen, Mitchell Dettbarn, Keith Crawford, Jessie Riesberg, April Thelen, Jill Dettbarn, Jake Stoffers and Tracy Lohry. The family invited everyone to return to the church for fellowship and lunch provided by the United Church Women and catered by Staley's. The Huebner Funeral Home in Westside was in charge of arrangements.

To send flowers to the family of Dorothy Dettbarn, please visit Tribute Store.