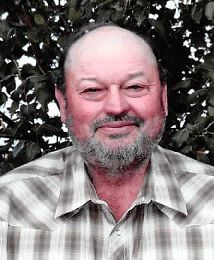 Charles Vern Erlbacher February 21, 1951 - January 6, 2020 Charles Vern Erlbacher, son of Leonard and Magdalen (Freund) Erlbacher, was born February 21, 1951 in Harlan, Iowa. He attended grade school at St. Joseph's in Earling until his Junior year of high school then graduated from Dow City-Arion High School with the class of 1969. He then enlisted into the United States National Guard Reserve. On June 6, 1987, Charlie was united in marriage to Doris Rohe at St. Joseph's Catholic Church in Earling, Iowa. Together they raised five children: Carla, Kristy, Douglas, Bonnie, and Scott. He farmed his whole life, also working various other jobs including trucking, seed sales, grain merchandising, and custom farming. Charles and his brothers took over their dad's farm when he retired. He loved being on the farm and raising his cattle and hogs for over 40 years. In addition to traditional row crops, Charles grew popcorn. He was so proud of his work. Charles enjoyed going to tractor pulls, raising crops, cattle and hogs, and playing Euchre with anyone who would play. He also enjoyed TV shows like Walker Texas Ranger, Chicago PD, Wheel of Fortune, and pretty much any western movie. His favorite joy of all was his family. He was a proud papa to his granddaughter, Fiona, and a very proud father to his kids. Charles enjoyed taking his son Scott to his various events, and being his personal coach for the Special Olympics. He enjoyed trips to the farm to check up on Doug to make sure he was doing what he was supposed to be doing. Of course he was glad to do it because it combined his two favorite loves; farm and family. Even with his declining mobility, he kept working on the farm. During the last harvest, Doug got Charles in the combine so he could make rounds bringing the crops in and he smiled so wide you could see his teeth from the road. Charles passed away on Monday, January 6, 2020 at Crawford County Memorial Hospital in Denison, Iowa, attaining the age of sixty-eight years, ten months and sixteen days. In addition to his parents, he was proceeded in death by his siblings Gerald Erlbacher and Phyllis Roberts. He is survived by his wife Doris Erlbacher of Dow City, Iowa; children Carla Erlbacher of Council Bluffs, Iowa; Kristy Eller of Smithville, Missouri; Douglas (Katie) Erlbacher of Dow City; Bonnie Erlbacher of Austin, Texas; Scott Erlbacher of Harlan, Iowa; one granddaughter, Fiona; sisters Elaine (James) Barrett of Omaha, Nebraska; Marie Kenkel of Earling, Iowa; Jan (Jack) Duffy-Gilsdorf of Omaha, Nebraska; brothers Allan "Tim" (Jane) Erlbacher of Defiance, Iowa; Dean (Dana) Erlbacher of Defiance; nieces and nephews; other family members and many friends. A 10:30 AM Mass of Christian Burial was celebrated by Rev. Dan Gehler on Saturday, January 11, 2020 at St. Joseph's Catholic Church in Earling, Iowa. Mark Ewoldt, Justin Watje, Steve Wieland, Terry Erlbacher, Joe Erlbacher, Kenny Rohe, Keith Rohe, and Randy Heese served as casket bearers. Interment was held at St. Joseph's Cemetery in Earling, Iowa. Pauley Jones Funeral Home was in charge of arrangements.

To plant a tree in memory of Charles Erlbacher as a living tribute, please visit Tribute Store.