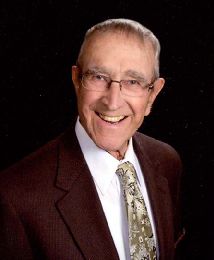 Reynold Louis Gehlsen February 13, 1928 - April 30, 2020 Reynold Louis Gehlsen was born February 13, 1928, at Westside,Iowa, the son of Peter and Pauline Gehlsen. He passed away Thursday, April 30, 2020, surrounded by his family at the Crawford County Memorial Hospital in Denison, Iowa, at the age of ninety-two. Reynold graduated from Westside High School, where he participated in basketball and was a member of the 2nd team All Conference. Reynold enlisted in the United States Navy December 1, 1950, and served his country as a Navy Dental Technician. He was honorably discharged at Mare Island Naval Shipyard in Vallejo, California, September 21, 1954, and was awarded the National Defense Service Medal and the Good Conduct Medal. While in the Navy, Reynold began his interest in clothing sales when he was employed at J.C. Penney in Vallejo, California. After his return to Iowa in 1955, Reynold worked for nine months at J.C. Penney in Denison. From there, Reynold was employed by Jim Anderson for sixteen years at Anderson's Clothing, formerly Hoffines & Tim. On October 2, 1972 Reynold started his own men's clothing store, "Reynolds", which he was privileged to operate for many years and is now owned by his sons. Reynold was honored to celebrate his 75th birthday at the store. Reynold was united in marriage to Roseann Paulsen November 4, 1965, at the Zion Lutheran Church Chapel in Denison, Iowa. On November 4, 2005, Reynold and Roseann celebrated their 40th wedding anniversary with a dance and open house at the Five Mile House. In 1970, Reynold and Roseann became charter members of Our Savior Lutheran Church in Denison, Iowa. Having a strong Christian faith, Reynold was a member of the Our Savior Choir and the church's adult fellowship. Since a young person, Reynold was involved with the Hayes Township Scheutzen Verin (King Shoot) at the Five Mile House south of Westside, Iowa. It was the Five House and Jo-Mart Steak House Reynold enjoyed to frequent because he could socialize and polka to live music. Reynold loved watching basketball and football on television, especially his favorite team the Kansas City Chiefs. He also took great pride watching his grandchildren's sports and dance activities. Jeopardy and Wheel of Fortune were his television favorites. He also enjoyed going to the family farm during spring to harvest asparagus. Reynold always looked sharp with his neat and stylish attire which was highlighted by his ever-ready smile and personality. He really loved people and visiting with them and as a businessman, he was accommodating to everyone. Reynold was preceded in death by his parents; his wife, Roseann in 2017; four brothers, Raymond, Leonard, Louie and Ralph Gehlsen; and three sisters, Florence Saunders, Melvina Meyer and Blondina Stoffers. Survivors include: three sons, Brett Gehlsen and his wife, Katie, and Troy Gehlsen and his wife, Deb, and Shawn Gehlsen; six grandchildren; two sisters, Judy Joens and Sandra Hanson; other relatives and friends. Private Family Services were held 10:30 A.M., Tuesday, May 5, 2020, at Our Savior Lutheran Church in Denison, Iowa with Rev. Chad Trunkhill and Rev. David Loeschen officiating. Soloist Rylee Gehlsen sang "You'll Never Walk Alone." Organist Mary Kuhlmann provided accompaniment for congregational hymns "How Great Thou Art" and "The Old Rugged Cross." Serving as pallbearers were Abigail Gehlsen, Cooper Gehlsen,, Dylan Gehlsen, Rylee Gehlsen, Emily Gehlsen, Haley Gehlsen, Rich Stoffers and Ryan Paulsen. Military Honors were members of the Westside American Legion Post 196 and Denison American Legion Post 8. Following the service, the public was invited to a graveside service at 11:30 A.M. at the Crawford Heights Memorial Gardens in Denison. The Huebner Funeral Home in Denison was in charge of arrangements.

To plant a tree in memory of Reynold Gehlsen as a living tribute, please visit Tribute Store.

My thoughts and prayers go out to the Gehlsen Family. Reynold will always be remembered for the kindness and integrity he showed and for being a pillar of the Denison community for so many years. May God Bless Reynold and his loved ones.