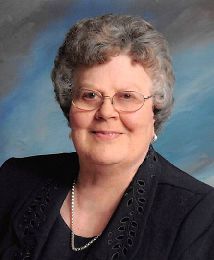 Lila Gustafson February 10, 1927 - April 3, 2020 "Lila Gustafson, 93 years, of Kiron died April 3, 2020 at Ruthven Community Care Center in Ruthven, Iowa. Lila was born to Clarence and Bessie (Bruce) Clauson on a farm northeast of Deloit, Iowa. After several years the family moved to Kiron where she attended school and graduated in 1944. After graduation she attended Buena Vista College and taught at Hayes Center in Ida County and then Stockholm #9. After furthering her education she received her BS degree at South Dakota University in Vermillion, South Dakota. She taught school for thirty-five years which included the Kiron, Deloit, and Denison elementary schools. On September 2, 1955 she was united in marriage to Willard Gustafson in a double wedding ceremony with her brother, Gordon Clauson and Nora Kennedy at the Kiron Baptist Church. Their family was complete with the arrival of a son, Marc Elliot and a daughter Mary Jo. Lila was baptized April 9, 1939, by Reverend Walfred Johnson. She was a Sunday school teacher for many years. Other offices held in the church were secretary of the Sunday School, Christian Education secretary, What I Can president, and financial secretary of the church. Upon retirement she became interested in doing crafts and traveled to craft shows. Lila and Willard enjoyed traveling, visiting 47 of the 50 states plus Canada. She was noted to put the coffee on when somebody came for a visit. Lila passed away Friday, April 3, 2020. At the time of her death she had attained the age of 93. Including her parents, she was preceded in death by her brother, Gordon, and her husband Willard. Those who remain to cherish her memory include a son, Marc Gustafson of Spencer, a daughter Mary Jo Litwiller and husband James. Two grandsons Brandon and Derek Litwiller all of Laurens, Iowa; numerous nieces, nephews, other relatives and friends. Lila was able to be viewed by the public on Wednesday, April 8, 2020 from 8:00AM to 7:00PM at Pauley Jones Pfannebecker Funeral Home in Denison, Iowa. A grave side service was held Thursday, April 9, 2020 at 10:00AM at the Kiron Cemetery in Kiron, Iowa. Pauley Jones Pfannebecker Funeral Home was in charge of arrangements."

To plant a tree in memory of Lila Gustafson as a living tribute, please visit Tribute Store.