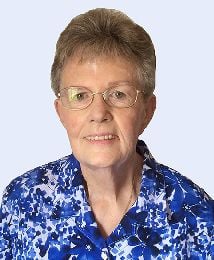 Sister Mary Celeste Hanigan OSF 1933-2019 Sister Celeste Hanigan, OSF, age 86, of Marcos, CA passed away on Saturday, November 30, 2019 in San Marcos. A Mass will be celebrated at 10:00 AM on Friday, December 20, 2019 at The Canticle, 841 13th Ave. No. in Clinton. Visitation will be from 4:00 to 8:00 PM Thursday, December 19th at The Canticle. A Rosary will be recited at 4:00 PM with a Scripture Service at 6:30 PM. Burial will be in St. Irenaeus Calvary Cemetery. The Pape Funeral Home is assisting. Sister Celeste Hanigan was born October 3, 1933, in Spalding, Nebraska, the fourth of five children of John and Kathleen (Sullivan) Hanigan. She was baptized Dolores Theresa at St. Michael Church in Spalding on October 15, 1933. She had two brothers, Thomas and Dan, and two sisters, LaGene and Claire. Dolores attended St. Rose of Lima Grade School and Denison Public High School in Denison, Iowa. After graduating from high school, she attended Mount St. Clare College in Clinton, Iowa, for two years before entering the Sisters of St. Francis on September 8, 1954. She received the name Mary Celeste at her reception June 16, 1955, made her first profession on August 12, 1957, and her final profession on August 12, 1960. Sister Celeste first ministered as an elementary teacher in parish schools in Iowa, Missouri and Illinois, including St. Rose of Lima in Denison from 1966 - 71. She went on to serve in leadership roles as a school principal, director of religious education, pastoral associate, and coordinator of adult faith formation in both Iowa and California. After retiring from full-time ministry in 2009, Sister Celeste resided in San Marcos, California, and continued to share her faith and wisdom with numerous friends and associates until her death. She was preceded in death by her parents and her brother, Thomas, and is survived by her sisters LaGene Webb and Claire Brown, her brother Dan, several nieces and nephews, Sandra McFarlane, who was her good friend and caregiver during her final years of life, and the Sisters of St. Francis, with whom she shared life for 65 years.