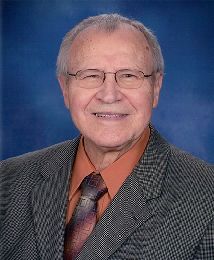 Fred Orren Hansen December 11, 1927 - January 27, 2020 Fred Orren Hansen, age 92 of Sac City, IA, formerly of Denison, IA, passed away peacefully on Monday, January 27, 2020, at Black Hawk Life Care Center in Lake View, IA. Fred Orren Hansen was born on December 11, 1927, to parents Fred P. and Hilda (Rowedder) Hansen in Hayes Township just south of Westside, IA. He was baptized on October 19, 1929, at his parent's home. Fred grew up and went to school in Gray, IA. He graduated from Gray Community School with the Class of 1946 as valedictorian. Sports were always a big part of his life, playing basketball during high school and then after graduating, playing softball with the local Gray softball team. On June 4, 1950, Fred married LaRue Hagge, the love of his life, at the Presbyterian Church in Manning, IA. Growing up, he was always known as Orren to his family and friends but after being drafted into the United States Army on February 4, 1952, he would be called by his given name, Fred. He and LaRue lived in El Paso, TX, while he was in radar training and then later moved to Fort Monroe, VA, until he was honorably discharged on February 3, 1954. After returning home, he and LaRue settled on a farm near Gray. Soon their family would begin with daughters, Cheryl and Lisa. They raised their girls in Denison where Fred worked as a butcher in a grocery store for many years. Later he would work in the quality control department for Farmland Foods where he retired in 1993 after 16 years of working there. Fred loved being outdoors, whether working in the yard or in the garden. His favorite things included an annual fishing trip to Minnesota in June. Fred loved to watch the Chicago Cubs ballgames. It was a longtime watching for dedicated fans like Fred and his brother Bob until the Cubs won the World Series in 2016. He also enjoyed watching the Iowa Hawkeyes play football and basketball and rarely missed an Iowa State game. Fred was a very supportive fan; always attending his grandchildren's sporting events. Although he never had a son, Fred was blessed with two son-in-laws and enjoyed time spent with them fishing, watching ballgames or playing cards. Fred was a family man and spent many weekends with his brothers and cousins and their families. There would most likely be a game of penny-ante poker or some other card game going on. Fred loved to sit on the deck and listen to the Big Band Music of the 40's, or Lawrence Welk or even some Polka. If he wasn't watching a ballgame on TV, his favorite shows were Blue Bloods or watching Hallmark Movies with his daughters. There might be a tear in their eyes, but there was always a happy ending. After retirement, Fred and LaRue loved spending time near their children at their cabin on Black Hawk Lake in Lake View. Fred was a very thoughtful and softspoken person that would greet you with his smile. He was a loving caregiver; helping LaRue take care of her parents when they became older by taking them to ballgames, fairs and parades. Later when LaRue had health issues, he was always by her side and took her to appointments. The greatest gift a parent can give their children is to show by example the person they should be. Fred's gentle and caring nature will be dearly missed by all that knew and loved him. Those left to cherish his memory include his daughters, Cheryl Campbell of Sac City, IA, and Lisa (Chuck) Struchen of Early, IA; grandchildren: Timothy (Adrienne) Campbell of Commerce City, CO, Todd (Abigail) Campbell of Saint Johnsbury, VT, Ashley Struchen (fiancé Darick Wold) of Owatonna, MN, and Austin Struchen (fiancé Rachel Boyle) of Holstein, IA; great-grandchildren: Ava, Sean and Sophia Campbell of Commerce City, CO, and Warren, Henry and William Campbell of Saint Johnsbury, VT; many nieces, nephews, cousins, extended family members and friends. Fred was preceded in death by his parents; his wife of 56 years, LaRue Hansen; son-in-law, Warren Campbell; brothers: Alvin (Alice) Hansen, Melvin Hansen, Robert Hansen and Billy (Maureen) Hansen; parents-in-law, Melvin and Eldora Hagge. Funeral Services were held on Friday, January 31, 2020, at the First Presbyterian Church in Sac City, IA. Burial took place at the Manning Cemetery in Manning, IA, under the direction of Farber & Otteman Funeral Home of Sac City.

To plant a tree in memory of Fred Hansen as a living tribute, please visit Tribute Store.