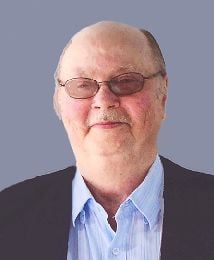 John Albert Hast January 19, 1943 - March 12, 2020 John Albert Hast, son of Albert W. Hast and Dorothy B. Hast, was born on January 19, 1943, on the family farm near Buck Grove, Iowa. He passed away Thursday, March 12, 2020, at his home in Denison, Iowa, at the age of seventy-seven. John was raised on the family farm and was a graduate of Denison High School class of 1962. In February of 1963, John was married to Sharon Ransom. John was employed as a baker at the Olson Bakery in Denison from 1963 to 1965. In the spring of 1965, John received employment as a Police Officer at the Denison Police Department until October 1, 1968, when he entered the United States Army serving in Germany. John was honorably discharged September 22, 1970, and received the National Defense Service Medal, Good Conduct Medal and Sharpshooter M-14, M-16 Award. October 9, 1969, John entered into marriage with Karol S. Meadows in Vermillion, South Dakota. After his discharge from the service, John resumed his career at the Denison Police Department until the fall of 1982, obtaining the rank of Captain. In March of 1983, John began employment at Farmland Foods until he retired in 2005. He also drove school bus, assembled motorcycles at the Honda Shop and after retirement, he would shuttle vehicles for Adams Motors. John was a member of Zion Lutheran Church in Denison. There was not a dog he didn't love and enjoyed working with and training his dogs. He also found pleasure in hunting, fishing, photography, woodworking, working with stain glass, card playing and working with his computer on many projects. John loved printing photos and figuring out how to use different computer programs and playing cards on his computer. John was known for the fact whenever he purchased a new item, if it had a manual with it, he would read it completely before using the product, including car manuals. John also loved to mushroom hunt and loved eating them as much as hunting for them, and would never reveal his secret spots for finding them. He loved his family and spending time doing things with them and teaching everyone about the things he loved. His family includes his wife of 50 years, Karol S.; one son, James T. and wife, Nancy; three daughters, Teresa L. and husband, Todd, Pamella M. and husband, Michael, and Jennifer S. and husband, Tyson; twelve grandchildren: BriAnne, Jenna, Kristin, Jordan, Rebecca, Laura, Lisa, Tim, Pat, Calista, Derek, and Parker; sixteen great-grandchildren; one sister, Vernetta; one brother, Phillip and wife, Mavis; one sister-in-law, Maxine; other relatives and friends. Besides his parents, John was preceded in death by two brothers, Russell and Dean and brother-in-law, Darrell. Funeral Services were held 10:30 A.M., Tuesday, March 17, 2020, at Grace Church in Denison, Iowa. Pastor Brian Rihner officiated the service with interment in the Oakland Cemetery. Recorded music selections included "How Great Thou Art by The Statler Brothers," "Jealous of the Angels" by Donna Taggart, and "Amazing Grace" by The Statler Brothers. Serving as honorary pallbearers were Dennis J. Fineran and Shimendi Embaye. Serving as pallbearers were Parker Preul, Tyson Preul, Todd Uhl, Randy Markel, Jose Recinos and Jim Hast. Military Honors were members of the Denison American Legion Post 8. The family invited everyone to Boulders Conference Center for fellowship and lunch provided by the Ladies of Grace and catered by Staley's. The Huebner Funeral Home in Denison was in charge of arrangements.