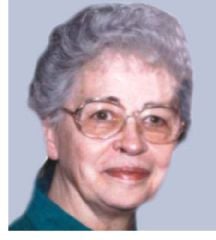 Ada Marie Helkenn October 7, 1927 - January 13, 2020 Ada Marie Helkenn, daughter of Harry and Launa (Eagle) Riley, passed away at Maple Heights Care Center in Mapleton, Iowa on January 13, 2020, at the age of 92. She was surrounded by her loving family at the time of her death. Ada was born at home in rural Fairfield, Iowa, on October 7, 1927. She was baptized at St. Ann's Catholic Church in Vail, Iowa, and later confirmed in her faith there as well. She went to grade school in the country near her childhood home, and to further her education she attended St. Ann's Academy in Vail, where she graduated at the top of her class. At the age of 22 she married the love of her life Arthur August Helkenn on November 23, 1949 at St. Ann's Catholic Church. Ada was blessed with nine children: Ellen, Raymond, Stephen, Patricia, Cecelia, Judith, William, Timothy, and Jennifer. Ada was a stay at home mother for some time before joining the work force. For a short time she worked at Montgomery Ward in Denison, Iowa as a sales clerk. She also worked at West Central Development in Denison as an Outreach Coordinator, and then found the job that she admired the most as a Residential Advisor at Job Corps which was also in Denison. After retirement she enjoyed prayer time with some very special people. Praying the rosary gave her the greatest comfort and peace. Ada was preceded in death by her parents Harry and Launa Riley, her husband Arthur, her infant son Stephen John Helkenn, as well as her four brothers and four sisters. Those left to cherish her memory include her children, Ellen and husband Mark Janssen of Schleswig, Iowa; Raymond and wife Sylvia Helkenn of Council Bluffs, Iowa; Patricia and husband Bob Niehaus of Vail, Iowa; Cecelia and husband Bob Jackson of Crystal Beach, Texas; Judith and husband Larry Jensen of Schleswig, Iowa; William Mark Gerad Helkenn of Schleswig, Iowa; Timothy Helkenn and his special friend Betty of Schleswig, Iowa; Jennifer and husband Jim Boeckman of Schleswig, Iowa; 20 grandchildren, 7 step grandchildren, 43 great grandchildren, 10 step great grandchildren, and 5 great-great grandchildren, nieces, nephews, and other family members and friends. Visitation was held at Pauley Jones Pfannebecker Funeral Home on Monday, February 3, 2020, beginning with a Rosary by the ladies group of the Sacred Heart Catholic Church, and a prayer service was held at the end of the visitation by Father Richard Ball. Mass of Christian Burial was held at Sacred Heart Catholic Church on Tuesday, February 4, 2020, with Father Richard Ball celebrating. Music was provided by Kay Bloyer and Mahala Kruse. Readings by Mike Hittle. Eucharistic ministers were John and Diane Staples. Gift bearers were Markenna Janssen and Tiffany Friedrichsen. Scott March, Nicholas Helkenn, Joshua Niehaus, Matthew Niehaus, Andrew Niehaus, Justin Jackson, Austin Jackson, Koda Jensen, Jacob Helkenn, Nathan Hare, Stephen Helkenn, Justin Reiter, Tyson Boeckman, Colton Boeckman were honorary casket bearers. Burial was held at St. Ann's Cemetery in Vail, Iowa. Pauley Jones Pfannebecker Funeral Home was in charge of arrangements.

To plant a tree in memory of Ada Helkenn as a living tribute, please visit Tribute Store.