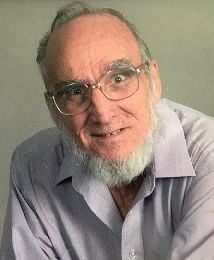 Lawrence Thomas Henkelman April 5, 1941 - March 21, 2020 Lawrence "Bob" Thomas Henkelman, son of Catherine Marie Henkelman was born April 5, 1941 in Sioux City, Iowa. He attended grade school at St. Lawrence in Carroll then graduated from Wall Lake School in Wall Lake, Iowa. Bob was inducted into the US Marines on December 31, 1958. He was honorably discharged on February 21, 1965. On August 22, 1964 Bob was united in marriage with Diane Jentzen at Zion Lutheran Church in Arcadia. Four children were born to this union. Bob worked at several different jobs in life. He spent most of his working years at American Protein in Manning and Bedrock Redi Mix in Denison. There was never a job that couldn't be done in his mind. He knew a little of everything. He was truly a jack of all trades but a master of none. Diane died of cancer in 2018 and Bob continued to live in their home. Bob was a member of Zion Lutheran Church. Bob was also diagnosed with cancer in 2009. He died at home surrounded by his family, early in the morning on Saturday, March 21, 2020. He was 78 years, 11 months and 16 days of age. Besides his wife Diane of 53 years, Bob was preceded in death by his grandparents; mother Marie and dad Art Walters; sister Margaret Kaderabek; and brothers-in-law John Lawler and Ray Hike. He is survived by his children: Carla Rodriquez, Manning; Tammy Winter (Todd), Manning; Lisa Steffes, Manning; Jeff Henkelman, Creston; 10 grandchildren: Chelci, Dawn, Stephanie, A.J., Jessica, Rachel, Michael, Brendan, Autumn and Grace; 6 great-grandchildren: Payden, Logan, Kamryn, Kadynce, Blake, Ryder and Rese; siblings: JoAnn Herboth (Don) of Altamont, IL; Monica Hike of Marion, IA; Ronnie Walters of East Alton, IL; Ed Walters (Christina) of Shumway, IL; Mike Walters (Norma) of Cowden, IL; Patricia Holliday (Brad) of Greenfield, IN; sister-in-law Sharil Lawler of Vail, IA; brother-in-law Allen Davis of San Antonio, TX; half sister-in-law Karen Jentzen (special friend Tom Clark) of Hope, ID; step sister Kathy Grinstead (special friend Floyd) of Creston; other relatives and friends. Arrangements entrusted to Ohde Funeral Home, Manning, Iowa.

To plant a tree in memory of Lawrence Henkelman as a living tribute, please visit Tribute Store.