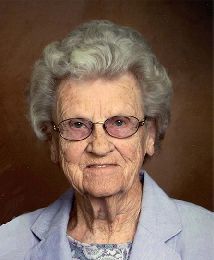 Ellen Lucille Henningsen March 30, 1924 - May 5, 2020 Ellen Lucille Henningsen, daughter of Henry and Alma Schultz, was born March 30, 1924, at Kiron, Iowa. She passed away Tuesday, May 5, 2020, at Eventide Lutheran Home in Denison, Iowa, at the age of ninety-six. Ellen was baptized into Christ May 24, 1924, at St. John's Lutheran Church, Stockholm Township. She was confirmed May 5, 1938, by Rev. Ferdinand Reith also at St. John's Lutheran Church. Ellen received her education at Otter Creek No. 1 near Kiron. After completing her schooling, she helped on the family farm and also assisted in various homes as needed. January 17, 1945, Ellen was united in marriage with Harold Henningsen at Zion Lutheran Church in Denison officiated by Rev. C.W. Schmidt. To this union, five children were born: Betty, Howard, Beverly, Brenda and John. Harold and Ellen became members of Our Savior Lutheran Church in Denison where Ellen was still a member. In addition to helping her husband on the farm, she was employed at Lil Duffer Restaurant in Denison for six years and worked in the Silver Spurs lunch stand for all horse shows. Ellen enjoyed gardening, flowers, sewing, cooking, canning, square dancing and playing cards. She made quilts for all of her children and grandchildren. Dressing out numerous ducks and geese for customers at Thanksgiving and Christmas was another of her achievements. In her spare time, she enjoyed spending time with her family and especially her grandchildren, great-grandchildren and great-great-grandchildren. Ellen was preceded in death by her parents; her husband, Harold in 2017; one daughter, Betty; one grandson, Gene; and her brother, Ralph and his wife, Elsie. Survivors include: two sons, Howard and his wife, Linda, and John and his wife, Kim; two daughters, Beverly and her husband, Steve, and Brenda and friend Jamie; son-in-law, Bill; fifteen grandchildren; twenty-six great-grandchildren; two great-great-grandchildren; one sister-in-law, Virgie; other relatives and friends. Private Family Services were held 10:30 A.M., Friday, May 8, 2020, at Huebner Funeral Home in Denison, Iowa. Rev. Chad Trunkhill officiated the service with interment in Crawford Heights Memory Gardens in Denison. Music selections included "The Lord's Prayer" by Henry Henningsen and "I Know That My Redeemer Lives." Serving as honorary pallbearers were Ellen's Grandchildren and Great-Grandchildren. The Huebner Funeral Home in Denison was in charge of arrangements.

To plant a tree in memory of Ellen Henningsen as a living tribute, please visit Tribute Store.