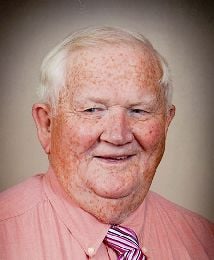 James Raymond Hermeling July 14, 1935 - October 2, 2019 James Raymond Hermeling was born July 14, 1935, in Westphalia, Iowa, the son of Anthony and Margaret Murray Hermeling. He passed away Wednesday, October 2, 2019, at his home in Manilla, Iowa, at the age of eighty-four. James received his education at St. Boniface School in Westphalia, Iowa, and graduated with the class of 1953. He furthered his education at a barber college in Des Moines, Iowa. James enlisted in the United States Army January 19, 1955, and served his country until being honorably discharged as a Sp 3 (T) on January 9, 1958. During his military career, he served some time in Germany and was awarded a sharpshooter medal. On June 30, 1958, James was united in marriage to Mary Heller at St. Peter Catholic Church in Defiance, Iowa. James was a member of Sacred Heart Catholic Church in Manilla since 1958. He was employed as a barber for thirty years, working in different locations and for Bilsten's in Denison. He also worked as a card dealer on a river boat for seven years. James enjoyed playing cards and driving around town and neighboring towns. He spent many pleasurable hours watching and attending his children's sporting events as well as watching sports on television with his favorite teams being the New York Yankees and the Iowa Hawkeyes. Fishing and bowling were favorite pastimes as he enjoyed fishing in Minnesota as well as in local places and bowled in many tournaments. Attending family reunions in Minnesota was also a fun time for him and they would take one route up to Minnesota and would take another route home. Preceding him in death were his parents; two sisters, Monica Moritz and her husband, Fritz and Bonita Nielsen and her husband, Harley; and two brothers, John and William Hermeling. Survivors include: his wife, Mary Hermeling of Manilla, Iowa; one daughter, Kathy Simon and her husband, Jeff of Council Bluffs, Iowa; one son, Kevin Hermeling and his wife, Kiely of Gretna, Nebraska; six grandchildren; one sister, Betty Huebert and her husband, Gerald of Portsmouth, Iowa; other relatives and friends. Mass of Christian Burial was held 10:30 A.M., Monday, October 7, 2019, at Sacred Heart Catholic Church in Manilla, Iowa. Fr. Paul Nguyen served as Celebrant of the Mass with inurnment in the Mt. Olivet Cemetery in Manilla. Organist Irene Feilmeier provided accompaniment for the Sacred Heart Choir. Serving as lector was Pat Wuestewald; Terry & LaVonne Schulte and Pat Wuestewald served as Eucharistic Ministers. Serving as honorary pallbearers and gift bearers were James Grandchildren: James Patrick Simon, Emma Hermeling, Nixon Hermeling, Claire Hermeling, Lizzy Hermeling and Julia Hermeling. Military Honors were members of the American Legion Post 132 of Manilla. Sunday Services included a 5 PM Rosary led by Carleen Schwieso and a 7:30 PM Prayer Service led by Fr. Paul Nguyen. The family invited everyone to return to the church for fellowship and lunch provided by the Sacred Heart Ladies. The Huebner Funeral Home was in charge of arrangements.

To plant a tree in memory of James Hermeling as a living tribute, please visit Tribute Store.