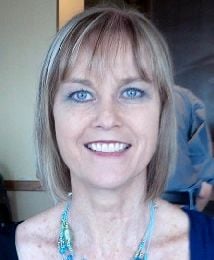 Colleen (O'Brien) Jackson August 9, 1960 - February 9, 2020 Colleen Patricia (O'Brien) Jackson, 59, passed away Sunday, February 9, 2020 in Marshall, MO., surrounded by love. Colleen was born in Sioux City, Iowa on August 9, 1960 to Robert and Nella (Chayka) O'Brien. She was the sixth of seven children. When Colleen was five, the family moved to Schleswig, IA, where she attended Schleswig Community schools. She participated with great joy in marching band, singing, cheerleading, and was a pitcher on the softball team. She graduated from Schleswig High School in 1978. After graduation, she worked as a travel agent in Denison, IA, before moving to Kansas City. On November 28, 1992 Colleen married the love of her life, Mark Jackson. The two met at work and knew it was something very special. They both had a love for family, especially Mark's son Christgen, their many dogs, cruises, and the Kansas City Chiefs! The sun and beach was her favorite place on earth. Their many trips with family to Cancun, were when she was her happiest. Colleen had a passion for hard work and success. One of her positions in Kansas City was in travel management for the agency who handled the arrangements for the Chiefs players and families. It was a dream job! Colleen moved on to travel for work herself. She loved spending time in different cities all over the country and Canada as a management consultant. She had much success and was admired greatly by her many colleagues. Mark and Colleen's success in business moved them from Kansas City, to the Dallas area, Chicago and back to Dallas again; always enjoying the new adventure with each other. They knew it was time to get closer to home and family in 2012 and moved back to the Kansas City area, where they made their home in Marshall, MO, near Mark's family. Colleen loved being back in a small town close to loved ones. Those left to cherish her memory are her loving husband of 27 years, Mark, stepson Christgen and his fiancé Jessikah, Mother Nella (Chayka) O'Brien, siblings; Bob, Jr., Kathleen, Timothy (Julie), Patrick (Sherri) and Maureen Hall, (Ron). Her Mother-in-law, Shirley Lundy and Brother-in-law Matt Jackson. Many loving Nieces and Nephews, her beautiful Great-Nieces and Nephews as well as her Aunts, Uncles and cousins who love her very much. She is preceded in death by her Father, Robert J. O'Brien, brother Kevin, and her precious puppies, whom we are sure were all there to greet her in heaven. In lieu of flowers, Mark would like donations to be made to The Alzheimer's Association in Colleen's memory. Services will be held at the Campbell-Lewis Funeral Home, 226 S Odell Ave, Marshall, MO on Saturday, February 15, 2020. Visitation with the family at 1:00pm with the service beginning at 2:00pm. Interment will follow at Ridge Park Cemetery. The family invites those attending to join them for a gathering after. Plans to be announced.

To plant a tree in memory of Colleen Jackson as a living tribute, please visit Tribute Store.