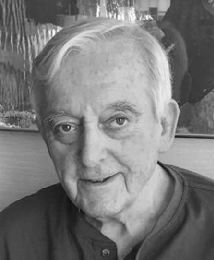 Russel Robert Jensen June 6, 1927 - November 16, 2019 Russel R. Jensen passed at home in Milwaukee, Wisconsin on November 16, 2019 at age 92. He grew up on farms west and north of Denison, Iowa, the only child of Frank and Leona (née Kolls). He served in the Army in Japan from 1946 to 1948, then attended the University of Iowa until recalled to active duty in Korea in 1950 and 1951. After a degree in actuarial science in 1954, Russ came to work at Northwestern Mutual Life in Milwaukee. He and Jenevie (née Nelson) of Suring, Wisconsin, were married in 1957 and made their home in Mequon and Thiensville. During their 62 years of marriage, they often enjoyed family vacations, whether driving around the country or traveling the world. Russ loved the desert Southwest. After Russ retired from NML as Senior Vice President in 1985, they moved to downtown Milwaukee. They spent the next 25 winters at their home in Green Valley, Arizona, enjoying the sunsets on the mountains. He recently recalled it was a "wonderful life". Russ was an avid reader, enjoying poetry and philosophy. He would often recite a poem appropriate to the occasion, bringing wit and poignancy to the moment. Russ is survived by Jenevie, son Chris (and Lori) Jensen of Downers Grove, Illinois, and their children Erik and Elizabeth, and by daughter Tina (and Lawrence) O'Brien in Holualoa, Hawaii. Unless I'm wrong I but obey The urge of a song: "I'm-bound-away!" - Robert Frost