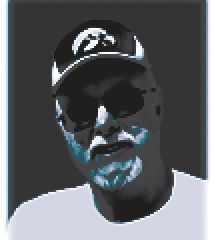 John Roger "Sparky" McClellan April 15, 1955 - November 27, 2019 John Roger "Sparky" McClellan, was born April 15, 1955 in Denison, IA to Jobe and Mary McClellan. He graduated from Denison High School in 1973 and continued to work at McClellan Electric with his father and grandfather. On August 17, 1974, he was joined in marriage with Wilma Darlene (Pryor) in Denison, IA. From this union, 3 daughters were born: Christina, Cassie and Carrissa. John and Wilma have resided in Schleswig, IA since 1978. He passed away unexpectedly in his home in Schleswig Wednesday, November 27, 2019. In 1982, John and his father took ownership of the family business. After his father passed in 2001, he became a sole owner. He spent his time enjoying all aspects of the business until retiring in 2012. Upon his retirement, John and Wilma remodeled a lake home in Spirit Lake, IA. John looked forward to his trips back to Schleswig for poker games and yard care, but above all, he loved spending time with his family. John enjoyed fishing, Hawkeye football, traveling with his children while they were young, and traveling the world with Wilma as they aged. American history and rilling others with his personal political views became a dedicated passion. His favorite thing was spending time at Lake Okoboji with family and friends. He would find enjoyment taking everyone tubing by watching them all "earn their wings", annual bottle rocket fights, and observing the fireworks by boat on the 4th of July. While raising his family, he was very involved in the community. He was a member of the United Church of Christ where he enjoyed singing in the choir and spent many years on the board. The community meant a lot to him and he enjoyed participating in the Denison Jaycees, Schleswig Community Club and Odd Fellows in Carroll. John is survived by his wife Wilma, daughters Christina (Derek) Gagne of Avoca, IA; Cassie (Cohen) Johnson of Avoca, IA and Carrissa (Zach) Meiners of Denison, IA; ten grandchildren, Ian, Owen, Kaeden, Emmie, Adisyn, Oriah, Ethan, Jake, Aylin and Isaac; sister Deb Kuehl (special friend Jim Aswegan) of Lake View, IA; sister-in-law Cheryl (Roger) Lueck of Denison, IA. John is preceded into death by: his mother Mary, father Jobe Sr., father in-law William Curtis, mother-in-law Doris, brother Jobe Jr., sister in-law Betty, brother in-law William, grandfather John, and grandmother Ladean. Funeral Services were held 10:30 A.M., Tuesday, December 10, 2019, at United Church of Christ in Schleswig, Iowa. Rev. Duane Mullen officiated the service with interment in the Morgan Cemetery in Schleswig. Organist Tammy Neubauer provided accompaniment for congregational hymns "How Great Thou Art" and "On Eagles' Wings." Recorded selections included "When I Get Where I'm Going" by Brad Paisley and "10,000 Angels by a Recorded Choir. Serving as honorary pallbearers were Jason Korner, Roger Lueck and Bill Deets. Serving as pallbearers were Jim Aswegan, Jason McClellan, Curt Korner, Mark Kuehl, Sean Kuehl and Tom Hast. The family invited everyone to return to the church for fellowship and lunch provided by the Evening Guild and catered by Lidderdale Country Store. The Huebner Funeral Home was in charge of arrangements.

To plant a tree in memory of John McClellan as a living tribute, please visit Tribute Store.