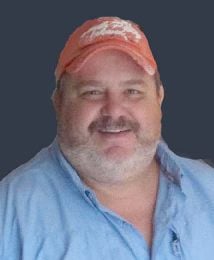 Keenan McClellan June 1, 1962 - April 16, 2020 Keenan Layne McClellan, the son of Wayland and Jan McClellan, was born June 1, 1962, in Levelland, Texas. He passed away Thursday, April 16, 2020, in his home near Schleswig, Iowa, at the age of fifty-seven. Keenan graduated from high school in Fayetteville, North Carolina, in the class of 1980. With a baseball scholarship, Keenan attended York College in York, Nebraska, where he received an Associates Degree in 1982. On January 2, 1982, Keenan and April Meyers were united in marriage. Keenan was a loyal and dedicated employee at RichFine Grading, where he worked in the landscaping division for six years. In the early 90's, Keenan and April moved to Schleswig, Iowa, where Keenan would settle with his family and become one of the most dedicated management employees in the ag field, working in both Schleswig and Charter Oak for thirty years. An avid outdoors man, Keenan enjoyed hunting and was a passionate fisherman. Keenan took his passion for fishing and shared all that he could with his children and grandchildren. From making rods and tackle to fishing trips, Keenan found peace in every moment. In addition to being a loving husband, father and grandfather, Keenan was a man of his word who always put others before himself. Compassionate, patient and loving, he was a natural mediator, always wanting peace between those he cared about. Keenan was an example we all hope to follow. Keenan was preceded in death by his grandparents. Survivors include: his wife, April; one daughter, Chelsey and her husband, Jason; one son, Tyler and his wife, Barbara Jeanne; six grandchildren: Colton, Keenan, Griffin, Paxton, Mason and Mackenzie; his parents, Wayland and Jan; one sister, D'Ann and her husband, Mark; one brother, Cory and his wife, Tracy; other relatives and friends. Private Family Services were held 2:00 P.M. Monday, April 20, 2020, at the Huebner Funeral Home in Denison, Iowa. Rev. Brian Kinney officiated the service with interment in the Morgan Cemetery in Schleswig, Iowa. Recorded music selection included "Amazing Grace, My Chains are Gone" by Chris Tomlin. The Huebner Funeral Home in Denison was in charge of arrangements.

To plant a tree in memory of Keenan McClellan as a living tribute, please visit Tribute Store.