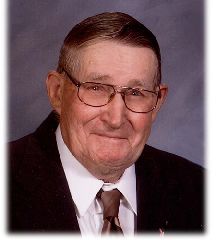 Theodore Edgar Meseck April 17, 1926 - February 13, 2020 Theodore Edgar Meseck "Slugger" was born April 17, 1926, the seventh child of Theodore E. And Ella (Hopp) Meseck. He entered his eternal rest Thursday, February 13, 2020. Edgar was baptized May 23, 1926, and later confirmed May 4, 1941, at Immanuel Lutheran Church, Soldier Township. On July 29, 1945, Edgar was married to Elvera Kroll and they were blessed with the birth of five children. Edgar farmed in his early years and worked for Baak Implement outside of Ricketts. They moved to Schleswig in 1964 and became members of Immanuel Lutheran Church. He was proud to have had two sons serve in the United States Army. Edgar was employed by the Schleswig Community Schools as a custodian at the high school and later became head custodian for twenty-two years. Edgar retired in 1989 and enjoyed his hobby of restoring tractors and going to sales. Reading Our Iowa and Red Power magazines along with visits from friends and family was how he loved to spend his days. Going on road trips was also an adventure and he especially cherished time spent with grandchildren, great-grandchildren and his great-great-grandson. He could spend hours talking tractors and reliving times gone by with the nieces and nephews who stopped and made it an exceptionally wonderful day. He was always sure to thank them and tell them to stop again. When weather allowed, he could be found in the lot under the shade tree where visitors were plenty and stories were told. When Elvera entered Eventide, he made the daily drive to spend the early hours of the day with her. In December of 2019, it was becoming more difficult for him to get around and comfort care was given to him by Crawford County Hospice. He was most grateful for their care, concern and comfort. Edgar was preceded in death by his wife, Elvera; son, Francis; parents; seven of his siblings and their spouses, along with his in-laws. Those left to cherish his memory are: his sons, Gary Meseck and Arlen (Suzie) Meseck; daughters, Linda Reimer (Gary) and Nancy Kline (Terry); grandchildren: Patricia (Brian), Lisa (Mike), Jerrod (Trish), Stacy (Scott), Trevor, Troy, Alexia, Brandon (Kerry), and Trevor; great-grandchildren: Denim (Erica), Jezlynn (Tanner), Trey, Tayten, Hunter (Ciara), Maxwell, Emma, Tanner, Conner, Keegan, Reed, Isla and Brentley; one great-great-grandson, Hoyt; sister, Lori Bumann; many nieces and nephews; and many special friends who all held a special place in his heart. Funeral Services were held 10:30 A.M., Thursday, February 20, 2020, at Immanuel Lutheran Church in Schleswig, Iowa. Rev. Merle Mahnken officiated the service with interment in the Morgan Cemetery in Schleswig. Organist Marlene Hight provided accompaniment for congregational hymns "How Great Thou Art," "Nearer, My God to Thee," "What a Friend We Have in Jesus" and "Rock of Ages." Serving as honorary pallbearers were Patricia Schechinger, Lisa Holloway, Stacy Lindgren and Alexia Meseck. Serving as pallbearers were Denim Schechinger, Brandon Meseck, Hunter Lindgren, Conner Reimer, Jerrod Reimer, Troy Kline and Trevor Kline. The family invited everyone to return to the church for fellowship and lunch provided by the Ladies Aid and catered by Staley's. The Huebner Funeral Home in Schleswig was in charge of arrangements.

To plant a tree in memory of Theodore Meseck as a living tribute, please visit Tribute Store.