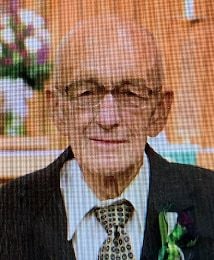 Neal George Moeller June 29, 1930 - May 10, 2020 "You remember when I was a boy," Neal Moeller said to his daughter Mary before every story. Of course, Neal lived his whole life as if he was young: joyful in all things, spending time outdoors, building things, and thinking about the future. As a son of Herbert and Marguerite (Giblin) Moeller, Neal George Moeller was born on June 29, 1930 in Crawford County, Iowa. He was a lifelong member of St. Rose of Lima Catholic Church in Denison. Neal attended country school in Denison and graduated high school in 1947 from Denison High School. Following high school, Neal enlisted into the United States Army National Guard. On August 19, 1950, Neal was united in marriage to Barbara Ann Servoss at St. Rose of Lima Catholic Church. Neal & Barb built their home in Denison, literally- building the two houses he lived in with help and guidance from friends and family. Their union was blessed with seven children: Gregory, Dale, Clair, Michael, Annette, Mary, and David. With the exception of one year while Neal was serving in San Marcos, Texas, they made their home in Denison. Most of Neal's adult life he spent working. He worked for the Crawford County REC Department from 1947-1965 as an electrician, a line foreman, as director of facilities for Midwestern College in Denison from 1965-1970, Builder's Lumber from 1970-1972, and Denison Community School District as the head of maintenance for facilities from 1972 -1990. On top of working these jobs, he served in the Army National Guard from 1947 to 1962, reaching the rank of 1st Lt, and was a proud L-19 pilot, He rejoined in 1977 until the mid-80s and served as mess sergeant for the local 133rd Combat Support Company . He was so proud to have many children and grandchildren serve our country. Neal lived a busy work life and a busy personal life. "Retiring" led to raising limousine cattle with his brothers, on the family's century farm. Neal enjoyed every aspect of the outdoors and wanted future generations to have the same opportunity. In 1963, he led the effort to establish the Crawford County Conservation board where he served as President for more than 50 years. He provided the vision and will to establish, Nelson Park, The S.E. Dow House and Yellow Smoke Park for the enjoyment of all. The Nature Center at Yellow Smoke is named after him. A volunteer fireman, Boy Scout Troop 55 leader with his beloved wife Barbara, a member of the Knights of Columbus, Neal was an active man. But his true testament was his family. His candy jar was ready for his grandchildren to raid. His kids looked forward to sitting on the fire truck watching fireworks on the Fourth of July while he was a volunteer fireman. Neal put his family first and his family thought the world of him. To them, he was the smartest, wisest man in the world. On Sunday, May 10, 2020, Neal passed away at Eventide Lutheran Home. At the time of his death he attained the age of 89 years, 10 months, and 11 days. He was preceded in death by his parents, his wife Barbara Ann Moeller, daughter-in-law Darcy Moeller, brothers John Roger and Barry Moeller, and his brother-in-law Tom Slatery. Those left to cherish his memory are his children Gregory and his wife Barbara Moeller of Des Moines, Iowa; Dale and his wife Helen Moeller of Mahopac, New York; Clair and his wife Donna Moeller of Birchwood, Wisconsin; Michael and his wife Jane Moeller of Lake City, Iowa; Annette and her husband Kelly Salsbery of Nacogdoches, Texas; Mary and her husband Daniel Eiten of Denison, Iowa; David Moeller and his special friend Rita Reidy of Indianola, Iowa; 19 grandchildren; 38 great-grandchildren; siblings Darrell and his wife Vera Moeller of Denison, Iowa; and Beverly Slatery. A CDC regulated public viewing was held on Thursday, May 14, 2020 at Pauley Jones Pfannebecker Funeral Home in Denison, Iowa from 12:00PM - 7:00PM. A private family funeral service was held on Friday, May 15, 2020 at 10:30AM also at Pauley Jones Pfannebecker Funeral Home in Denison. Father Randy Schon officiated the service. The musical recordings were "How Great Thou Art", "You Are Mine", and "Amazing Grace". Gregory Moeller was the lector of the readings; Wisdom 3:1-6, 9 & Romans 14:7-9, 10b-12. A burial was held immediately after the service at St. Rose of Lima Catholic Cemetery in Denison. Pauley Jones Pfannebecker Funeral Home was in charge of arrangements.

To plant a tree in memory of Neal Moeller as a living tribute, please visit Tribute Store.