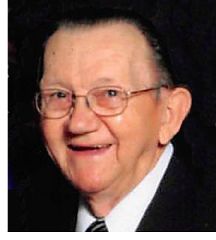 Andrew J. Nelson January 14, 1927 - February 13, 2020 Andrew "Andy" Nelson, the son of Andrew R. and Esther K. (Sallstrom) Nelson, was born on January 14, 1927 in Scottsbluff, Nebraska. Born with club feet, his mom took Andy to Denver, Colorado via train so he could have surgery. Andy had different jobs growing up: working in the hospital his parents started, working on a farm, helping raise cattle, and many other things. Andy graduated from Scottsbluff High School in 1945. His family moved to Greeley, Colorado shortly after. While in Greeley, they were members of the Evangelical Covenant Church. This is where he met his good friend, Herb Duell. Herb sparked an interest in Andy to do missionary work. To follow this path, he enrolled in North Park College. Due to his nearsightedness, Andy left after one semester. But the gospel still meant everything to him. In 1949, Andy met Virginia Johnson when he was visiting Odebolt, IA with his friend Herb. The two hit it off and were married on November 24, 1950 in Odebolt. To this union, two children were born: Wesley and Beverly. When the opportunity came to buy the Sundry Store in Kiron, Andy took a train to Denison to talk business. The family soon came with him when the purchase went through. Andy and Virginia owned the store around 14 years selling gifts, greeting cards, carbonated drinks, coffee, and lots of candy. It became known as "Andy's Candy". After selling the store, Andy worked at the drug store in Denison, helped farmers with their farming, delivered flowers and was also a substitute mail carrier. He loved being able to have various conversations with people in the community. Andy was a family man first. He loved playing with his kids and grandkids, sharing joy and laughter in their stories. He had a beautiful, bass singing voice, often being a part of quartets. Ice cream and popcorn were his favorite snacks, something he shared often with his grandkids. He had a musical soul and always wanted to make a joyful noise for our Lord and Savior. He was a member of Baptist Churches in Kiron and Denison. On February 13, 2020, Andy entered through the Pearly Gates of Heaven, attaining the age of 93 years and 30 days. He was met by his parents; his son Wesley; and his siblings Margaret "Peggy" Gosnell, Arthur William "Bill" Nelson, and Lorraine Hendrickson. Those left to cherish his memory are his wife H. Virginia of Denison; his daughter Beverly Huldeen and her husband Brent of Greenwood, Indiana; grandchildren Mitch Nelson and his wife Erin; Sarah Strauss and her fiancé Jerry Rafferty; Philip Huldeen and his wife Suzi; and Ruth Jensen and her husband Philip; great grandchildren Brenna and Laney Nelson; Elias and Lucy Strauss; Roger and Micah Jensen; and Elsie Huldeen; and many other family members and friends. A visitation was held at Pauley Jones Pfannebecker Funeral Home from 4:00PM to 7:00PM on Thursday, February 20, 2020. The Funeral Service was held Friday, February 21, 2020 at 11:00AM at Kiron First Baptist Church in Kiron, Iowa, with Pastor Brian Rhiner celebrating. Music was provided by the family, as well as Sue Kaihoi and Claudia Rhiner. Mitch A. Nelson, Philip J. Huldeen, Philip D. Jensen, Jerry Rafferty, Forrest Mauritz, and Stanley Mauritz were honorary casket bearers. Burial was held at Odebolt Cemetery in Odebolt, Iowa, officiated by Pastor Bruce Kaihoi.

To plant a tree in memory of Andrew Nelson as a living tribute, please visit Tribute Store.