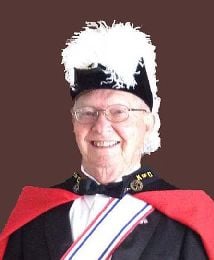 Kay James Olson December 4, 1935 - January 12, 2020 Kay James Olson was born December 4, 1935, in Wesley, Iowa, the son of Ervin and Emma Laux Olson. He passed away Sunday, January 12, 2020, at the University of Nebraska Medical Center in Omaha, Nebraska, at the age of eighty-four. Kay received his education in the Wesley school and graduated from Wesley High School with the class of 1953. He continued his education at Northern Iowa Area Community College and received an Associate Degree in Accounting. Kay was then employed by Union Pacific. He was united in marriage to Mary Lou Mathison May 19, 1958 and the couple was blessed with two daughters, Lori and Shelly. Kay entered the United States Army June 17, 1958, and served his country as a JAG court reporter. He was honorably discharged as an SP4 June 16, 1960, and was awarded the Sharpshooter Badge (Rifle) and Good Conduct Medal. After returning from the service, he was employed at Iowa Beef Processors beginning in 1962, then went to Dakota City, moved to Blair, Nebraska and then back to Denison. Kay was employed at World Wide Meats from 1973 until 1975 when he bought into the local Coast to Coast store, which he operated for many years. Golfing, bowling, playing Euchre and other cards, hunting pheasants and deer in Iowa and hunting elk in Wyoming were his favorite pastimes. He also enjoyed boating, water skiing, camping and car races. Kay and Mary Lou lived in a motor home while traveling in Arizona, Texas, New Mexico, and Nevada as Western Horizons members. Kay especially enjoyed spending time with his family. Preceding Kay in death were his parents; one grandson, Dustin Solberg; one great-granddaughter, Shelby; three sisters, Florence Wagner and her husband, Oscar, Lucille Pink and her husband, Robert, and Rose Blau and her husband Merle; four brothers, Pete Olson and his wife, Phyllis, Don Olson, Wally Olson and his wife, Valerie, and Bob Olson and his wife, Pat; and one brother-in-law, John Grindstaff. Survivors include: his wife, Mary Lou Olson of Denison, Iowa; two daughters, Lori Solberg and her husband, Larry of Denison, Iowa, and Shelly Gruhn and her husband, Todd of Manning, Iowa; three grandchildren, Nick Solberg and his wife, Jeanna of Moorhead, Iowa, Sarah Gruhn of Ute, Iowa and Adam Gruhn of Manning, Iowa; one granddaughter-in-law, Doris Solberg of Moorhead, Iowa; two great-grandchildren, Sidney and Braiden Solberg of Moorhead, Iowa; one sister, Mary Grindstaff of Baltimore, Maryland; one brother, Mike Olson and his wife, Pat of Wesley, Iowa; one sister-in-law, Norma Olson of Fort Dodge, Iowa; other relatives and friends. Mass of Christian Burial was held 10:30 A.M., Friday, January 17, 2020, at St. Rose of Lima Catholic Church in Denison, Iowa. Fr. Randy Schon served as Celebrant of the Mass with interment in the St. Rose of Lima Catholic Cemetery in Denison. Organist Jean Cornelius provided accompaniment for the St. Rose of Lima Choir. Tom Olson served as Eucharistic Minister, Vickie Hall and Karen Carlson served as lectors. Thursday services included the Knights of Columbus Honor Guard, Knights of Columbus Rosary at 5:30 P.M. and a Prayer Service at 6:30 P.M. led by Fr. Shon. Serving as honorary pallbearers were Larry Mathison, Mike Mathison and Sarah Gruhn. Serving as pallbearers were Richard Ballantyne, Larry Solberg, Nick Solberg, Kenny Olson, Adam Gruhn and Todd Gruhn. Military Honors were members of the American Legion Post 8 of Denison. The family invited everyone to the Parish Center for fellowship and lunch provided by the St. Rose Altar Guild and catered by Staley's. The Huebner Funeral Home was in charge of arrangements.

To plant a tree in memory of Kay Olson as a living tribute, please visit Tribute Store.