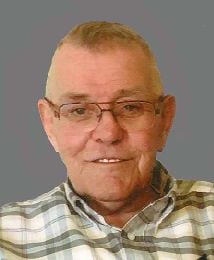 Louis Thies Poggensee February 21, 1942 - March 21, 2020 Louis Thies Poggensee and his twin sister Louise were born in a raging blizzard February 21, 1942. They were born at home in Denison, Iowa, the seventh and eighth children of Herman and Elsie Thies Poggensee. Louis passed away Saturday, March 21, 2020, at the Crawford County Memorial Hospital in Denison, Iowa, at the age of seventy-eight. Louis was baptized into Christ April 24, 1942, at Zion Lutheran Church in Denison and confirmed his faith at Zion April 14, 1957. He grew up in Denison, attended school and graduated from Denison Community High School in May of 1960. Louis then helped farm for the next seventeen years for his brother-in-law and for himself. Louis met Stephanie Adams from Missouri Valley when she was employed at Eventide in Denison. They were married September 17, 1977, and the couple made their home in Denison. For the next twelve years, Louis worked for Dubuque Pack. When the plant closed in 1989, Louis worked part time for Farm Service Coop until he was hired as a waste water plant operator for Denison Municipal Utilities. Louis was employed by DMU until he retired in January of 2008. He enjoyed retirement until 2009, when his health failed due to colon and kidney cancer and he eventually needed to go on dialysis. Preceding him in death were his parents; his wife, Stephanie; three sisters, his twin Louise on April 24, 1942, Minnie and Alvina; three brothers, Walter, John and Arnold; and two brothers-in-law, Earl and Clarence. Louis is survived by five brothers, Ernest, Edward, Robert and his wife, Marge, Donald and his wife, Pam, and Herman and his wife, Jackie; brother-in-law, LaVerne; three sisters-in-law, Alma, Florence and Phyllis; nieces, nephews, other relatives and friends. Private Family Services were held 11 A.M., Saturday, March 28, 2020, at the Huebner Funeral Home in Denison, Iowa. Rev. Joshua Keinath officiated the service with interment in the Mount Carmel Cemetery in Missouri Valley, Iowa. Recorded music selections included "How Great Thou Art" by Elvis Presley, "On Eagles' Wings" by Josh Groban and "Go Rest High on the Mountain" by Vince Gill. Serving as honorary pallbearers were Larry Campbell, Vicki Delong, Butch Munson, Jim Harm and Jack McDuff. Serving as pallbearers were Justin Poggensee, Charles Poggensee, Doug Poggensee, Kevin Poggensee, Jeff Poggensee and Joe Poggensee. The Huebner Funeral Home in Denison was in charge of arrangements.

To plant a tree in memory of Louis Poggensee as a living tribute, please visit Tribute Store.

Louis lived right across the street from us in Ft. Purdy for many years before we moved in 1983. Louis was a great neighbor. My brother Denny used to scoop Louis' driveway in the winter. Louis was a good man and I know he will be missed by many. My condolences to all of Louis family and friends. May he rest in God's arms.