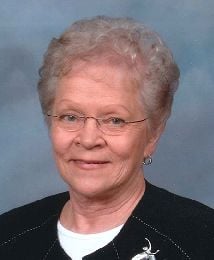 Marjorie Kay Reese February 23, 1938 - March 6, 2020 Marjorie Kay Reese, daughter of Oscar and Helen (Johannsen) Harder was born on February 23, 1938 in Battle Creek, Iowa. She was baptized at the Battle Creek Lutheran Church on March 28, 1938, and confirmed at Immanuel Lutheran Church in Schleswig, Iowa in 1953. She attended school in Schleswig and graduated with the class of 1956. On November 9th of 1963, Kay was united in marriage to Dale Reese in Las Vegas, Nevada. They made their home in Garden Grove, California and moved back to Schleswig in 1974 where Dale owned and operated Schleswig Plumbing and Heating. Kay enjoyed working as the book keeper for the business. She also enjoyed fishing, dancing, traveling, entertaining and spending time with her family and friends. Kay passed away on March 6, 2020 at the Eventide Lutheran Home in Denison, Iowa having attained the age of eighty-two years and twelve days. In addition to her parents, she was preceded in death by her sister Lois Sahl, her son Todd Reese, her sister-in-law Dotty Gomer, as well as her brother-in-laws, Arthur Reese, Lewis Reese, and Robert Reinking. She is survived by her husband Dale Reese of Denison, Iowa; daughters Crystal Bretthauer of Mapleton, Iowa and Kim Reese of Oakland, Nebraska; her daughter-in-law Kathy Fritz of Battle Creek, Iowa; her sister Pat and husband, Duane Sharp of Longmont, Colorado; her sister-in-law, Mick Reinking of Orange, California; her grandchildren Brook Bretthauer and husband, Jeremy Shufflebarger, Megan and husband, Gerrett Frehse, Alyse Bretthauer, Darin Fritz, Keelie Reese and fiancé, Kevin Wortman, Tayton and wife, Samantha Reese; great-grandchildren Morgan Frehse, Keegan Bretthauer, Lexi Frehse, Kent Wortman, Brevan Shufflebarger, Kenley Bretthauer, Brynn Shufflebarger, Kendel Wortman, Bexley Reese, and Kenna Wortman, as well as one great-grandchild on the way; nieces and nephews, other relatives and many friends. A public visitation was held at Immanuel Lutheran Church of Schleswig, Iowa on Saturday, March 14, 2020, with Pastor Merle Mahnken officiating. The funeral service was held immediately after the visitation, also at the church. Music was provided by Marlene Hight along with the participation of the family and friends. Brook Bretthauer, Megan Frehse, Alyse Bretthauer, Darin Fritz, Keelie Fritz, and Tayton Reese were honorary urn bearers. The family invited everyone to the fellowship hall for a luncheon provided by Lidderdale and served by the women of the Immanuel Lutheran Church. Burial was held at Morgan Township Cemetery in Schleswig, Iowa. Pauley Jones Pfannebecker Funeral Home was in charge of arrangements.

To plant a tree in memory of Majorie Reese as a living tribute, please visit Tribute Store.