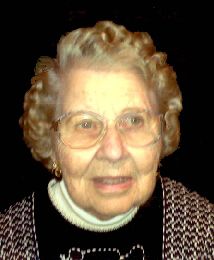 Elvira Anna Riessen January 10, 1923 - April 22, 2020 Elvira Anna Riessen was born January 10, 1923, in Battle Creek, Iowa, the daughter of Carl and Marie Korner. She passed away Wednesday, April 22, 2020, at Denison Care Center in Denison, Iowa, at the age of ninety-seven. Elvira resided with her family north of Battle Creek until moving north of Charter Oak in March of 1934. She received her education in rural schools near her home and attended Charter Oak High School. Elvira was united in marriage to Raymond Riessen June 8, 1940, in Charter Oak. In 1941, they moved to rural Denison and the couple was blessed with one daughter, Lois. Raymond passed away October 12, 1980, and Elvira continued to live in rural Denison until 1983 when she moved to Charter Oak. In 1990, she moved back to rural Denison and in April 2005, she moved to Oakwood Manor in Denison. Since November 2016, Elvira has resided at Denison Care Center. In addition to being a farmer's wife and assisting her husband on the farm, Elvira was employed as a server at Cronks and Jo-Mart restaurants until 1973. In her leisure time, she enjoyed sewing, gardening, canning, going to the Farmers Market, holding garage sales and listening to the Polka Party. She loved baking, especially cookies, cakes and brownies. Elvira still had rationing stamps from the Depression amongst her possessions. Elvira was preceded in death by her parents; her husband, Raymond; and her son-in-law, Alan. Survivors include: her daughter, Lois; two grandchildren, Mark, and Michelle and her husband, Lance; one great-grandchild, Dominic and his wife, Grace; two great-great-grandchildren, Daniel and Titus; special friends who called her grandma: Jasmine, Isaiah and Savanna; other relatives and friends. Private Family Services were held 2 P.M., Saturday, May 2, 2020, at Huebner Funeral Home in Denison, Iowa. Rev. Richard Merrill officiated the service with interment in Crawford Heights Memory Gardens in Denison. Recorded music selections included "Save a Place for Me" by Matthew West, "I Can Only Imagine" by Mercy Me and "Heaven Song" by Phil Wickham. Serving as honorary pallbearers were Daniel Means, Titus Means and Zoey Means. Serving as pallbearers were Dominic Means, Mark Johnson, Isaiah Means, Lance Means, Rona Bromert and Don Lally. The Huebner Funeral Home in Denison was in charge of arrangements.

To plant a tree in memory of Elvira Riessen as a living tribute, please visit Tribute Store.