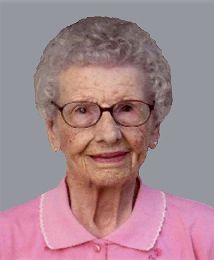 Willetta Anna Sander August 13, 1912 - February 4, 2020 Willetta Anna Sander, the daughter of Harry and Laura Kruse, was born August 13, 1912, on the family farm near Manning, Iowa. She was baptized and confirmed at Zion Lutheran Church in Manning. Willetta passed away Tuesday, February 4, 2020, at Eventide Lutheran Home in Denison, Iowa, at the age of one hundred seven. She attended Hayes Township Country School #7 and as a young girl, she worked for neighbors and helped her parents on the farm. She also helped her aunt wallpaper in the Manning Hotel. On August 8, 1934, she was united in marriage with William E. Sander and resided in Manning. They were blessed with the birth of four daughters: Corrine, Marlys, Judith and Susan. The couple lived in Manning, then moved to Okoboji and later moved back to Manning. They moved to the Kruse farm in 1945.In 1952, they moved to Schleswig where they operated a bar and grill. In 1964, they moved to Denison and both worked at Midwestern College. After Bill's death, Willetta worked at the Denison School as a cook until her retirement in 1984. Bill and Willetta were great dancers and enjoyed polka dances at the Five Mile House as well as other places. Willetta's family was very important to her and time spent together was something she looked forward to. She loved socializing, playing cards, jigsaw puzzles, word search, watching game shows on television and also NASCAR. She enjoyed going to the Senior Center for many years and well as shopping trips with her daughters. Traveling with friends and family and going to baseball games were also pleasurable for her. Willetta was preceded in death by her parents, Harry and Laura; husband, William in 1968; daughter, Corrine in 1985; sons-in-law, Wayne, Vertus and Marvin; granddaughter, Kathy; great-granddaughter, Rachel; sisters and husbands, Florence and Bill and Delores and Ray; mother-in-law and father-in-law, Katie and Emil; brothers-in-law and wives, Herman and Esther, Hugo and Florence, Louie and Lora, Max and Evelene, and Harry and Viola; and numerous nieces and nephews. Those left to cherish her memory include: three daughters, Marlys, and Susan and Keith, and Judi; fourteen grandchildren; thirty-one great-grandchildren; twenty-nine great-great-grandchildren with three more to be born in the spring; nieces; nephews; other relatives and friends. Not many are so blessed to have their mother with them for so many years. She led by example to respect and be kind to others. Most of all, she taught us to love one another. She taught us to pray and to love our Lord and Savior. We shared much happiness, lots of love and also many tears for the loss of our loved ones. We can only pray that she was as proud of us as we are proud to have her as our mother. Mom always said, "Be positive and do your best." Mom, thank you for being you. Funeral Services were held 10 A.M., Saturday, February 8, 2020, at Zion Lutheran Church in Denison, Iowa. Rev. Joshua Keinath officiated the service with interment in the Manning City Cemetery in Manning, Iowa. Organist Karen Kahl provided accompaniment for congregational hymns "In the Garden," "How Great Thou Art" and "Just a Closer Walk with Thee." Serving as pallbearers were Mike Brookbank, Kevin Groth, Keith Groth, Rusty Siefken, Ryan Siefken, Jeff Jahn, Randy Jahn and Rick Jahn. The family invited everyone to return to the church for fellowship and lunch provided by the Ladies Aid. The Huebner Funeral Home in Denison was in charge of arrangements.

To send flowers to the family of Willetta Sander, please visit Tribute Store.