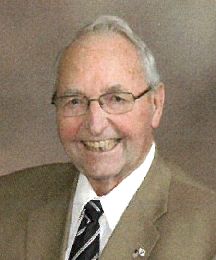 Melvin Bernard Schechinger December 29, 1927 - December 26, 2019 Melvin Bernard Schechinger, son of Valentine Sr. and Martha (Schmitz) Schechinger, was born at home on December 29, 1927, in Westphalia, Iowa. He attended school at St. Boniface in Westphalia and started farming after graduating from high school. Then in 1951, he was drafted into the US Army during the Korean War and served as a Priest's Assistant for Father Elias in Anchorage, Alaska. He was honorably discharged with the rank of Corporal, in 1953. On February 20, 1954, Melvin was united in marriage with his best friend, Rita Langenfeld. Together they had eight children and made their home on the farm northwest of Manilla. Here he raised his family and followed his lifelong passions of farming and raising cattle. In 1972, Rita passed away from lymphoma, prompting the family to pull together. Melvin was committed to keeping his family together and met the challenges of raising eight young children while running a farm operation with love and determination. After he retired he continued to stay active with his sons' farming operations, driving truck and caring for cattle. Melvin was a member of Sacred Heart Church in Manilla where he served on the board and was a 4th Degree Knight (Navigator). He was a member of the Manilla Rough Rider's Saddle Club and served as a Trustee for the Nishnabotna Cemetery. He was honored to be Manilla's Quasqui-King and was awarded the 2011 IKM-Manning Iowa Farm Bureau Sportsmanship Award. Family time was his top priority; he loved horseback riding, camping and cheering on his grandchildren at their sporting events. Melvin was known for his smile, never knew a stranger, and always had a Tootsie Roll in his pocket. On Thursday, December 26, 2019, Melvin passed away at the Crawford County Memorial Hospital in Denison, Iowa, two days before his 92nd birthday. Melvin is survived by his children: Pamela (Reggie) Schwartz of Urbandale; Daniel (Rita) Schechinger of Manilla; Scott (Helen Richardson) Schechinger of Manilla; Terence (Jody) Schechinger of Manilla; Dale (Kathy) Schechinger of Manilla; Janet (Jeff) Graen of Grimes; Jay (Jeanna) Schechinger of Manilla; Mae (Jeffrey) Saunders of Nevada; 30 grandchildren; 50 great-grandchildren and counting; sister Janette Chipman of Harlan; brother-in-law Bob Langenfield of Red Oak; sister-in-law Delores Langenfeld Jacoby of Waterloo. He was preceded in death by his parents; wife Rita; seven siblings: Marieann Redding, Evelyn Coenon, Valentine Jr., Ella Marie Nielson, Anthony and Ellsworth; special friend, Eileen Heiden; as well as many other family and friends. www.ohdefuneralhome.com.

To send flowers to the family of Melvin Schechinger, please visit Tribute Store.