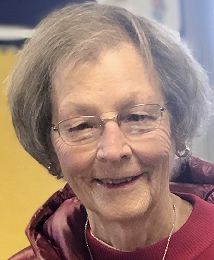 RoseMarie Schoessler April 24, 1942 - April 5, 2020 RoseMarie Charlotte Schoessler, age 77, of Lake Ozark, MO, passed away on April 5, 2020. RoseMarie was born on April 24, 1942 in Deloraine, Manitoba Canada to Rachel and Charles Beernaert and raised in Deloraine. She attended school in Dand and in Deloraine. After graduation she worked in Winnipeg, Manitoba and Calgary, Alberta. She loved to travel. She and her friend, Maria, spent 2 years traveling throughout Europe and England on their motorbikes. To earn travel money they would work a variety of odd jobs. At one such job she worked at the American base in Stuttgart, Germany where she met Paul. Paul and RoseMarie were married on June 10, 1967 in Deloraine. To this union five children were born; Rachelle, Steven, Mark, Greg and Paulette. After the wedding, they returned to Stuttgart. Upon Paul's discharge from the Army, they settled in Westside, Iowa where she worked at the telephone office for a few years. They then moved to Denison, Iowa where she worked as an aide at the Denison Community School. Upon retirement, Paul and RoseMarie moved to Lake Ozark, Missouri. She enjoyed playing bridge, spending time with the grandchildren, and visiting with people, especially the guests at Point Randall Resort. Her Catholic faith was an important part of her life. She attended daily Mass and enjoyed volunteering at Our Lady of the Lake Catholic Church. In addition to her other activities, she continued to travel to destinations including New Zealand, Australia, Israel, Ireland, London, and Belgium where she visited extended family. She was preceded in death by her parents; her parents-in-law, Arthur and Edith Schoessler; her brothers George, Clarence, and Charles; sisters-in law, Kathleen and Mary (Beernaert) and Rosalie and Neva (Schoessler). RoseMarie is survived by her loving husband and soulmate of 52 years, Paul; her children, Rachelle (Kevin), Steven, Mark (special friend Kimberly), Greg (Lisa), Paulette (Michael); 6 grandchildren; 2 great grandchildren; and many nieces, nephews and friends. In lieu of flowers, please consider making a donation to the Westside Auxiliary, the Westside Community Club, St. Rose of Lima School or Our Lady of the Lake Catholic Church. Private Family Services were held 11:00 A.M. Wednesday, April 8, 2020, at the Huebner Funeral Home in Westside, Iowa. Fr. Randy Schon officiated the service with interment in the Westside Cemetery in Westside. Service participants included Anna Schoessler, Hallie Schoessler and Kathleen Spriggs. Recorded music selections included "Ave Maria" by Celine Dion and "Beyond the Sunset" by Bill & Gloria Gaither. Serving as pallbearers were Patrick Schoessler, Conrad Schoessler, Jacob Schoessler, Isaac Schoessler, Rolly Schoessler and Brody Spriggs. The Huebner Funeral Home in Westside was in charge of arrangements.