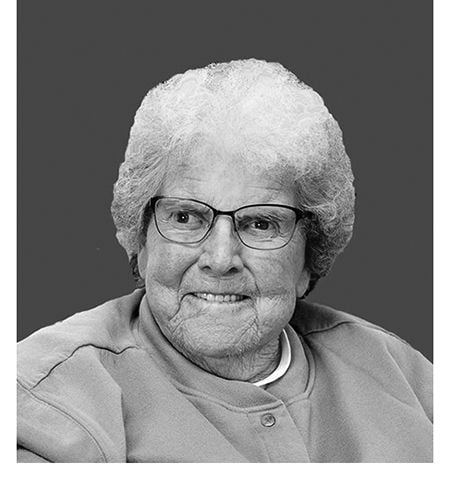 Bonnie Jean Segebart October 13, 1931 - December 27, 2019 Bonnie Jean Segebart was born October 13, 1931, at Calumet, Iowa, the daughter of Herman and Winifred Hoemann. She passed away Friday, December 27, 2019, at St. Anthony Regional Hospital in Carroll, Iowa, at the age of eighty-eight. Bonnie was baptized into Christ and confirmed her faith at Zion Lutheran Church in Denison. She received her education in the East Boyer #9 School. After completing her education, Bonnie worked for her sister Margaret as a homemaker. She then was employed at the Manilla egg plant just before her marriage July 15, 1953, to Harold Segebart in Omaha, Nebraska. The couple made their home in Crawford and Ida Counties and Bonnie became a farm wife, tending to the household duties, helping with the farm chores and raising their children, Steven, Randy, Marilyn and Kevin. After retiring, Bonnie and Harold moved to Denison. Bonnie loved to travel and enjoyed wintering in Arizona, visiting relatives in Missouri and going to the casino. Socializing over Bingo and playing cards, especially with the grandchildren, visiting with friends and bowling every Thursday night provided many hours of entertainment for her. Bonnie enjoyed Word Find books and watching Price is Right, soaps and Wheel of Fortune on television. In her younger days, dancing was a favorite activity and she continued to listen to country music and polkas. Bonnie worked hard on the farm, canning, gardening, raising chickens and milking cows, but found time to enjoy cooking and baking, especially bars and sweets which were enjoyed by many. Preceding Bonnie in death were her parents; two sons in infancy, Ronald and Harold Jr.; two grandsons, Grady and Eddie; one great-grandson, Jason; two brothers, George and Kenneth; and two sisters, Margaret and Dorothy. Survivors include: her husband, Harold; three sons, Steven and his wife, Joyce, Kevin, and Randy and his wife, Lori; one daughter, Marilyn and her husband, David; fifteen grandchildren; ten great-grandchildren; one brother, Don; a very close and dear friend, Patricia; other relatives and friends, Funeral Services were held 10:30 A.M., Saturday, January 4, 2020, at Our Savior Lutheran Church in Denison, Iowa. Rev. Joshua Keinath officiated the service with interment in the Zion Lutheran Cemetery in Denison. Organist Karen Kahl provided accompaniment for congregational hymns "Lift High the Cross,' "Amazing Grace," "How Great Thou Art" and "I Know That My Redeemer Lives." Serving as honorary pallbearers were Kimberly Rothmeyer, Cassie Fredrickson, Rebecca Segebart, Amanda Segebart, Melissa Segebart, KayLyn Segebart, Crystal Harvey, Jaime Segebart, David Bagley and Carly Segebart. Serving as pallbearers were Josh Fredrickson, Anthony Harvey, Bobby Segebart, Justin Segebart, Cody Segebart and C.J. Segebart. The family invited everyone to return to the church for fellowship and lunch provided by the Zion Ladies Aid and catered by Staley's. The Huebner Funeral Home in Denison was in charge of arrangements.

To plant a tree in memory of Bonnie Segebart as a living tribute, please visit Tribute Store.