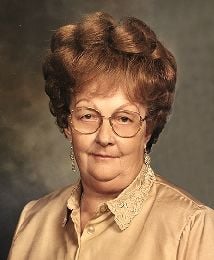 Ruth Seieroe March 23, 1931 January 7, 2020 Ruth Marie Seieroe, the daughter of William and Iva (Ehlers) Knutzen, was born March 23, 1931, in Monona County, Iowa. Ruth was raised on the family farm south of Ute, Iowa and received her education from Ute High School. On September 14, 1950, Ruth was united in marriage to Wesley Seieroe in Ute. The couple was blessed with two children: Rick and Carolyn. The family was engaged in crop and livestock farming. In 1954, they moved to a farm near Soldier and to a farm south of Ute in 1956. They purchased their forever farm in 1965, a farm which had belonged to Ruth's great grandfather. The couple remained on the farm until 2007 when they moved to their home in Ute. Ruth and Wesley loved to travel together, having been to Hawaii, Texas, Florida, California, Tennessee, Las Vegas and on a Caribbean cruise. The greatest adventure they had, however, was their multiple trips to Alaska. Ruth was a member of the St. Paul Lutheran Church of Ute and a member of the ladies aide society. She enjoyed cooking, baking and playing cards with their neighbors. Ruth will be greatly missed by those who knew and loved her. Left to cherish her memory include her son Rick (Patricia Hardy) Seieroe of Ute, IA; nieces, nephews, extended family and friends. She was preceded in death by her parents William and Iva Knutzen; husband Wesley Seieroe; and daughter Carolyn Seieroe.

To plant a tree in memory of Ruth Seieroe as a living tribute, please visit Tribute Store.