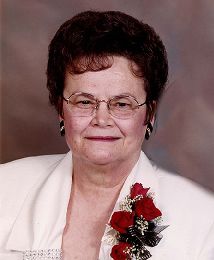 Theresa Elizabeth Topf March 9, 1929- November 20, 2019 Theresa Elizabeth Topf of Denison, Iowa, formerly of Charter Oak, Iowa, was born March 9, 1929, in the home of her parents, Cornelious and Elizabeth (Wakehouse) McHugh on their farm near Orson, Iowa. She was the youngest of eight children. Theresa passed away Wednesday, November 20, 2019, at Reed Place in Denison, Iowa, at the age of ninety. Theresa graduated from Pisgah High School, then took teaching courses through the University of Northern Iowa and taught at #5 Morgan Center near Schleswig for three years. At one time, Theresa had nine grades, kindergarten through eighth grade. August 10, 1950, Theresa married Clarence Topf at Saint Ann's Catholic Church in Pisgah, Iowa. They took up residence on a farm near Charter Oak. They were blessed with the birth of four children: Patricia, Dennis, and twins Karen and Sharon. During the spring of 1997, they built a home next to Saint Boniface Catholic Church and moved to Charter Oak. Theresa was President of Saint Boniface Ladies Society in 1963 when President John Kennedy was shot. Theresa's family was very active in 4-H for many years. She served as leader and, at times, assistant leader of the Merry Maidens from 1970-1974. In 1983, Charter Oak celebrated its Centennial and Theresa wrote the history of Saint Boniface Catholic Church. Theresa and her husband Clarence and family donated and displayed the Historical Wall in the church basement and entrance of church. Preserving our heritage and encouraging awareness of our heritage were her hobbies. Theresa was a member of the Unusual Club. Uppermost in Theresa's world was devotion to Our Lord and The Blessed Virgin Mary. Theresa and Clarence's yard displays a Shrine of Mary which is lighted year around. The Topfs all attended Mass at Saint Boniface in Charter Oak and their children were all married there, with the exception of Dennis and Lori, who exchanged vows at Lori's home parish, Saint Patrick's in Dunlap. Theresa is a Charter Member of Trinity Heights in Sioux City, a favorite place for the family to visit. Dale Lamphere, a sculpturer for Trinity Heights, made the Shrine Statue of Mary displayed in their yard. His studio is in South Dakota where the Shrine of Mary was made. Theresa and Clarence enjoyed touring his studio. Theresa and Clarence were Eucharistic Ministers at Saint Boniface. She was honored to continue this ministry. Survivors include: her children, Patricia Reed of Des Moines, Dennis Topf and wife, Lori of Charter Oak, Karen Palmersheim of Manchester and Sharon Thill and husband, Randy of Pleasantville; grandchildren: Amanda Clausi, Zachary Reed, David Topf (Nikki), Ryan Topf, Kathie Jo Whitt (John), Daniel Palmersheim (Debbie), Andrew Palmersheim, Thomas Thill, John Thill (Whitney); great-grandchildren: (Reeds) Theodosia, Bobby, and Peyton; (Thills) Braxton, Tatum, Skylinn, Lillian and Weston Whitt; great-great-granddaughter Layla; sister, Alicia Mahoney of Council Bluffs; sister-in-law, Ann McHugh of Royal; and a host of relatives and friends. She is preceded in death by her husband Clarence of 63 years; her parents, Cornelious and Elizabeth McHugh; parents-in-law, John and Leona Topf; brothers, Lawrence McHugh and Clifford McHugh; sisters, Lucy (Kenneth) Perry, Mildred (James) Paseka, Cleta McHugh, Mable (Voyne) Harris; and son-in-law, Randy Palmersheim. Mass of Christian Burial was held 10:30 A.M., Monday, November 25, 2019, at St. Boniface Catholic Church in Charter Oak, Iowa. Fr. Randy Schon officiated the service with interment in the parish cemetery. Organist EveVonne Muff provided accompaniment for congregational hymns and for vocalists Doug and Nancy Jenson. Sharon Thill served as lector, Ace and Ella Staley served as Altar Servers, Sharon Thill, Karen Palmersheim and Debbie Palmersheim served as Eucharistic Ministers, and gift bearers were Theresa's Grandchildren. Serving as pallbearers were Daniel Palmersheim, Andrew Palmersheim, Zachary Reed, Thomas Thill, Ryan Topf, David Topf , John Thill and John Whitt. Sunday Services included a 5:30 PM Prayer Service and a Rosary at 7 PM. The family invited everyone to the Charter Oak Community Building for fellowship and lunch provided by the St. Boniface Altar Guild and catered by Staley's. The Huebne Funeral Home was in charge of arrangements.

To plant a tree in memory of Theresa Topf as a living tribute, please visit Tribute Store.