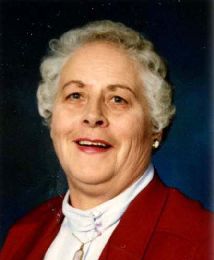 Marian Genalle Winey April 27, 1934 - August 21, 2019 Marian Genalle Winey was born April 27, 1934, in Hayes Township, Crawford County, Iowa, the daughter of Jordan and Helen Starek. She passed away Wednesday, August 21, 2019, at the Denison Care Center in Denison, Iowa, at the age of eighty-five. Marian received her early education in a country school near her home and then attended Vail High School. She continued her education and graduated from beauty school. She opened a beauty shop in 1955, but discontinued that after she was married. On January 1, 1956, Marian was united in marriage to Carlin Winey at the Vail Presbyterian Church. She was a homemaker and also was employed as a janitor at the Ar-We-Va School and at the Presbyterian Church in Vail. Spending time with her granddaughters provided many hours of joy and contentment for Marian. She enjoyed watching television, camping, and bookkeeping. Her dog "Lucky" was also a special part of her life. Marian was preceded in death by her parents, Jordan and Helen; her husband, Carlin; her daughter, Diana; and her brother, Jerald and his wife, Kathy. Survivors include: one son, Louis and his wife, Dawn; two granddaughters, Nicole and Rachel; one great-granddaughter, Azalea; two sisters, Norma and husband, Al, and Deb and husband, Steve; other relatives and friends. Memorial Services were held 3:00 P.M., Wednesday, August 28, 2019, at the Huebner Funeral Home in Denison, Iowa, with Rev. Robert Cook officiating. Recorded music selections included "Amazing Grace" by Bill & Gloria Gaither and "The Lord's Prayer" by Richard Cary. Serving as honorary pallbearers were Rachel Kreutz, Nicole Winey and Bobby Starek. The Huebner Funeral Home in Denison was in charge of arrangements.

To plant a tree in memory of Marian Winey as a living tribute, please visit Tribute Store.